The Rock, the WWE Championship and why having him win at the Royal Rumble was the best way to go! By Daniel Bradley 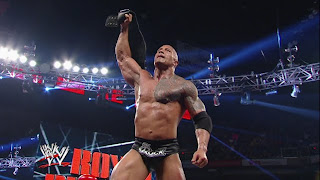 The Rock, as we all know, is an actor, but he’s not just any actor, he is a massive Hollywood movie star. Many people take digs at his movies: ‘Race to Witch Mountain’, ‘Tooth Fairy’ and ‘Journey 2: The Mysterious Island’ but what they don’t know, or do know but don’t mention, is that those three movies combined earned in excess of $540,000,000 in the Box Office. Compare that to WWE movies that the likes of John Cena and Kane were in and it will put it into perspective. WWE’s golden child, John Cena’s ‘The Marine’ earned just over $22,000,000 whilst Kane’s ‘See No Evil’ only earned around $15,000,000.

As well as kids movies that Dwayne ‘The Rock’ Johnson appears in; he is also in a lot of well known action and comedy movies too: he was in ‘The Other Guys’ with Samuel L. Jackson, Mark Wahlberg and Will Ferrell; ‘Be Cool’ with John Travolta and ‘Get Smart’ with Steve Carell and Anne Hathaway.

In the first half of 2013 he has 4 movies coming out: Snitch, G.I. Joe: Retaliation, Pain & Gain and Fast and Furious 6. Between now and Wrestlemania 29 he will be either on Raw progressing the storyline he’s involved with or out promoting movies…with the WWE Championship.

The Rock will show up all over the country; for interviews, movie premiers – you name it; and all the while he will be holding the WWE Championship. He also has over 4,000,000 Twitter followers; just imagine the amount of people over the coming weeks; wrestling fans or non wrestling fans that will see him with the title.

The Rock as WWE Champion, especially if he holds it until Wrestlemania 29 can bring in a lot of PPV buys and at the end of the day that’s what’s best for business, right?

The Rock came in to Wrestlemania 27 to guest host, granted, the PPV wasn’t great, but the WWE still managed to surpass their goal and got a buyrate of over 1,000,000 which I believe was up at least 150,000 from the year before. The Rock came back for Wrestlemania 28 and the buyrate increased yet again this time to 1,300,000. If it isn’t clear already…The Rock is a draw. Having him as WWE Champion can only mean good things for WWE.

Regardless of whether he faces John Cena, CM Punk, Brock Lesnar, Undertaker, Dolph Ziggler, Randy Orton or someone else; know that, he will drop the title, probably and hopefully at Wrestlemania and thus, putting someone over. I know a lot of the smarter and more hardcore fans if you will, hate the idea of a Cena vs. Rock 2; but the fact of the matter is – most kids and casual fans; which there seem to be more of these days; would love for ‘The Great One’ and ‘Mr Hustle Loyalty Respect’ to have another match. Who knows; maybe John Cena wins and then Dolph Ziggler cashes in on him. Now, no one would see that coming, would they?

All in all I think people should stop moaning all over Twitter, Facebook, Youtube and Internet forums. People on the Internet; and I know I am on the Internet; but people on the Internet that constantly moan about WWE, TNA and any other wrestling promotion should just quit watching it! I don’t watch TNA because every time I try to get into it I just cringe at the storylines and use of old wrestlers such as Hulk Hogan and Sting; but I’m not online posting negative comment after negative comment like a lot of people tend to do. That is pointless.

Raw is on tonight and The Rock won’t be there and so what! The WWE Champion doesn’t have to be on every show. I’m sure people will moan “WWE Champion doesn’t appear on Raw” or “The Rock is never here, so much for never going away” etc. Again; if you don’t like the product, don’t watch it. It’s that simple.

Anyway he’s probably away promoting his new TV Show that’s coming out soon called ‘The Hero’ and guess what he’ll have with him? That’s right! You guessed it, the WWE Championship.