WLH Book Review By Jimmy Wheeler - Wrestling at the Chase: The Inside Story of Sam Muchnick and the Legends of Professional Wrestling 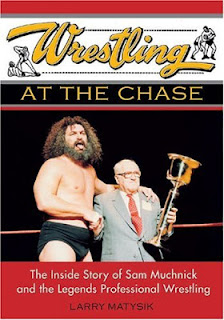 Who better to write the story of Sam Muchnick's brain child that was known as Wrestling at the Chase, than a man who was his friend and protege for many years, grew up watching the program, became a commentator for the promotion who would finally go on to run his own promotion; Larry Matysik. The show itself is widely considered one of the most prosperous wrestling programs from the territory based days, with consistently high ratings in the St. Louis area behind only the local news and the St. Louis Cardinals.

Larry Matysik allows the reader to see in to the world that was the very heart of the National Wrestling Alliance which Sam Muchnick was also the chairman of. This however is first and foremost a book about the St. Louis Wrestling Club and it's flagship program started in 1959 and would run for close to 30 years. Glimpses are given in to the workings of the NWA, insight behind decisions made by Sam that could only be provided by his close confident. As you would expect though, the writing focuses on the key parts that made Wrestling at the Chase a truly historically acclaimed wrestling program. Taking you behind the scenes into his own personal discussions with Muchnick, taking the reader inside Sam's mind explaining the way he booked matches, programs, storylines and why he, Larry feels he was the very best promoter in the business. Matysik goes on to look at Sam's overall philosophy of the business, the NWA world heavyweight championship, how it should be presented, and his view on what the audience needs. Not only does he provide this look through the door of the office, Matysik takes a look at the wrestlers who made an impact in the St. Louis area including 'King Kong' Brody, Dick 'The Bruiser, Dick Murdoch, and 'Wild' Bill Longson among others. Larry takes a look at how Sam was able to acquire such a varied array of talent to hold his shows, yet only ever holding a relatively small talent pool in his own area. A chapter aptly titled 'The War' covers what would be the coinciding time of Sam Muchnick retiring and Vince McMahon Jr's attempt to take over the wrestling business, Larry discusses the reasons for Muchnick's full retirement, what happened to the St. Louis Club and the similarities to how Sam had struck out on his own back in the late 50's. The book wouldn't be complete without a look at the aftermath of the closure of the St. Louis Club and the wrestling war. Larry Matysik sheds his opinion on what became of wrestling, the current state of it at time of the books release, he also briefly talks of his own employment in the World Wrestling Federation as it was then known, currently WWE.

Wrestling at the Chase is fairly easy read full of fun backstage stories, in ring antics to balance out the serious look at the demise of the territory system and an interesting look at possibly the only promoter no one has a bad word to say of. Even though Larry was a huge part of the whole operation, you forget this while he is authoring the book, besides at the beginning when he introduces what led to him working for Sam Muchnick and the aftermath, Larry Matysik only mentions himself when necessary choosing to focus on what he believes are the components which made Wrestling at the Chase the best television program ever made. For anyone that grew up watching this would be a great book to read and reminisce over what many consider a better time in the wresting business. An intriguing book to anyone interested in the history of the NWA and the very man responsible for it also for fans of the wrestlers highlighted through-out.