The Art of Wrestling By Jose Haze 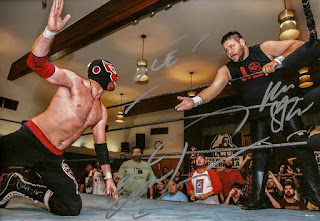 Devin Chen has established himself as one of the very best wrestling photographers around. Consistently producing photos with insane angles, amazing timing and reaction, Devin is the wrestling fan with a camera in his hand and a picture in his mind.

It is no coincidence his first taste of wrestling was an inferno match between The Undertaker and Kane back in 1998, probably the most visually stimulating match in the history of the WWF/E. From there he became an avid player of the N64 classic “WWF No Mercy”, which led to religious viewing of WWE Smackdown. “I fell in love with it. The characters, the color, the music, the stories….. It was so much fun”.

From the start, Devin has always had a deep connection with things that grabbed hold of his visual appetite. “It began in Northern California. I discovered independent wrestling as a fan, going to of wrestling shows; and that’s how it really starts. ” He is one of the photographers at the famous All Pro Wrestling academy in Hayward as well as a few of the other local wrestling promotions.

As the years passed wrestling came and went for Devin, but the love for it was always there. A friend of his told him about wrestling promotion in southern California by the name of Pro Wrestling Guerrilla and asked him if he wanted to go see one of their shows. “ I ended up going to the show with him (Threemendous II), and up until that time it was the very best wrestling show I had ever been to…I had so much fun”. PWG became a monthly pleasure, driving down the 6 hours from the Bay Area with fans who he grew into friends with. All the while, Devin would bring along his camera, and take shots from the crowd.

“I would print up the photos and ask the wrestlers to sign them. It was really cool to see other people’s reactions to my photos. That’s something I still enjoy to this day.”

At Pro Wrestling Guerrilla’s 7th year anniversary, appropriately titled “Seven”, Devin shot his first full set of photos from a PWG show. “I was really happy with the photos from that night and wanted to show them to someone right away.” After the show, Devin approached Excalibur, the “Liaison to the Board of Directors” of PWG; and that was the beginning of it.

The rest has been history for Devin in PWG. As he has worked more and more shows, his artistry with the camera has developed. He always seems to be in the right place at the right time and have the perfect angle. “That comes from just trying different to get the same shots in different angles all the time. As a wrestling photographer it’s really fun getting to know the wrestlers’ styles and having an idea of what might come ahead”. Similar to a pro athlete, he spends a lot of time in “the film room”.

“I enjoy the energy that comes from watching wrestling. It’s really cool to see the different perspectives of matches. It’s art”.

One of the great things about Devin’s work is how it seems to tell the story of every show. Almost like a real life comic book. “I’m always conscious of trying to tell the story in the ring with the photos, and even more when I go through and edit the stuff” he says. “The photos are good when the shows are good and vice versa”. “Same with wrestlers… A good wrestler is going to come out really good in his pictures, and a not so good wrestler is going to come out …. Well… not so good”.
Along the way he has been able to develop great relationships in the wrestling business, and has gained a greater understanding of professional wrestling, which he feels shines through in his photos. “Learning the little intricacies of what goes into a match and having a better understanding of what they are doing in the ring created sort of a quiet confidence inside me”. 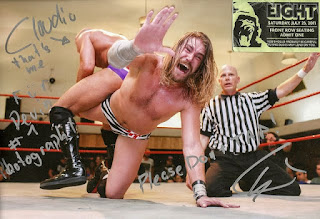 Similar to the wrestlers, much of a photographer’s success is motivated by what people with the most influence have to say about the work. “You can’t really succeed on your own if you don’t have the right support. A lot of the wrestlers have said nice things about me and my work, and that goes a long way “.

Still, Devin considers himself a wrestling fan. If he weren’t, he says, he would not be able to see some of the things he has captured with his camera. He is a fan of the stories told in the ring through headlocks and toeholds and psychology.
“I feel like the psychology in the ring and the photography go hand in hand” he says. “If I understand why a wrestler is doing a certain move or hold, I can then try and anticipate what he will do next”.

Nowadays Devin has begun to branch out, working in different places including some local WWE shows for the website Slam. Still he looks for opportunities to enjoy wrestling as a fan.

“I have been to Wrestlemania; and there’s still no other experience quite like it. It’s amazing that an event can draw a city full of wrestling fans everywhere. The atmosphere is amazing.”

With aspirations of someday making it to the big show, WWE full time, he shares the same desires as the wrestlers he takes pictures of. Part of this motivation is seeing the wrestlers he idolized in the independent scene - as they have moved on to the WWE.

“I feel a bit of a connection with those guys. It’s different when the same guys you took pictures of are now on your television screen. I want to be there; not here watching. I want the story of my pictures to be complete ”. 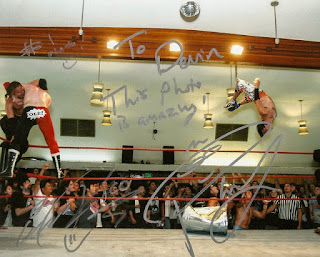 “El Generico.. There’s just something about him. Maybe it’s in the character. He is super crisp and just flows in the ring. Anyone who has watched his matches can understand the story of it without even knowing it!” Another of his favorites is Kevin Steen. “

“He works so well with the crowd, and is so exciting to watch in the ring. Not many people can channel the energy of the crowd like Kevin”.
I’m sure Devin will continue to have a lot to work with in PWG, but don’t be surprised if you see him someday on your TV screen… ringside.