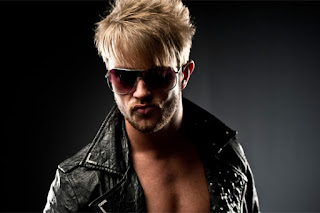 I had doubts how successful and entertaining TNA's British Bootcamp would be considering there were only 3 acts competing for a TNA contract, those being Marty Scurll, Rockstar Spud and the Blossom Twins. I found it hard to believe that a reality TV show would work with only three acts over the course of a TV series. However I after watching the full series, which compromised of six episodes each running for 20 minutes I have to say that I found the show to be an entertaining and deserving the positive reviews it has received. Here's an episode guide.

This is where Dixie Carter announced the competitors at a TNA fan event, we get packages on each of the three acts and a understanding of why they feel they should win. At the event Scurll get's the biggest reaction but that's to be expected since he's the babyface here. Spud insults him by reminding the fans that Scurll appeared on ITV's 'Take Me Out' dating show and that shows that he is a sad man. Scurll has to resort to slating Spud for wearing sunglasses indoors, the Blossom Twins basically look on while this is happening. You can tell they are taking this seriously as Rockstar Spud puts his chewing gum on Marty's trousers, oh the comedy.

To celebrate the opportunity all four decide to decide to hit the town. Marty and Spud try and fail to sort out their differences, the Blossom Twins attempt to mediate and aren't thanked for it. In a really sad low, Marty and Spud actually have a major row over the number of twitter followers they have in the limo. Finally Spud heads off into the night on his own, and according to TV footage sits in a London pub until 2am where there are no other patrons, they aren't playing music and he has bought his own bottle of Jagermeister. Suspicious? No it's a wrestling version of TOWIE obviously. Interestingly when showed clips of our wrestlers, the Blossom Twins footage came from OVW, could this be a hint?

At the end of the first episode it was revealed that 'Rollerball' Marc Rocco was going to be the trainer. After his exploits in Episode 1, Spud ended up feeling a little bit tender and was soon throwing up in the car park. Rocco was suitably not impressed, back to the training and the Blossom Twins were up first, they were pretty good not fantastic but absolutely fine. One of them hurt their ankle on a dropkick and gutted it through. Next up were the boys and here Marty Scurll used his superior wrestling ability to make Spud look a fool, annoyed Spud heads for the exit. Rocco brought him back and beat him up in the ring, Spud refeused to give in but looked awfully out of his depth.

At this point, Mr Rocco said that all four had shown enough ability that they could proceed through to the next part of the process. I can't possibly imagine anyone thought they would be any other outcome. Arguably the most pointless tease in TV history. Onto the publicity interviews in the UK, not a lot of really interesting comments, all though Marty Scurll saying he 'would do Dixie' and was thankfully giving a dressing down for such a ridiculous and stupid comment.

Off to appearing at a PROGRESS show where Jeremy Borash would be judging how they cut a promo in front of a live audience. Rockstar Spud did a nice job and helped out the Blossom Twins when he called them ring rats. This allowed them to state they could kick his ass, much to the fans delight. Finally we had Marty Scurll, as he's booked as the promotion's top babyface, he unsurprisingly won the fans votes. Spud however clearly beat him fair and square.

It's off to the States and making an appearance at TNA's biggest show of the year, Bound For Glory. Spud has a bit of nightmare with his luggage which is really quite amusing. At TNA, Spud reveals to Christy Hemme that Mary Scurll jerks off over her picture. I'm sure she really appreciated that. They then posed for with fans at a fanfest, well the Blossom Twins did there was not a lot of interest in either Marty or Spud.

They then attended the TNA Hall of Fame ceremony where they were seated with Kurt Angle who was pleasantly surprised about our UK competitors and gave some gentle teasing to Spud about his jacket. Later they met Dixie, Hulk and Sting who said the key to be successful was longevity. I thought the key was making people still believe that your important because you were a star in the 1990's. All four of our heroes were very respectful which was nice to see.

Finally they were told that they would be shown sitting in the front row at the Bound For Glory PPV for about 30 seconds, again it appeared to Rockstar Spud who made the most of this opportunity.

We start with Dixie sending the Blossom Twins off to a beauty salon, not sure what means. Both Hannah and Holly both seem happy with the results and the boys are complimentary when they pick them up. Wouldn't trust what Marty says though as he's been after trying to get off with Hannah from episode one.

They had a meeting with Dixie about their cameo at the PPV, Marty is told off about chewing gum. He clearly infringed on the gimmick of Mr Anderson, Spud got most praise although Dixie wasn't thrilled with his nod to Gene Simmons. They then went out drinking with the James Storm and to a bar showing TNA's Bound For Glory so they could relive Storm's win over Bobby Roode. All four went terribly over the top considering they actually saw this live. Storm was very nice to all of them, he got into a drinking contest with Spud which seemed to involve Jack Daniels. Spud got really wasted and started to strip, this got him kicked out.

Off to Ohio Valley Wrestling where Al Snow enjoyed giving them a bit of a hard time, he also points out that Marty Scurll can't even hit the ropes correctly. Don't give up Marty it didn't stop Kelly Kelly having a career in the WWE.

We get to witness a couple of tag team matches, first up is Spud & Scurll teaming against a pair of talent enhancers. Scurll decides he's going to use a new finisher and asks Spud if he can debut it here. Spud agrees, this match really took me back to the days of WWF Challenge circa 1991 although I'd let you decide if that is a good thing.

Spud swerves Marty and doesn't tag him in and instead giving him the finger. This apparently was the receipt for Marty making him look bad in front of Marc Rocco in episode two. This leads Al Snow and Doug Williams to wonder if Spud could be trusted in the ring or if he would go into business for himself.

Obviously no such problems for the Blossom Twins, they again have a decent showing. Well that's compared to some of the current TNA Knockouts, they are hardly mid 1990's All Japan Women standard but you can't have everything. They got good reviews from both Snow & Williams. Just like in the second episode we then had another pointless assessment to see if they would go forward to the last challenge on the final show. We know they are all going to make it, I really do not like these teases because no-one buys it all.

Finally Dixie announces who they will be facing in the Impact Zone in our final episode, the Blossom Twins vs. Gail Kim & Madison Rayne while Marty Scurll will go one-on-one with Rockstar Spud. Needless to say the boys are not happy.

We start by a ridiculous Hulk Hogan promo, did you know he once pressed a 700lb giant? Up first is Scurll vs. Spud, Spud does his usual entrance and as a result looks really good. Scurll comes out looking awfully excited, the match for what we see looks pretty good with Jeremy Borash and Magnus on commentary. We also get comments from Hulk Hogan which are typically useless, apparently a lot of the TNA roster can learn a lot from Marty and Spud. Not sure about that.
Scurll gets the win and again jumps around like a 8 year old who has had too much sugar. Backstage both men get praised by both Hogan & Dixie. Up next is the girls, the match was severely edited and because they were going against TNA stars they obviously lost. Again though they were greeted with kind words as they headed backstage.

Now it's decision time, again Hulk Hogan and Dixie Carter say that they are all a credit to wrestling but they can only be one winner. The winner is Rockstar Spud and to be honest he is definitely a deserving winner. Spud was overcome with emotion and said it proved he wasn't a failure and that wrestling wasn't just a dream. Marty and the Blossom Twins took the news pretty well.
Dixie though wasn't finished, she said they would all be a part of TNA's UK Tour and they were an opportunity for Marty Scurll and the Blossom Twins to become a part of TNA.

Overall it was a pretty fun ride and was better than I expected it to be, I was happy that Rockstar Spud was the winner. To me he was the standout competitor and if Bully Ray compared him to his 'Bastard Son' who am I to disagree. Saying that, I remember having a photo taken with Spud at ROH's first UK show back in 2006 and then a friend asking 'Who's your girlfriend?' after seeing it. It's amazing what can happen over the years.

Below, here is the final episode in full.