With El Generico To WWE, Who's Next? By Stu Rodgers 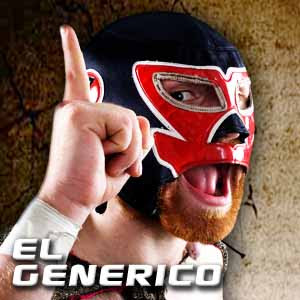 Listening to the Still Real To Us podcast recently I heard the guys chatting about El Generico signing with the WWE and who they think will be signed up next if any are. Generico is one of a list of guys that have been plucked from the indies in recent years such as CM Punk (OK, a good few years ago now), Bryan Danielson (Daniel Bryan), Tyler Black (Seth Rollins), Jon Moxley (Dean Ambrose) and more recently PAC (Adrian Neville).

Anyone who listened to me on The Indy Corner podcast over the last few months knows although I am an 'indy guy' when the wrestlers get the chance to go to the big time like WWE or even TNA then I always wish them well despite being annoyed that we will lose them off the indy scene. I wish them well because wrestlers in general have a long career so for them to get to WWE and make some big bucks so maybe they can retire with some decent money while hopefully still being healthy to enjoy their lives then I don't begrudge these guys doing this at all.

In saying that, there are very few if any wrestlers who break in who don't dream of going to the WWE and no matter how popular they are on the indies and Punk & Danielson were just that, the WWE I guess would of always been the pinnacle they were aiming for.

Now, thinking about who maybe next even though they have just reformed their tag team, The American Wolves, both Davey Richards & Eddie Edwards could be a good fit for the WWE if that's the route they want to take. Another one I feel the WWE could be having a look at is Ricochet, like PAC, this guy is phenomenal and if they do give the cruiserweight/junior heavyweight division a rebirth then Ricochet would be a perfect fit because the guy is amazing. Johnny Gargano is another guy who would be a great addition to any type of cruiserweight division. I've seen the guy on DVD loads of times in promotions like PWG, Dragon Gate USA and CHIKARA but when I got to see him live for the one and only time at Fight Club: PRO (vs Jonathon Gresham) in 2012 I realised then just how awesome of a wrestler he was.

In a different style, Kevin Steen is often mentioned of maybe going to the WWE, he's not what was 'typical' WWE, he's not like PAC or Ricochet, he's not even like Punk, Black or Danielson but he does offer something unique because, he doesn't the look the part so much but man, can the guy wrestle or what? Steen has been over the years involved in some great matches both for ROH & PWG and he can offer a different aspect to what the WWE has now and I wrote above how the WWE is probably the pinnacle of most wrestlers careers Steen makes no bones about it, he is a massive WWE fan and would love to work there.

2013 is only just over 3 weeks in so we'll just have to see who if any get the chance to work in the WWE.
Posted by WrestleFigsUK at 06:42