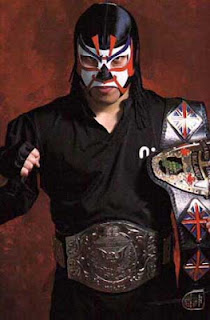 The Best of Michinoku Pro is a 12 disc set which covers the best matches of MPW from March 1993 to February 1998, which basically covers the golden years of the promotion. Michinoku Pro was the first Jap-Lucha promotion that really gained a cult status among wrestling fans and should be seen as a blueprint for the latter promotions of Toryumon and Dragon Gate.

A lot of wrestling fans became aware of Michinoku Pro thanks to the first Super Junior Cup held in 1994 where the Great Sasuke had a run to the final before losing to Chris Benoit. The tournament also featured Super Delfin and Taka Michinoku, Delfin also had a successful run in NJPW's Best of Super Junior tournament also getting to the final before coming up short to Jushin Liger.

Other fans had to wait until 1997, when Michinoku Pro wrestlers appeared at both ECW and WWF PPV events stealing the show. ECW fans were especially thrilled witnessing a classic 6 man tag which saw Great Sasuke, Gran Hamada & Yakushiji defeating bWo Japan representatives of Taka Michinoku, Terry Boy & Dick Togo. This went along way I would think to being the inspiration for ROH booking Dragon Gate 6 man tags as special attractions at their Supercard of Honor events.

Also as a quick note for fans who are not aware of MPW, Toryumon and Dragon Gate, tags are not required. If one wrestlers exits the ring then their tag partner can enter to replace them.

Singles matches aren't really what MPW were renowned for and Shiryu is nowhere near the worker he would become. Shiryu dominates the early minutes using among other things a huracanrana, an asai moonsalt and even a piledriver on the floor. Back inside the ring, Shiryu hits a reverse DDT and a tombstone piledriver for the first 2 count. Going to the top rope proves a mistake as Sasuke is able to rally and dropkick him off the top to the floor. Jumping knee strike as Shiryu scrambling for safety. He's not on the backfoot for very long and he dropkicks Sasuke's knee and follows up with a running dive. He gets two close pinfalls as the fans start to rally behind Sasuke. Sasuke gets the pin out of nowhere after nailing Shiryu with a brainbuster from the top. Average fare really to start things off. **3/4

This is more like it, Dick Togo is gunning for revenge against Liger as he had recently lost the British Commonwealth Junior Heavyweight title to him just a few weeks earlier. As with all good multi person matches we get a series of one vs. one teases that act as introductions. Here we had Togo vs. Liger, Taka vs. Naniwa and finally Funaki vs. Hamada. Heels use lots of triple moves to get the early advantage until poor old Taka gets caught. Taka and Naniwa trade some really awesome stuff, highlighted by Naniwa backdropping Taka halfway across the gym floor.

Back in the ring Jushin Liger is killing poor Funaki until he is sent packing by a sliding dropkick. Heels finally get some joy against Naniwa but they become over confident and allow Naniwa to tag in Liger. Turns out that even the return of Liger is not stopping Kai En Tai dominating, Hamada gets triple teamed and Dick Togo is in full showboating form. We're heading now to the finish and Hamada using a monkey flip and a top rope huracanrana on Togo, we get a great dive sequence by everyone apart from Togo and Gran Naniwa.

Dick Togo with a powerbomb and senton to Liger, but Naniwa makes the save. Taka back in and catches Naniwa with the Michinoku Driver but his springboard dropkick finds no success. Naniwa uses his version of the Michinoku Driver and then a powerbomb onto Taka for the win and to send the fans home happy. Everyone worked really hard and this was lots of fun. ****

Our babyfaces look to be in obvious trouble as they face a 2 vs. 3 battle. A set of early dives including an asai moonsault soon changes that particular tune. Strangely it's Shiryu who finds himself being worked over as his teammates surprisingly stay in the corner waiting for the legitimate tag. After a few minutes, the heels decide it's time for a change of tact and it's on with the blatant cheating. Brawl around the gym area sees Delfin forced to seek shelter under the merchandise table.

Sasuke is not doing any better and gets basically beaten up as his opponents take full advantage of his predicament. Even an handspring press isn't enough to make the hot tag. Fortunately a running rolling dive off the apron onto Dick Togo, allows Super Delfin back in and he soon hits a DDT on Shiryu followed quickly by a tornado DDT. Sasuke hits a great tope can hilo on Teoih and Shiryu. Togo in trouble after being hit by stereo dropkicks. The numbers game though is starting to tell, especially as they resort to ripping Delfin's mask. Sasuke is dragged back to merchandise area and is dropped knee first through a table which puts him out of action.

Now with a 3 vs. 1 advantage things are looking very bleak for Mr Delfin. He gets triple powerbombed and then Dick Togo and friends take it in turns to come off the top rope with various dives. Togo himself gets the win with his diving senton. This wasn't one of the great MPW matches but told a good basic story that our two heroes can't always beat the odds. ***1/4

A rare trip to Mexico here, as this match takes place at CMLL show. Sasuke is defending a title here but even after doing some research I haven't been able to find out which. This match will take place under 2/3 falls rules which is standard in Lucha libre. First fall is a lot of basic mat wrestling, mainly headlocks, armbars etc. Among the rare highlights is top rope suplex by Sasuke before he's goes to secure the first fall with a moonsault.

This match needs to improve, Sasuke continues to dominate and uses a single leg crab to keep on the pressure. Casas needs a change of tact and the wily veteran is crafty enough to do so. He's going to cheat, he indicates that Sasuke's second (Tiger Mask) is interfering. When the referee goes to speak to Tiger Mask, Casa is going to use a low blow on Sasuke. Genius work there, a senton from Casas and we are tied at one fall a piece.

Now with the advantage, Casas turns his attention to Sasuke's left knee. Sasuke makes his comeback with an handspring elbow and an asai moonsault. Casas fearing the worst resorts to yet another low blow and this time he feigns that he was the victim of a low blow himself. A trip to the top rope ends in disaster for him as he gets dropkicked to the floor and Sasuke then catches him with dropkick to the floor as well. Back in the ring Sasuke misses a quebrada and Casas catches him with a roll up to take the title. Thankfully this match did get better helped quite a lot by Casas's change in attitude and the fans really wanting to see a title change.
***1/4

Yes that really is the UK's Danny Collins wrestling here. Team Togo dominate the early going when they catch Otsuka but they can't capitalise on it. We get some nice exchanges between Collins & Hamada and also between Delfin and Funaki. Otsuka catches Shiryu with a giant swing and Funaki gets stretched in one of the few MPW starts that looks a little bit forced.

It's comedy time as Super Astro does battle against all 3 members of Kai En Tai, to the point where Dick Togo as no idea what his happening and gives him an handshake. Astro accepts and then slaps him. The heels try and unmask Astro, this is followed by Delfin's team attempting to unmask Shiryu. Both teams end up being successful as both men swap masks this leads to all kind of confusion. The babyfaces ask Shiryu to attack his partners now he's wearing Astro mask.

Instead after a minute to think about, Shiryu and Astro wrestle on the mat which enables to switch masks again and on with the match. Super Delfin gets hit with a spike piledriver, Astro finally hits a tope can hilo after teasing twice already onto the unfortunate Funaki. Togo gets the win for his team after pinning Otsuka with the powerbomb/diving senton combination. This again was a lot of fun to watch with Collins, Astro and Otsuka adding to the usual MPW style. ***1/2

Both men aren't able to string two moves together, as they told the story that were both able to block or reverse their opponents offence which was pretty cool. Tiger Mask hits the first suicide dive, back in the ring though it is Teoih that gets the advantage with a dropkick to the knee. A figure four attempt is blocked though and it's Tiger that hooks on the submission.

Teoih rips at Tiger's mask and goes so far that he uses a chain that bloodies up Tiger Mask. This actually leads to Tiger's comeback and he goes onto work on Teoih's arm. Teoih hits a chokeslam but a second attempt leads to Tiger putting him into a cross armbreaker. Teoih makes the ropes but his luck as run out as he falls victim to a tiger suplex for the loss. Just an average singles match really. **1/2

If you look at listings for this DVD on the various different sites, this match is actually listed as a 8 man tag, with Shiryu and Gran Hamada not being listed. That is wrong, this match is the legendary 10 man tag from MPW's 3rd anniversary show (10/10/1996). Unlike the other matches on this set I'm not going to review where I talk about the various moves, I really wouldn't be able to do it justice and this match does go more than 30 minutes and this is the full version.

It actually gives a review of the full show, but as the reviewer actually says. This will be the longest ever play by play as it features over 30 minutes of insane action. He's not lying either. Actually I'm a bigger fan of this match then he happens to be, if your a fan of the Dragon Gate style and you loved those ROH showcases then this is definitely a ***** match. Completely brilliant from start to finish.

So there you have it the second chapter in the DVD Retro Project series, next time I'll be looking at one of the most successful tag teams anywhere in the world about 10-15 years ago and chances are you probably haven't even seen them. How's that for a tease??
Posted by WrestleFigsUK at 00:15