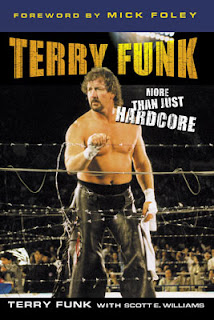 Terry Funk defines hardcore from his work ethic to his later style of wrestling. He has wrestled in six separate decades for more than just a handful of promotions, everywhere from All Japan Pro-Wrestling (AJPW) to Xtreme Pro-wrestling (XPW), and of course the WWE (Formerly World Wrestling Federation). He held the National Wrestling Alliance's (NWA) World Heavyweight Championship for over a year, along with various other titles in the aforementioned promotions as well as Extreme Championship Wrestling (ECW), World Championship Wrestling (WCW), and United States Wrestling Association (USWA) just to name a few. He is a member of all the major Hall of Fames within professional wrestling the Wrestling Newsletter Observer, NWA, WWE, Stampede Wrestling, St. Louis Wrestling, Professional Wrestling, WCW, Hardcore, and finally the George Tragos/Lous Thesz Hall of Fame.

More Than Just Hardcore reads like a story at time more so than an autobiography. Scott E. Williams makes sure from the outset to use Terry Funk's words to paint a picture to fully set the scene for this, in a world when the word legendary is thrown a round an awful lot, truly legendary wrestlers life. Giving a glimpse of what it was like to grow up the son of a professional wrestler and promoter during the 50's travelling around the country before finally settling in Texas. He shares story of both, his father, Dory Funk Sr's outings in the ring but also, his brother, Dory Funk Jr's triumphs in the business. The story is eventually swung around showing how all the memories captured in the opening of the book helped pave the way for Terry breaking away from college football to become a wrestler. Funk shows no shame in admitting a lot of his way was already paved for him due to being the son of an already established name. He would still learn by travelling around the country though before going back home to help prefer for Dory Funk Jr's NWA world heavyweight championship run. The book flows steadily on giving insight to how Terry's run with the same heavyweight title his brother had previously held, explaining why holding the belt was only a short term plan in his mind. Shohei 'Giant' Baba's promotion AJPW is prominent through-out this portion of the tale, Terry goes into detail with what it was like wrestling in Japan along with why he feels himself and Dory Jr really helped Baba stay in the fight with New Japan Pro-wrestling (NJPW) at a sacrifice to himself. Naturally Funk addresses his major feuds such as with Jerry 'The King' Lawler in the Memphis based territory and possibly his most famous feud with Ric Flair from NWA-WCW in the late 1980's culminating with the now famous I Quit match during the Great American Bash. Terry Funk gives his reasoning for many of his retirements some of which he feels were more misunderstandings rather than planned events. Terry could not possibly write an autobiography without talking of ECW, although he does not really go into great detail of his time there he does provide a little insight, during the same portion speaking of the now infamous King of the Death Match tournament during the mid 1990's against Cactus Jack (Mick Foley). Funk starts to wind up discussing his short tenure in WWE during the late 1990's and various independent promotions that he took part in after his final stint in a main stream promotion.

This autobiography is an interesting read full of analytical insights into what makes the wrestling business work from promoting/booking matches, to actually working the match and delivering promo's. A real whose who of stars in the catch-as-catch-can based industry including Abdullah 'The Butcher', 'Stone Cold' Steve Austin, Dick Afflis, The Blackjacks, 'Bruiser' Brody, the Dibiase family, the Hart family, Dusty Rhodes, Fritz Von Erich, Baron Von Rashcke, Sabu, Shane Douglas, and Mitsuharu Misawa just to name a few. It's a though Terry Funk could have composed a book twice as long, but he managed to capture the majority of key moments in his career and complete an entertaining read. A book that any age wrestling fan could enjoy and most probably learn something from.

By Jimmy Wheeler.
Posted by WrestleFigsUK at 13:04