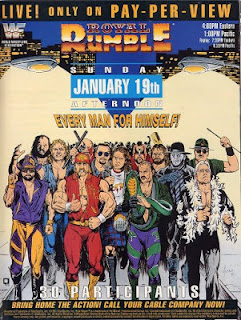 When it comes to January, every wrestling fan and their dog are required to discuss the Royal Rumble. The unique match format comes once a year like Christmas and has injected everyone with their own set of favourite memories which we are compelled to share, just as this article intends to. By no means is this a comprehensive look – I have not seen every 30 man showdown, nor do I intend to, but I am happy to take on your recommendations for outstanding happenings just as I hope you will enjoy mine.

WWE lore credits Pat Patterson as being the brain-parent of the Royal Rumble idea. Patterson, known as the first ever Intercontinental Champion, one of Mr McMahon’s stooges, or a guy you see backstage from time to time (depending on how old you are), is assumed to have been influenced by the Cow Palace Battle Royal, an annual event from the 1970s which he himself won twice. While the Battle Royal match format featured the over the top rope elimination motif, it was Patterson who developed the idea of rolling entrances for competitors as the match progressed, an element which arguably supplies half the fun of the Royal Rumble as it creates a great opportunity for surprise. An important element with the match holds from its predecessor are the idiosyncrasies of eliminations – Over the top rope with both feet touching the floor. It has allowed for many moment of significance playing off the legislation and is sure to offer many more. Since the sixth Rumble in 1993 it has been tradition to grant a title match at Wrestlemania, a tradition stemming from the 1992 Royal Rumble being for the title itself. This added feature gives the Royal Rumble the prestige it holds today, for Rumble winners are commonly destined to be associated with the main event. It is the refinement of this unique match type that makes it a wrestling highlight, one which has endured for over twenty-five years.

So now that we know a little about the match, let me announce that I am entering this year’s Royal Rumble. As we make an approach to the event, you’ll find everyone throwing their name into the Rumble hat. From the Randy Ortons to the JTGs, it’s the generic statement to make on the road to Wrestlemania. The best moments however stem from originality, a pulse of creativity, a moment that makes you perk up and realise you’re watching something different. I dare to say none did it better than The Rock (few rarely do) when it came to Royal Rumble promos. That is why I first offer up The Rock at his best, with his Rumble bid in 2002.

That’s just foreplay though, and ironically enough The Rock didn’t even enter that years Rumble, but his sentiment is a memorable one regardless. True Royal Rumble memories are created on the night of the event however, and a man who carved out many moments of history was The Texas Rattlesnake.

Stone Cold Steve Austin’s name is synonymous with the Royal Rumble making it no coincidence that when it comes to WWE games, winning the Rumble match is usually how you unlock the three one six. In 1997, Austin threw his first Rumble curveball after being eliminated unbeknownst to the referee and then climbing back into the ring to win it, rounding out an outstanding performance from a less injury ridden superstar who was arguable at his best. In the 1999 Royal Rumble, it was nice of 28 other superstars to turn up but it was all about the Austin/McMahon rivalry which was played out in classic Attitude Era fashion and eventually saw Stone Cold go the distance from number one entrant to last person eliminated, courtesy of the chairman of the board. Austin would also make his name as the only three time winner of The Rumble, when he became the last man standing in the 2001 Rumble. It is however the 1998 Rumble that holds my interest more than any other. Austin entered as a past winner and a marked man, and as a wrestler often linked to overcoming the odds when the deck was stacked, he was sure to offer another of his famous moments.

As mentioned, Steve Austin’s greatest moments came from his confrontations with adversity and his ability to overcome when such an action seemed impossible. When ten superstars stop and set their sights on the entrance ramp ready to knock off the Rattlesnake, it’s a joy for any wrestling fan to see Austin get the better off them and emerge triumphant.

When it comes to Rumble performances, there is another man worth honourable mention. Already boasting back to back Rumble victories and a record for the most eliminations through the years, Shawn Michaels is another man known for his participation in the match. It was to be his 2010 entry though that would hold more weight than any other participant in Rumble history. The Heartbreak Kid was set for more than a title shot on the grandest stage of them all, he was set for perhaps the most important opportunity in professional wrestling, a chance to end the Undertaker’s unbeaten Wrestlemania streak. His wish and the audiences craving for a second Shawn Michaels vs. The Undertaker match managed to make the showstopper’s appearance transcend the Royal Rumble, and offer an emotional attachment that Shawn Michael’s is famous for evoking. Evoke he did.

For my tastes, Michaels offers up the most significant Rumble elimination of all time as he carried an entire audiences dream over the top rope with him. By hook and by crook, Shawn would eventually reach his dream match at Wrestlemania but his incredible journey holds an exclamation point thanks to his Royal Rumble performance.

And there you have it, three of my best memories associated with the Royal Rumble. But there’s a plethora of moments left to indulge in. Sheamus and Jericho still managed to bring originality to match in 2012 with their last few minutes before the end. Then there’s cheap popping legend returns scattered throughout history. Classic happenings go all the way back to 1988 when a phenomenally popular Jim Duggan won the first Royal Rumble, and let us not forget that there are many more to come. As we approach the 2013 Rumble, imagine if The Rock lost his title match then entered and won the Rumble to get his second chance. Imagine if a title holder entered the Rumble and set his sights on unifying the titles. Imagine if the Rumble were not for a shot at the title, but at The Undertaker’s streak. Just a few ideas and who knows what else could develop in the WWE’s mind. All we now is that they have a fine match in which to execute their plans.

My tastes linger around 90s Attitude and late 00s PG, but I’m now set to watch the 1992 Royal Rumble on what seems like unanimous recommendation. After indulging in my Rumble moments, I ask you to further educate me and share those moments you favour from the 30 man battle. Share in the comments or get it straight to me @DerrieCatton on Twitter. I look forward to hearing about what memories have stuck with you. Now as I take my leave, let me close on another Royal Rumble favourite and something that is a credit to Jerry Lawler. Remember, it takes a King…