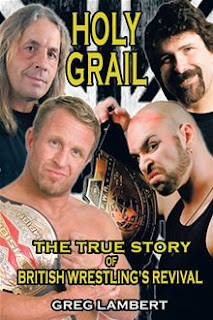 Greg Lambert has been a fan of wrestling his whole life and active within the industry for just over a decade. He has worked as a heelistic manager for arguably at one time Britain’s number one promotion, Frontier Wrestling Alliance, along with being a party to a booking team for the same promotion, eventual part owner and booker. He has ran his own company X Wrestling Alliance, been a regular host on the WrestleTalk Radio show. Further to that, Greg Lambert has also been a long stay writer for Europe's most popular professional wrestling magazine Power Slam and for a local newspaper based in Morecombe.

What you have here is a rollercoaster ride of a two people's passion to reinvigorate a fledgling independent UK wrestling scene. It is biographical in places of the storyteller, Greg Lambert, starting off with how he found himself involved and interested into the aforementioned industry whilst listening to Talk Sports, WrestleTalk. You then follow him through a journey starting with a young hopeful promoter, getting exposure on the WrestleTalk show itself along with meeting someone who would go on to be a favourite wrestler, long term friend, business associate and the other person this book is centered around, Alex Shane. From here you pretty much go step by step through the tumultuous promotion that was Frontier Wrestling Alliance (FWA), not that the layout of this written piece is that rigid, rather, Lambert reminisces on past events that effected his life, he delves into the histories and futures of wrestlers as they become relevant to the story. Greg captures what he and many others felt was the magic of the FWA in an enchanting manner with Holy Grail, painting a picture of not only what it took behind-the-scenes to make the shows a reality but also what transpired during the shows themselves. He truly gives clear insight to some of the colourful personalities in the United Kingdom along with overseas wrestlers that frequently travelled to further enhance the scene, the words provided by Lambert then get heightened by portions of interviews he has conducted with a plethora of talent over the years. If like myself you don't know much about the history of British wrestling since the 1990's, you will be surprised to find a plethora of names such as Mick Foley, Bret Hart, Low Ki, AJ Styles, Christopher Daniels, Daniel Bryan, Samoa Joe, Sheamus, Drew McIntyre, Doug Williams, Wade Barrett, Jake Roberts, Takeshi Morishima, Kenta Kobashi, and Mitsuharu Misawa just to name some of the names that appear in this book. Then of course you have an unbelievable list of talent from across England, Scotland, Wales, and Ireland to name just a few, Stixx, Marty Scurll, Rockstar Spud, Jack Storm, Johnny Storm, Jody Fleisch, Martin Stone, Zack Sabre Jr., El Ligero, Bubblegum, Darren Burridge, and Dave Mastiff. Compact with all these top names from both sides of the Atlantic this tale of passion flows nicely, not becoming just a boring fest of dates, politics and general disappointment. Instead we get various different views at what happened, the scene itself, and the wrestlers involved during the FWA years that continue all the way up until the eventual demise.

There is only one flaw with the True Story of British Wrestling's Revival, it is wrongly named. Do not expect an in depth look at all the different promotions that have sprouted up in the last few years or the few promotions that existed before the turn of the century. Holy Grail instead is the wonderful inside story of one of, if not the most influential wrestling promotions in the United Kingdom since World of Sport was taken off of the air. By the end of the book you will not be disappointed that it focuses mainly on the FWA, Greg Lambert, and Alex Shane. Lambert as you would expect being a journalist by trade manages to put the book together in a great way, with his 'gimmick' shining through at times but also offering a rare candidness into his own mind set and emotions that he travelled through along the path that was the FWA's attempt at British Wrestling's Revival. I would recommend this to anyone who is interested in the UK wrestling scene and also to anyone who enjoys wrestling books, this was a good interesting read.