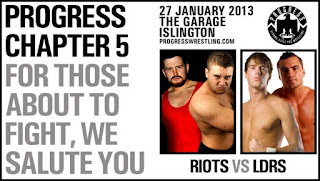 The first PROGRESS wrestling show of 2013 takes place next Sunday once back at The Garage in Islington after Chapter 4 was in Tuffnell Park.

On the card we have the core roster back and a couple of debuts so let’s get on with the preview.

Making his PROGRESS debut will be Jonathan Windsor going against ‘Wild Boar’ Mike Hitchman. Now, I have to admit off the bat, I have not seen Windsor wrestle live only via YouTube but he seems very capable and to be honest against Hitchman, he’ll need to be. ‘Wild Boar’ is no stranger to PROGRESS as he wrestled back at Chapter 2 against Mark Andrews and he is an excellent worker in the mould of former ECW champion Rhyno. I hope Hitchman doesn’t take that comparison as a knock because I really rate him as a worker. After the little bit of stuff I’ve seen of Windsor and all the stuff I’ve seen of Hitchman I expect this to be a good match.

Making another appearance at PROGRESS will be the ‘Heavyweight House of Pain’ STIXX he’ll be facing off against a big favourite of the PROGRESS crowd and that is Danny Garnell. Danny missed Chapter 4 dues to suffering a broken leg at the hands of The London Riots during a match where he teamed with ‘Dazzling’ Darrell Allen against The Riots at Chapter 3. Both these guys are big but this won’t be a ‘big man’ match because both are very capable wrestlers and as I said, Danny is well-liked by the PROGRESS crowd and STIXX, well, he’s not liked much at all so this will play a big part in the whole atmosphere of the match.

RJ Singh has issued an open challenge for anyone to face him at Chapter 5, he has promised that there will be no interference from his entourage. Singh has wrestled at 3 previous PROGRESS shows, losing once and winning twice. I really have no idea who it is that will face Singh so like all the other fans in attendance I look forward to see who accepts his challenge.

Now we are at the top end of the card, former champion the ‘Showstealer’ Nathan Cruz will face another wrestler making his PROGRESS debut – Rampage Brown. I have seen Brown on DVD a few times but never live so this will be a first for me. During his interview with The Indy Corner podcast, Cruz did speak of Brown and I think he does respect him but respect goes out the window in this one because Cruz not only wants to steal the show, he wants to get back on the winning trail so he can try and secure a rematch for the PROGRESS championship that he won back at CHAPTER 1 and lost at CHAPTER 4 to El Ligero. Now although Cruz hasn’t got his rematch at Chapter 5, PROGRESS owners Jim Smallman & Jon Briley have allowed him to pick the opponent for Ligero at Chapter 5 which I’ll come to in a moment.

The match I think I’m looking forward to the most is this next one; the so far undefeated London Riots will face one of the UK’s premier tag teams – The Leaders (Marty Scurll & Zack Sabre Jr.) These two have been a team for some years now and have wrestled together all over Europe against some great teams and at Chapter 1 in the Championship tournament; they faced each other in what was easily one of the best matches to take place in the UK in 2012. However, as good as The Leaders are, The London Riots are on a roll in PROGRESS and are so far undefeated after beating The Velocity Vipers (breaking Alex Esmail’s leg), The Bastard Squad of Danny Garnell & Darrell Allen (breaking Garnell’s leg) and at Chapter 4 they beat another top team from the UK, The Hunter Brothers. This I think will be the toughest test for The Riots and I really couldn’t pick a winner but as I said earlier, it’s the match I’m most looking forward to.

The final match of the night will be PROGRESS champion El Ligero squaring off against the man chosen by Nathan Cruz....’The Bastard’ Dave Mastiff. Now the two are no strangers to each other and I’m expecting this to be a good one. Anyone who has seen these two before will know, style wise they are polar opposites which I hope makes for a unique type of match. For a first defence of his championship, this is going to be really tough for Ligero but one I’m sure he’ll face head on next Sunday at Chapter 5.

I think there might be a minimal amount of standing tickets left for the show so head over to http://progresswrestling.com to see if you can get hold of one because if you have never been to a PROGRESS show before you’ll really enjoy this one.