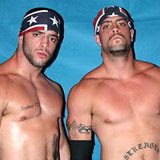 A year ago TNA had one of the best tag divisions in recent history, even rivaling ROH and CHIKARA Pros. Yet here we are a year later and it is a pile of shit. As I am a wrestling fan who happens to mark like a motherfucker for tag division, I am here to bring a spice of life to what once was a decent part of TNA. Now I am going to split this into two parts the first is Assemble and the second is Acquire. Now you all are smart people so I don’t have to explain what I mean by assemble and acquire so let’s get to it

Assemble
There is a vast majority of TNA guys not getting TV time (or maybe they are on Xplosion but I haven’t watched Xplosion in years so bear with me) so maybe you should pair a few together and see what happens.

Team 1- Doug Williams & Mark Haskins
Age and experience meets youth. Two brits that have the same mat style but one has a slight hi-flying style and the other is more classic Brit Style. I’m sure a new version of the British Invasion would be interesting to see for all to see as it has something for the Brits to see and Mark Haskins is a great antagonist.

Team 2- Magnus & Crimson
I’m not a fan of Crimson and I love Magnus, but I think Magnus could bring out a personality in this the shitty second coming of Goldberg. And these two aren’t small fellas even though they aren’t mastodons, so I think these two could be a great fit in this division.

Team 3- Jesse Sorenson and Tony Nese
Two bland X-Division guys. As they are X division they should bring a nice pit of adrenaline into the tag division which sets up a great match between MCMG when Sabin heals up.

Team 4- Austin Aries and Zema Ion
Two great X-Division heels. This is hopefully for the temporary as the aim of this is to get Ion over to the point that he could take Aries place at the top of the X-Division tree, if Aries ever got hurt. I hope Aries never gets hurt though. OK that’s enough assembling for now. Let’s move on

Acquire
Now getting two people and pairing them up is a good idea for a while, but getting some guys from the independent scene that have made waves in the tag division and force them into TNA…

Team 1- The Briscoes
You know who these guys are. They have been teaming for almost 15 years, they can wrestle any style. The only bad thing is that they may need a mouth piece as they won’t let Jay cut his awesome swear filled promos.

Team 2- Future Shock
Another X-Division team. They pick up where the Young Bucks left off. Also these two can break off into singles in anytime and can easily become X-Division champion. Also Adam Cole looks like he could be a fantastic heel

Team 3- Incoherence
Do I need to say more? They have a PG gimmick and they make for some entertainment. Hallowicked can branch out and grab a TV title and Frightmare can bring home an X-Divison championship. Maybe having these guys accompany Eric Young can make for some comedic moments

Well that’s a few of my ideas, think you have a few, then tweet me @AH_Walker and we will have a chat/debate about it.

Thanks for reading, take care….
Posted by WrestleFigsUK at 12:46