WOW, what weekend in Indy wrestling both in the US & UK.
In order of events, on Friday Oct 21st Dragon Gate began their 2011 tour of the UK in Broxbourne. The show by all accounts was amazing topped off by a great main event of SHINGO over PAC.

Night 2 was in Nottingham and I was in attendance myself. Before the show there was an official press conference for which I was also in attendance for. I must admit, I was a bit unprepared as I was caught off guard when I got there. Questions aimed towards the Japanese workers were put across via a translator and I know for one, what I asked seemed lost in translation. The only real notable thing from the press conference was the announcement of CIMA's mystery partner and this was his former partner GAMMA, the two are now in different factions in Dragon Gate in Japan. The current program in DGUK was that if anyone was to have 5 losses they would be removed from the DGUK roster and leading up to night 2 CIMA was 0-4 so had to win on Night 2.

As I thought it would be, the show was amazing. The show was based around the third meeting on UK soil of SHINGO vs. Yokosuka. The show had a slow build but got exciting really at the semi-main event time where we had the UK's own PAC, the current Open The Brave Gate champion defeat Dragon Kid who's name and mask is in tribute to his trainer & mentor Ultimo Dragon. The match to no surprise was great and where I was sitting in the arena right in front of me I had the parents of PAC sitting right in front of me. I did have a chat with them and his mom was constantly covering her eyes every time there was a spot against him but overall they were really proud of their boy and so they should be. 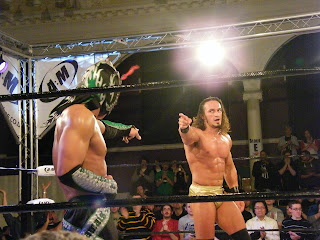 The main event was well, AMAZING to say the least. The other 2 matches in the series were crackers and this one probably just shades it for me as I was in attendance. These guys gave everything and I wasn't disappointed at all. Great showing by all involved. Full credit to Mark Sloan and his team from A-Merchandise.

Elsewhere on this site there is a more detailed review of night 2 by my chief writer Shaun Nichols who was in the second row for the show.

On the same night as the first DG show, the awesome FightClub:Pro had another show at The Planet in Wolverhampton which I was unable to attend which I was annoyed about as it featured the top prospect in my opinion on the British scene MK McKinnan against El Generico, more on him in a bit. FCP champion Trent Seven beat Clint Margera, in a ladder match, I like both guys as workers and as people so gutted I missed this one too, fingers crossed, these matches will make it to DVD speaking of which, FCP now have on sale on their site all 3 nights of the Project Mayhem shows, as you may recall, I attended nights 2 & 3 so to see night 1 on DVD will be great. CZW are selling nights 2 & 3 as they were not involved in the first night but I urge all listeners to buy from FCP direct not only because you get all 3 nights but buy buying off FCP the money is going back into the company which will help them grow and put on more great shows. The next of which is Infinity on 25/11 again at The Planet in Wolverhampton, no details yet for matches but follow me on twitter @WLHSTU and when I know, I'll post it there.

Now back to El Generico, after he faced MK for FCP he jetted off back to the US as he was booked to face PWG champion, one of my personal faves in the business at the moment, Kevin Steen in a ladder match and yes, the ever so popular 'generic luchadore' won the PWG title for the first time, congrats to him great achievement. After the match, the Young Bucks came out to attack Steen and he was saved by none other than SUPER DRAGON, Dragon hadn’t wrestled in PWG since May of 2008 but has remained behind the scenes with the promotion. Dragon & Steen will face the Young Bucks on December 10th.

Nigel McGuinness is making a return to in-ring action, he’ll be wrestling first for Squared Circle Wresting (2CW) in New York on 11/11, the following night he’ll be back to where it all began for him in the US at the Heartland Wrestling Association and he will also embark over to his homeland of England and one of the companies he’ll be working for is Steven Fludder’s Preston City Wrestling on 03/12 so go to http://facebook.com/PrestonCityWrestling for more info
Posted by WrestleFigsUK at 10:48