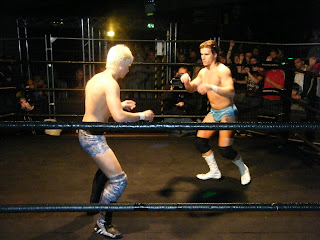 Nearly every week I record a segment on the Total Wrestling Show (link on right of page) called The Indy Corner, I do a brief outline of what I am going to talk about and this is below, it gets covered to an extent but never in full so here it is for your reading pleasure.

As you will know, I was at Fight Club: Pro 'Project Mayhem' last week so I didn't record The Indy Corner but I just want to say, the two shows I went to out the three were friggin' amazing! You heard my call last week I hope where I said I had seen one of the best matches of the year in my opinion and to see it live was great, that was of course Adam Cole who was representing CZW but is also part of the ROH team Future Shock with Kyle O’Riley and he was facing UK worker MK McKinnan (match pictured above & below). MK went over to the US earlier in September to work for CZW and CHIKARA and at the show, someone I was standing with said he’s not sure if MK is a bit over-rated because he wasn’t that good in his CHIKARA match but after that match last weekend he has changed his opinion. I told MK himself, I hope there are big things for him in the future as he is an outstanding talent.

Now, when I called into the show last week someone said in the chat room that CZW was ‘trash wrestling’ and I know Steve defended CZW in every way he could but I just want to have my two pence worth. CZW, for years has been based around a lot of the death match style of wrestling, they started in 1999 I believe and I got into them in 2001 and was a big fan for a number of years. They had the death match stuff back then too but also had some good wrestling so it was a mixture of the two styles. CZW is where the Briscoes of ROH fame cut their teeth so to speak in the business. As Steve pointed out, CZW is now under the ownership of DJ Hyde who was at the FCP shows I was at and he hasn’t left the death match stuff behind but he does want to have good actual wrestling on his shows and with the likes of Cole, Jonathan Gresham, Philly Most Wanted & more he has some good workers on his books. In closing, don’t dismiss CZW because of the death match stuff they do, they have some great wrestlers and deserve a chance. 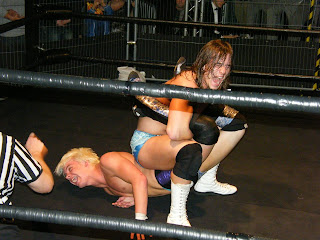 One final note on Fight Club: Pro – October 21st has a show with El Generico booked and he is also booked for PWG in a ladder match for Kevin Steen’s PWG title, El Generico himself confirmed to me via twitter he is working both shows so we’ll have to see what occurs.

So my final topic this week is about a proposed show booked for the UK on Jan 1st 2012, yes, that's right, NEW YEARS DAY by a company called New Scene Wrestling. The show is scheduled to take place right here in my own city of Birmingham but January 1st is a bit much. For me to go to a show even that local on new years day it would have to be special so who has this little known company booked? Well none other than current ROH world champion Davey Richards! After missing out on seeing Davey last time when he was over here for Fight Club: Pro as I had to leave the show early I really should be attending this show and then I find out who his opponent is and it's none other than the man he took the title off, fellow American Wolf Eddie Edwards, I will talk more about that shortly. I'm not sure who else if anyone else with a name is coming in for the show but be sure enough, when I know, you'll know. Now back to Davey vs Eddie, I read a comment which I thought was great and that was do we really need to see those two face off against each other because we've had that match on the last but one ROH iPPV ( which if you haven't seen yet you NEED to) and on the old ROH TV show when it was on HDNet. As said by that person and someone who was at the FCP show on Sunday last week, these 2 big named Indy guys should be facing British guys to give them the rub, Davey did this when he was over last time, he wrestled 3 different guys from the British scene. I'd be interested to see what other people's thoughts on this are.

This weeks Indy Corner was the last in the pre-show on a Sunday because as of Wednesday October 12th The Indy Corner will have it's own show LIVE at 20:30 GMT over at http://totalwrestlingshow.com as myself and Steve Grieve will be bringing you all the indy news you need - The pre-show for that will start at 20:00. Please come and join us and you can interact with us and other fans of independent wrestling in the chat room
Posted by WrestleFigsUK at 20:08