The Undertaker vs. Triple H @ WM - Where does it Rank? 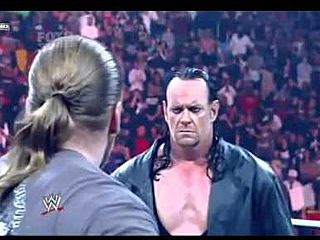 I like most thought Wrestle Mania XXVII was a dire show saved by one match, that being Undertaker vs.Triple H. Over the years, Undertaker has had some terrible matches while getting his unbeaten streak to 19 and at WM XXV where he faced Shawn Michaels for the first time at a WM he wrestled quite easily his best of all his WM matches. One year later, he face Michaels agin this time with Michaels' career on the line against the streak and once again, wrestled a great match although probably not as good as the one a year previous. Now, this past Sunday at WM XXVII in Atlanta, Undertaker face Triple H with no real major build up, Undertaker Triple H made their returns to the WWE after some time off on 2.21.11 and as WWE weren't able to secure the services of Sting, they went with the marquee name of Triple H to face The Undertaker instead.

Despite there not being that much build up, I really enjoyed the match between Undertaker & Triple H and recently while listening to the Still Real To Us show I heard one of the hosts say it was a better match that either of the matches with Shawn Michaels. At first I wasn't sure, I mean I have only watched the match once myself and that was live, and I thought this match on first viewing was amazing but the question is - Where Does it Rank in the list of Undertaker's WM matches and is it REALLY better than either of even both of the Undertaker matches with Michaels?

I'll probabably have to agree with Eric from SRTU and say this was better than the WM XXV match which was amazing.

I am sure this article may garner some response do feel free to comment or email me @ wlhstu@aol.co.uk

Follow me on twitter @WLH_Stu
Download the EXCELLENT SRTU at iTunes searching for Still Real To Us or over at http://wrestlechat.net THE place to get all your wrestling news and breaking stories.