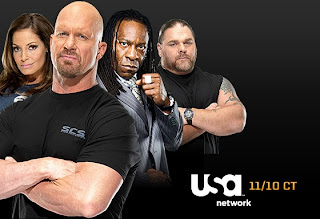 This past week WWE debuted the brand new season of Tough Enough. Here are my opinions on the opening episode.

Some of the contestants are clearly only on the show attention seeking; this kind of lets the show down a little as you already know who is likely to be in the final.

I know this will come across as sexist but all the females on the show don’t deserve a spot, especially Miss USA, who in my opinion should have been first to go. They all don’t seem to be taking the show seriously enough & clearly don’t follow wrestling all that well.

WWE Need to leave the swearing un-muted, the show shouldn’t be aimed at young children especially at the time it aired. (11PM Est) The last 5 minutes of the show featured “Stone Cold “swearing repeatedly on every other word he said. The production teams bleeping out wasn’t very well executed & the bleep continued on to the following word, making it awkward for the viewer hear what other comments Austin had about the contestants.

The house the contestants get to stay in looks amazing, & very well kitted out to suit the needs of the guys & girls.

Miss USA used padding, (As she was in pain) but “Stone Cold” asked her to remove it once the drill was over seemed very stupid to me. If he knew it was there, get her to remove it during the drill, not once she was finished, or at the very least repeat the drill.

WWE have not made the contestants individually stand out from each other, so that I can remember their names without going back on the show for reference. A good reality show opener should have the majority of the contestants names lodged in my head.

It’s good to see in the coming weeks guest stars such as Rey Mysterio, John Cena, & The Rock, this really gives me the impression that WWE are really behind the show.

Good to see arguments have already started in the house & we are only a week in!

I don’t believe this show will be on any longer than 2-3 seasons, I have already seen that it’s getting mixed opinions on the internet, but I believe people will become bored off it eventually, unless they drastically mix up the challenges/hosts & trainers each & every season.

Overall not a bad opening episode to Tough Enough a few little things could be tweaked to make it that slight bit better, however the show came across to me as stronger rather than weaker!

By Sean Walford
Please Leave Your Thoughts, Comments, & Opinions Below Thanks!
Posted by WrestleFigsUK at 10:43