God, The Devil and Vince Russo By Craig Jarrett 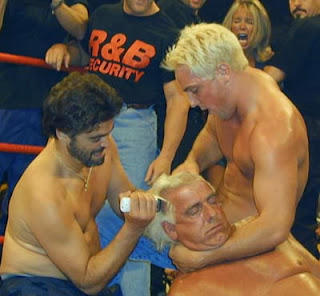 Vince Russo is a man who has never been short on controversy with his views on what professional wrestling is and his writing as seen on TV.

It never fails to amaze me how many people blame Vince Russo for anything they didn't like during his time there but those same people never seem to give him credit where credit is due for all the great moments he helped create. If you look at WWF/E before and after Russo was on the creative staff you can clearly see a difference by what was been seen on TV and that he helped put everything into place for the year that was 2000, the best year to be a WWF fan.

One of the biggest stories on the wrestling internet (which I was not apart of back then) in late 1999 was the creative jump of Vince Russo (and Ed Ferrera, buts nobody remembers him) from Vince McMahons WWF to their Monday night ratings competitors in Ted Turners WCW. This was what WCW needed at the time as they were struggling to respond to WWF taking back the title of the number 1 wrestling promotion, from the very first show that Russo was apart of for WCW you can clearly see a change from what WCW had been doing in the stale year that was 1999.

In late 1999 the ratings in WCW began to rise once again and we began to see an edgier look to the product as a whole which culminated in the New World Order being brought back from the dead this time being led by then WCW champion Bret Hart who had not had the best of times in WCW since making the famous jump two years earlier. This new version of the infamous nWo would featuring Bret Hart as the leader instead of Hulk Hogan back in the original nWo who had of course been lingering in mid card ever since joining WCW, the band was also joined by Jeff Jarrett this time who had of course previously been apart of WCW years earlier but left for better things. If you go back and look at the difference in quality and entertainment factor in WCW from before Russo came in to after you will see that WCW became a much better product, this would all change in January of 2000 when Vince Russo was forced out of WCW by the old guys scared of their spots being taken. This dismissal of Russo from WCW also led to the walk out of Dean Malenko, Eddie Guerrero, Chris Benoit, Perry Saturn and Shane Douglas (who would return a few months later) which was such a huge blow for the promotion as The Radicalz (Malenko, Guerrero, Benoit & Saturn) went on to lots of succes over in rivals WWF.

In April of 2000 Vince Russo was brought back in as WCW had gone back to what is was before Russo was initially brought in, stale and boring. This time he was not alone as Eric Bischoff, the man behind WCWs most successful period was also brought in to work along side him. The product of WCW would once again be changed as WCW was to take a new direction in talent as the focus of the promotion would be on younger wrestlers, most of whom would come from WCWs own training facility the Power Plant. These wrestlers that would be brought in to be the future of the promotion were the likes of Shane Helms, Shannon Moore, Chuck Palumbo, Sean O'Haire, Mark Jindrak, Elix Skipper, Johnny The Bull and many more. During this new direction in the WCW product we saw the old wrestlers being moved aside to make way for the future and wrestlers who had been apart of WCW for years but had never been given a shot such Scott Steiner, Booker T, Ernest Miller and Chris Kanyon being given bigger pushes, we also saw ECW wrestlers such as Mike Awesome and Lance Storm being given a decent push.

Despite all the progress in pushing the future of the promotion there was problems from those veterans whose spots were being taken which lead to Bash At The Beach 2000, a creative control card being played by Hulk Hogan and Vince Russo refusing to bow down to his wishes. Russo went out on a live PPV with a live microphone to give the biggest pipebomb in wrestling history and tell the world what we all already knew about Hulk Hogan but nobody ever dared to admit, this incident then went on to allow Booker T to go and finally get the main event push so I guess every cloud would have a silver lining.

All in all I would that Vince Russo is a hugely talented creative writer and I do not think he gets anywhere near the amount of credit that he deserves for the key part he played in the greatest period to be a professional wrestling fan. I will not be commenting on his time in TNA as I really am not a fan of the product and I haven't watched enough of it to really judge.

If you would like to read a what if scenario regarding Vince Russo making former UFC star Tank Abbott the WCW world heavyweight champion then please go to www.callingspots.com to check out the latest issue of this great fanzine.

P.S. I liked the decision to put the world heavyweight title on David Arquette lol.
Posted by WrestleFigsUK at 10:05