The Most Ridiculous Promo Ever By Shaun Nichols 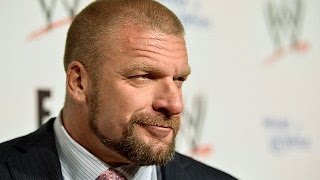 I did think that maybe one of the other contributors to the site may have wanted to discuss Triple H's promo in the main event angle of the go home show for the Hell In A Cell PPV, but as no-one has done so I'd like to give my thoughts on it.

As you can tell from the title of this blog, I like many other wrestling fans thought it was one of the most ill-judged interviews ever put on TV with seemingly the only idea being that Triple H wanted to bury as many stars from both the present and the past as he could. Remember that this was the last Raw before the PPV so this was the last thing that many WWE fans would see and in many cases would determine if they would pay the $54.95 to order the HIAC show.

In the previous episodes of Raw they had worked to convince fans that after the disasters of Night of Champions and Battleground events that here they would deliver a new WWE champion. The key then you would think is to go and get the WWE Universe excited about the conclusion of the Randy Orton vs. Daniel Bryan feud. But like many times when The Game is on hand with a microphone it became obvious that he's only interested in putting himself over.

The interview had two main points, firstly he buried the accomplishments of Chris Jericho, Rob Van Dam and Edge all of which are currently not working for the WWE. There was no reason at all to mention any of the them, Edge has retired and apart from making the occasional appearance will not be a part of the WWE. He is though a WWE Hall of Famer, won the WWE/World titles ten times and was for a long period of time the mainstay of Smackdown and the leading heel in the company in the 2000's.

He was a major star in the WWE for a very long period of time, won as major titles in the WWE as anyone else and was celebrated with two very good WWE DVD sets. He also left on his own terms when he realised he was risking major health issues if he didn't retire which may not have gone down well with Triple H.

The mention of Chris Jericho is probably stranger as it was only a few weeks earlier on Raw in a segment which saw Triple H and Edge argue back and forth. During that, Hunter had confessed that he although he usually assessed talent well he had been wrong about Jericho and that Y2J was a major star although at the same time he again buried Edge by saying he didn't draw a dime. Why do companies keep thinking the fans care about who drew money anyway?

Here though Jericho although popular with the fans, wasn't a big star and didn't do well for business. This led Jericho sending out a couple of tweets after Raw had gone off the air. The gist of the them was that he felt that Triple H despite his many pushes didn't do much either, and that he had other things that he could do in his life. Finishing by saying goodbye to the WWE and that wrestling wasn't as important as many people involved with it believes it is.

Now Chris Jericho does like to keep people guessing about what his future plans are so he could easily be trying to use Triple H's words as a distraction but actually it could be used as the basis of a future programme. With that being said the WWE aren't that keen to have Jericho in major programmes as he is only round for short periods and then goes off to work on other projects. So the idea of a Triple H vs. Chris Jericho feud in the early part of 2014 is probably unlikely.

Assuming that Jericho's responses are genuine and him being buried in that interview was something he wasn't aware of beforehand then it seems a particularly stupid move to annoy a supremely gifted performer who'll come back and do whatever you want him to do without any issues.

The final attack was on RVD, this is someone that I just think Triple H felt he could name to get an easy reaction. RVD is very popular with the fans but wasn't someone who had the same long term impact on the product as Edge and Jericho. Van Dam for his part didn't react at all and probably wasn't all that surprised, when he left the company the announcers played it up that RVD would return at some point and that was likely to be a matter of months rather than years.

The second part of his promo was yet another attempt to get fans to believe that Daniel Bryan wasn't worth paying to see. Quite the masterstroke as this would be the fourth PPV in a row that he would be in the main event.

Triple H stated that he was a real star and he would not waste his time wrestling someone like Daniel Bryan. He also said that he only wrestled other real stars and specifically mentioned The Undertaker, Brock Lesnar and The Rock. You'll notice that both Randy Orton and John Cena by that definition are not real stars.

The Undertaker is under a contract but wrestles basically at Wrestlemania and maybe one more time in a year depending if he feels up to it.

Brock Lesnar is again under contract but is only available on a very limited number of dates and hasn't been seen since SummerSlam and doesn't seem likely to appear on WWE television before 2014.

The Rock isn't even under a WWE contract and although he loves wrestling and will probably wrestle again at some point, he is an actor and the studio bosses weren't exactly thrilled with the injuries he picked up wrestling so they wouldn't really want him to wrestle in the future.

So out of the four real stars that Triple H mentioned, the only one that appears on WWE programming on a regular basis is himself. Now that really is a surprise. The current stars that are carrying the company like Cena, Orton, Bryan and CM Punk are merely secondary stars and are inferior to what came before them.

What's pretty funny is that if you really think about it John Cena is easily a bigger star than Triple H was over the last 20 years, and he only trails behind The Rock and Steve Austin as to what he actually means to the company.

What's also clear is despite of everything that the trailers for Hell In A Cell PPV tell you, the major feud that dominates Raw is Triple H vs. Big Show a match that will occur at some point but we don't know when.
Posted by WrestleFigsUK at 11:43