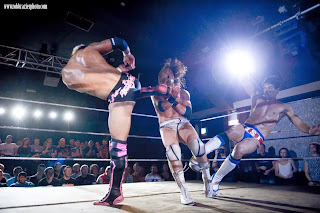 (Above: After Mark Haskins tells both Ricochet & Zack Sabre Jr to stop hitting him they both level him together - Picture credit to Rob Brazier Jr.)

Before I start I must confess that I've never been to or watched a complete Progress show before despite seeing a few bits and pieces and hearing nothing but very positive things about them, so when I got asked to watch and review this I jumped at the chance especially with a mix of guys on the card that I really like and some I've not had chance to see much. So is everyone right or was I disappointed? We shall see ... This. Is. Progress!

The DVD starts with clips from the video promo war between Stixx and Nathan Cruz, giving background to the feud between Stixx and the Screw Indy wrestling group following Stixx defeating Mark Haskins at a previous show. The promo's are intense and really hype the battle for later in the show.

The show starts with promoter Jim Smallman in the ring. I first saw Smallman doing stand up supporting Mick Foley on his first UK comedy tour so I already know he's a genuine wrestling fan as well as a funny comic.

As part of his intro he lays out the show to come and hypes the next show and announces some changes to the card due to some injuries, most notably Jimmy Havoc who is still in attendance but unable to compete

End is in as a replacement for Jimmy Havoc and kicks off the match challenging Mastiffs power, Mastiff soon takes charge with his size until End slows him down with some big kicks. Mastiff comes back with a cross body and starts to wear down End, holding him up in a suplex while the crowd counted to 30, but only managed a 2 count. End gets himself back in it with a spring board moonsault then a double knee press into a huge kick, both only getting 2's. He then hits a double foot stomp off the top rope but Mastiff rolls outside before he can capitalise. Mastiff hits a massive lariat and a German suplex for 2, then hits another German into the turnbuckles to set up his cannonball but End stops him with a viscous kick followed by another top rope foot stomp 1-2-3

Good, hard hitting match to get the show going, a lot of respect from the crowd for both guys

This match is a semi-final in the Natural Progression series, the winner will face "White Lightening" Mark Andrews in the final at the next show.

Dennis is literally about twice the size of Robinson and exerts his dominance early on, Robinson however is ridiculously fast and uses this to his advantage. This is a great contrast in styles and allows both men to excel. I'm a big fan of Eddie Dennis and it was great watching him against a small opponent and seeing him show off his pure wrestling ability and style. Some nice spots in the match including a massive "Razors Edge" power bomb which only got a 2 count. At one point Robinson rolled himself up in a ball like a hedgehog to defend himself, Dennis was kicking him round the ring and he just rolled with it, eventually he just picked him up and threw him! Eventually Robinson was able to hit a shooting star press and pick up the 3 for what I have to say is an upset victory.

Until now I'd not seen a complete Ricochet match, only highlights packages and he always looked entertaining as hell and a phenomenal athlete and great gymnast ... So my immediate thought was how will that fit in with the Progress Strong style, especially up against 2 men who are arguably amongst the best in the country. I was not disappointed! I watched this match twice and still found myself stopping and rewinding it to watch spots again! This is an advantage of watching on DVD, can only imagine watching it live you could blink and miss some magic. The multiple cameras manage to catch all the action and give you a genuine, up close ringside view.

At the start of the match as Smallman is banned from introducing any member of the Screw Indy Wrestling group Haskins tries to do his own intro but the boo's from the 350 person sell out crowd are deafening! Ricochet on the other hand is greeted with chants of "O'Shea O'Shea"

Ricochet and Sabre dispense with Haskins from the off send have an amazing, rapid exchange until Haskins trips Ricochet and takes control, working over Sabre before locking both him and Ricochet in a double submission. Ricochet breaks the hold before hitting a standing shooting star press on Sabre.

Ricochet then gets Haskins locked in an innovative submission hold before he escaped and starts to take control again temporarily. All guys get some offence in including some great moves involving all 3 men simultaneously culminating in a triangle punch off! Sabre and Ricochet end up taking turns hitting Haskins with uppercuts before hitting a sweep kick combo.

Sabre and Ricochet go at it, hard hitting and high speed. Ricochet attempts a hand spring off the ropes but Sabre stops him by booting him in the head mid move. The match continues to go back and forth between all 3 men, each utilising amazing innovative and painful looking moves. Haskins has the match won but Sabre breaks up his pin attempt with a running kick that very nearly takes his head off his shoulders before pinning him for the 3.

The entire crowd are on their feet applauding, Jim Smallman enters the ring to send the show to interval and he sums up the match perfectly and simply .... "F@&king hell!!"

The second half of the show opens with Smallman in the ring to draw the winner from the charity raffle. Jimmy Havoc is invited to the ring to pick the winner, discuss his injury and get a great ovation from the crowd.

First match of the second half is a very personal grudge match, Stixx goes right after Cruz before the match is officially under way. Cruz gets on the mic and runs down Stixx criticising him for DEFENDing Indy Wrestling and not being a pro like him, before hitting him with a low blow before the bell rings.

Cruz is all over Stixx and the fight heads outside the ting and deep into the crowd, prompting chants of "We can't see shit!" The two eventually make it back to the ring to chants of "Welcome back" and Stixx goes head first into the ring post and gets bust open.

Cruz is firmly in control but can't keep Stixx down, Stixx manages to mount some offence, a huge spear, spine buster and a cross body in the corner and he begins to take charge. At one point Cruz gets knocked off the apron into the wall at the side of the ring. Stixx hits a black hole slam but only gets 2. The finish comes when Stixx locks Cruz in a brutal submission, he also holds his arm so he can't tap out forcing him to say I quit.

Danny Garnell was due to be the Bhangra Knights partner for this 6 -man but was out injured with a slipped disc, the replacement was kept a mystery until the start of the match, then out comes Grado to a huge ovation.

Similarly to the triple threat match I have watched this match twice but I've genuinely got no idea how to explain what happens, it was absolutely hilarious from the off. Kris Travis and Martin Kirby are one of the best tag teams around and also one of the most entertaining, the Bhangra Knights are not far behind then there is Grado who is, well he's Grado! Add into this making his Progress debut (and somebody I am a big fan of) T-Bone who played the straight man perfectly eventually telling his partners to "Stop f&@king about" and kicking them out of the ring ... Only for them to invade the lighting booth and mess around there for a few minutes! After a lot of comedy, interspersed with some wrestling, the Bhangra Knights locked in a double ethnic submission on Travis and Kirby, when they failed to break the hold after a 5 count they were disqualified much to the dismay of the crowd! However feeling the injustice they decided to 'play the race card' and the match restarted.

I think Progress commentator Jimmy Barnett summed it up best at one point where he said "I have no f&@king idea what I'm commentating on!!"

Eventually Project Ego picked up the win, this is a must see match simply for the humour and interaction between everyone involved and also with the crowd.

After the match the London a Riots who wrestled their last contracted matches for PROGRESS at the last show hit the ring and destroyed the Bhangra knights and Grado threatening Smallman who was in the ring. Jimmy Havoc hits the ring with a steel chair in hand to chase them off. Smallman gets on the mic but as he does Havoc takes him out with the steel chair, stunning the crowd!

Havoc takes the mic and berates Smallman for taking him for granted, not caring about his injury or his future, always wanting to book him in death matches shortening his career and life, instead he brings him out like a mascot to draw his raffle and help raise money for his mothers cancer.

The crowd are all over Havoc and the Riots, but Havoc continues, stating nobody cares about him so from now on he's going to do whatever he wants to do!

Neither of these men require an introduction but Cruz is out to give one to the Champion regardless
.
The action goes back and forth throughout, each man seizing temporary control only to gave it wrestled away from them again. Both guys seem to gave each other well scouted and counter/stay away from each other's moves.

The crowd are really behind Williams and it seems to drive him on and annoy Cruz at ringside in equal measure
The match was hard hitting throughout, until finally Rampage manages to nail Doug with a pile driver to pick up the 3 before celebrating in the ring with Cruz.

Match is pretty solid in a nice little arena surrounded by a balcony which literally puts the crowd on top of the action. Joey Lakeside comes out on top picking up the submission win with a single leg crab

Overall a great show and the DVD presentation is very good, the multiple camera angles give a very immersive view of the action, at some points the cameras look filtered but it may just be the lighting affecting it but this is only for moments here and there. The commentary us very good, Jimmy Barnett is fun and it's very much a fan point of view but he does it in a way that is entertaining and not cliche ridden. As is fairly obvious from the review my highlights are the triple threat and 6 man tag matches - although admittedly for very different reasons! The Jimmy Havoc segment was great and shows what can be done with an adult orientated show, a lot of emotion boiling over and some brutality.

Guys like Eddie Dennis, Dave Mastiff, Nathan Cruz, Stixx, Sabre and Haskins all prove every time I see them that British wrestling is flying extremely high and this country has some of the greatest talent available, as well as some of the most entertaining characters going

Progress definitely lives up to the hype and I look forward to watching a lot more down the line. Right now I'm off to watch that triple threat again .....