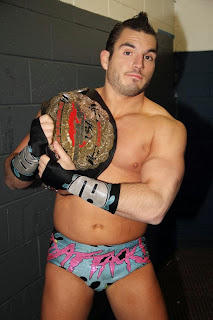 Johnny Gargano like a lot of the major US Indy stars are making regular stops to Europe and especially the UK. Gargano has been Dragon Gate USA's major singles champion since November 2011. Fortunately with the way that the UK scene is set up, imports are able to work for different promotions in the space of a few days so that it's easier for fans to get to see them.

I've seen Noam Dar wrestle live and also on DVD on a number of occasions and always been pretty impressed by him. He has good charisma and an ability to know how to get the reaction from the live fans. This usually comes from a cocky little heel that you want to get slapped.

Here though he's a babyface and we get to see him match Gargano with some really nice matwork and nice reversals and cradle attempts. Gargano has proven himself over the last couple of years to me than an annoying heel which was how he was presented to DGUSA fans originally.

He gave a strong wrestling performance here and Dar was certainly able to match him. Among the highlights was a suicide dive by Gargano, which was later followed by a dive from Dar. They also had a nice spot where both avoiding one another coming off the ropes which finished with a superkick by Gargano and then throwing the unfortunate Dar into the turnbuckles.

Dar though would get the big win following a stamp from the top, a great dropkick to the knee which led to securing the win with a kneebar. ***1/4

This is quite the tag team match, it starts with Gargano and Zack Sabre Jr doing some great mat wrestling until both men make the tag. Marty Scurll decides to kiss the referee and the official decides to beat an hasty retreat.

After finally being encouraged to return to the ring by Steen, the match becomes a good standard tag team encounters with the LDRS getting the heat on Gargano. That being said the crowd are just waiting to see Kevin Steen as he's treated as by far and away the biggest star.

Among the highlights is Steen doing a double Samoan Drop, Gargano hitting a slingshot spear followed directly into a suicide dive onto Zack. But the regular tag team of The LDRS are not to be denied when Gargano gets caught with a dropkick into a falcon arrow for the loss. ***1/2

This was a good example of seeing Gargano's lucha talents as it matched well with Ligero's general style. The match was a very fast paced encounter with lots of great mat based wrestling, slick armdrags and dropkicks a plenty.
They even managed to even include a dive which was pretty remarkable considering how close the audience was to the ring. What did frustrate me was that on the DVD the match was edited down and in some cases it seemed to have been edited for a couple of seconds at a time. It was a pretty maddening experience.

However that did not distract from the fact that this was another entertaining affair where Gargano and in this case El Ligero where able to showcase their talents. Gargano again experienced the bitter taste of defeat as he took another pinfall loss. ***1/4

So let me get my complaint out of the way, I absolutely hated how this match was shot. I also can't say I liked the fact the fans are stuck beyond a metal wire fencing, which encouraged the fans to bang on it constantly as it was a major distraction.

That being said this match was excellent, and was the first time I'd actually seen Jonathan Gresham wrestle. Again there is a real consistent thread of the talent producing some strong and very skilled mat wrestling with the odd big move thrown in.

This is also where Gargano defends his DGUSA Open the Freedom title so it kind of gives you the result before it even starts. That doesn't stop the fans really getting into the match and willing both men to victory. There is a full review of the show on the WLH website by Derrie Catton if you look back to August 2012, so I'm not going over it all again.

What I would say is that it is a really well paced and exciting match which I would encourage you all to check out. Gargano wins when he hits his Hurts Donut finisher twice to get the three. ***3/4

I knew from the tag team match that they had in wXw that these guys had great chemistry and were worthy opponents for one another. They did not disappoint, Sabre Jr is one of the best mat wrestlers that I've seen in a long time and while he doesn't particularly look that impressive as a physical specimen his ability to wrestle cannot be questioned.

Watching these two match holds and reversals reminds me of watching Nigel McGuinness in ROH during the mid 2000's and I say that as a major compliment. Among the highlights was Gargano while in submission hold but still being able to dump Zack over the top rope to the floor and then following with a great running dive.

Towards the end there were so many great transitions and cradle attempts that could easily be compared to anything that Malenko and Guerrero did in ECW in the Summer of 1995. Again though Gargano failed to beat his British opponent as Zack used two Dragon Suplexes for a close two count but quickly followed with the running penalty kick for the pin. ****

All the matches I've mentioned where all entertaining and were held in front of very vocal and enthusiastic fans who all seemed to being having a great time. Gargano is a very good wrestler and excels when he wrestling on the mat but his various opponents were all able to carry their share of the different matches and this points to the UK scene does not have to solely rely on US or Japanese imports but can use them to improve and highlight an already good product.
Posted by WrestleFigsUK at 02:08