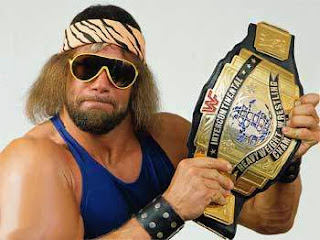 Randy "Macho Man" Savage debuted on WWE programming in mid-1985, soon rising to main event status in house shows against Hulk Hogan and Ricky "The Dragon" Steamboat. Looking over his early, pre-title winning days, you can see a calculating character on the rise; for example, a finish to a match with Steamboat was echoed some four or five months later in his Intercontinental title victory over Tito Santana in February 1986. It's the same coiled steal to the face while his opponent brings him in with a suplex. Savage's heel character blew up in 1986, particularly in the fall when he crushed Steamboat's larynx. I remember taping the match that was aired on WWE Superstars and watching it in slow-motion replay to see how his neck got pulverized.

As Savage's popularity grew, I noticed uncanny moments of character shifts, telling moments such as the night Honky Tonk Man beat Steamboat for the Intercontinental title. In a backstage segment, announcers were awestruck and let viewers know how strange it was that the first person to congratulate the new Elvis of wrestling was in fact Randy Savage. By the fall Savage was a full-fledged face, with Hogan now in his corner, it seemed like the Mega-Power rise would be the dominate storyline in professional wrestling for years to come. And their drawing power helped fuel the WWE into prime time and new pay-per-views (Royal Rumble, Summerslam) - yes technically the Rumble began in 1988 but in terms of an original four pay-per-view, 1989's classic was the first.

As Macho Madness peaked, Hulkamania went Hollywood for the second time (if you count Rocky III) and we all wondered if the eighties would end with a new champion replacing that which had defined the era. We of course, were wrong. Back from his cinematic break, Hogan returned to claim his spotlight, and Savage had to turn bad. It was during this time in Savage’s career that I see the similarity between CM Punk’s post-Rock WWE title loss and that of Savage. Savage became the Macho King, never held a title and was the semi-main event for nearly two
years.

The Macho King gimmick was solid, but didn’t get any real heat until the well-written program with The Ultimate Warrior. Fusing two strange and esoteric talkers, characters and wrestling styles worked, the problem was, after the retirement match, Warrior stayed on for six months and was fired, while Savage stayed on for six months as colour commentator then was quickly re-instated to feud with Jake “The Snake” Roberts, end that feud and go after Ric Flair’s WWE title. This is when the character changed into some form of immortality, a segue into the zeitgeist Space Cowboy Savage that many fans remember better perhaps, than his sequined robe of pomp and circumstance.

Savage was always my favourite wrestler, however, my book is structured in a way that painfully examines our similar rises and falls, in a very obsessive, and at times depressing way. We can generalize and look back on Randy “Macho Man” Savage as one of the all time greats, and bemoan the fact that he is a pariah, and not in the WWE’s Hall of Fame. But what made Savage special isn’t a sound bite or a top ten list or some random resume of greatness; it’s his ability to conjure up specific memories for a large portion of the now older WWE audience.

We all had individual memories of Savage whether it be as a 6 year old watching Wrestlemania VIII or a 13 year old watching Wrestlemania IV. Our individual memories of Savage and his work ethic, his place in our hearts becomes externalized and empowered through Youtube comments, wrestling blog and news site comments and pushes him to new levels of myth. The fact that, aside from a 2010 promotional spot for a Video Game and an action figure, Savage remained a JD Salinger-type recluse in the world of wrestling speaks highly about how he regarded his legacy.

He never returned to cash-in one last time. He never came in to show us how far he had changed from his youthful brash past. He never had to. He never need be in the WWE Hall of Fame because he is the most talked about wrestler each year when the shortlist is announced. A year after marrying his high school sweetheart, Randy Savage died. To me that is one of the most tragic love stories I have ever read about.

I saw Randy Savage live five times, including matches against Ricky Steamboat, Shawn Michaels and Scott Hall. I don’t know why I spent so much time thinking about him and what his character meant to my childhood, but perhaps with the publication of my new book, someone will let me know. Maybe it was just as simple as him being at the right place at the right time of my life. All I know is, his confidence, passion for what he did and style inspired me as a young person, and I’ll never forget his positive contributions to my survival as a teenager.

and Anvil Press www.anvilpress.com
Posted by WrestleFigsUK at 10:24