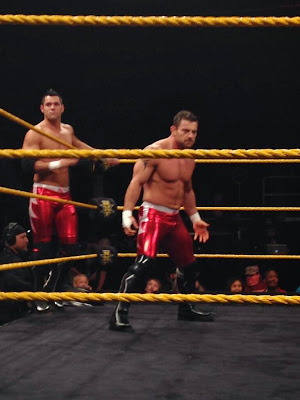 So, not only did the American Wolves receive yet another WWE try out but they were actually part of the last NXT TV tapings where they were billed as the American Pitbulls. Everyone knows I'm a big fan of both Davey Richards & Eddie Edwards especially Richards but in saying that, when I got to sit down with Edwards some time back for an interview he was a genuinely nice guy but anyway, if you like the facebook page or follow the twitter account then you would of seen comments from me on the subject of the guys going to NXT. So I just want to say a bit more. Now I am and massive fan of the indies both in the UK & US and I have had the pleasure of watching plenty of matches featuring a plethora of very good wrestlers from both sides of the pond including both Richards & Edwards and I am not saying it for the fact these guys are the subject of this article but two of the very best matches I have seen in recent times live in person feature both these guys facing in singles matches two of the UK's greatest stars. The match featuring Richards is below and this was against young Scottish wrestler Noam Dar that took place in Southside Wrestling and the Edwards match was a ladder match against MK McKinnan at Fight Club: PRO, unfortunately this match is not online or out on DVD yet but I hope one day soon it is because it was amazing.

Anyway, after going off on one for a moment, there have been many guys that have been signed by WWE that I was a big fan of on the independent scene such as Bryan Danielson, Claudio Castignoli & Chris Hero and more recently El Generico & Samuray Del Sol (I have not forgotten about CM Punk I just wasn't the biggest fan of his during his Indy days) and when they got signed I was gutted in a selfish way because I knew we would be losing some great workers and miss out on some great matches but on the flip side, I am also chuffed for the boys because, it maybe a dream of each and every wrestler to make it to the WWE and if so for the Wolves and the other guys I've mentioned then that's great but the way I look at it is a wrestlers career is only short in the most so if they can go and get some big money where in a few years they can just walk away and still be fit and healthy then that is amazing and I am nothing but chuffed for the guys and like now, will remember fondly the matches they gave us on the indies. So in closing on Richards & Edwards, I know you'll probably see this but I just want to say, thanks for what you have done guys and I hope you have great future going forward.

Onto another independent contractor, I also hear Colt Cabana, who of course had a run in the WWE in the past under the 'Scotty Goldman' name was also in Florida for a try out on Thursday and I have not heard if it was as a wrestler, commentator or another type of personality and if you listen to me on The Indy Corner podcast you'll know I'm not a fan of Cabana in anyway, shape or form so if the WWE have signed him or plan to I'll be very glad indeed just so he doesn't stink up the indies.

Stu Rodgers
Posted by WrestleFigsUK at 15:22