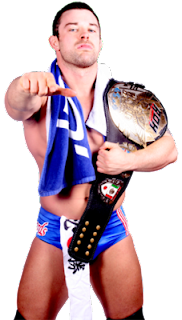 I was originally going to write a blog about how I felt that it would make more sense for Davey Richards to wrestle Eddie Edwards at Final Battle for one last time, rather than have them team together against Roderick Strong and Jay Lethal.

However just when I've got the whole thing laid out and about to write it up, I then find out that Davey has decided he's done with the company. Most fans know that the American Wolves have spent time at NXT as enhancement talent, which earned them the new nickname from some fans of the American Interns. Part of spending time down there isn't just about staring at the ceiling but finally convincing the WWE and Triple H especially that they are worth signing.

The good news for them is that the WWE are specifically looking for tag teams, the bad news is that although their wrestling talent cannot be denied. They are both small by the WWE standard and they are not blessed with great charisma. You also cannot tell me that size no long matters in the company, Daniel Bryan is an exception, a clearer and more valid example would be the decision to release Chris Hero (Kassius Ohno) who I would say has far more upside to him than either Davey or Eddie.

Anyway back to ROH, it seemed to be pretty evident that the American Wolves would finish up with the company at Final Battle. They would do the job, hopefully have a great match and endorse the remaining talent and leave to great applause. Sounds pretty simple? Not with Davey around.

The Wolves spent most of the year involved in a battle with the redDragon tag team (former protégé Kyle O'Reilly & Bobby Fish) who got the best of it and as I write this are celebrating their second run as ROH Tag champions. They weren't really involved in the biggest feud in ROH that being the feud against SCUM and the anarchic talents of Steen & Corino.

Davey on Facebook posted the following message "With a heavy heart, I can announce I announce that myself and ROH have parted ways for good and I will not be at Final Battle. Please continue to support them and the incredible talent they have, Thanks for the memories. It was an amazing ride."

It sounds that the split was amicable and it was down to the timing of events that he wasn't able to complete his ROH run at Final Battle as most expected.

There is also the fact that he cancelled a tour with NOAH this month so that gives an indication that all he's doing his clearing his diary and ready for the challenge of the WWE in 2014. That though does not take into account comments about ROH he made to the UK's Total Wrestling.

He was very critical of ROH's booking of both the World Title and Tag Team Titles over the last several months and said that he felt they had lost a lot of their importance and prestige. He also lambasted the company for the failure to get internet PPV's right, saying "If they can't get their crap together, that's their problem. I just worry about showing up, doing my job in the ring, and they can do whatever they want with that stuff. It's their deal."

So when he made his return to ROH they were not exactly thrilled with his less than glowing praise to the company that is employing him. Davey on the defensive went with the tried and trusted method of claiming his comments had been taken out of context. Sadly it appears that ROH aren't buying it and Davey has failed to follow the golden rule when talking about your employer. You should praise them in public and criticise in private, watch any Premier League manager on MOTD to see how it's done.

So it appears that the relationship between ROH and Davey Richards as come to end after more than seven years together, where they gave him the opportunity to showcase his talents and in return he gave them dozens of great matches and sterling performances.

To me it's a shame that Davey and ROH couldn't keep things together until Final Battle, it would have been a nice finale to the fans to see him end his time doing what he does best which is wrestling. Instead it all ended with a message on social network site amid accusations and recriminations. He is still listed on the ROH roster page, but his scheduled match for Final Battle as been removed from the show listings. So we will have to wait and see if this is really the end of this particular journey.
Posted by WrestleFigsUK at 11:09