My End of Year Awards By Shaun Nichols 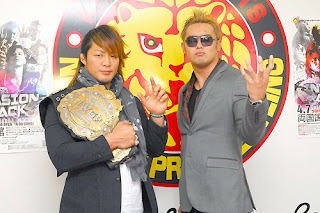 After skipping last year's awards season, I'm back to cast my eye of the past 12 months and acknowledge those who I think deserve it.

Wrestler of the Year: Kazuchika Okada

He's had a simply wonderful 2013, although he failed to win the main event of the Tokyo Dome show. He then rebounded to win the New Japan Cup to earn another crack at the IWGP title at Attack Invasion where he was able to defeat Tanahashi and start his second reign.

Since then he's been on an unbelievable tear having great matches on virtually all the big NJPW shows. The series with Tanahashi was an obvious highlight, but he's also had great main events with Makabe, Kojima and Anderson. His upcoming title defence against Naito will also be fantastic and the prospect of a feud against Nakamura in 2014 (they are both a part of the CHAOS group) is highly anticipated.

It was highly likely that one of their matches was going to win, but in my opinion it was their last match with the added stipulation of Tanahashi not being able to challenge again if he lost being a worthy winner. They built on what they had done in their earlier matches and ensured that the story continued to evolve. A great match in its own right but a superb finale to their series overall.

Shockingly it was the WWE that seemed to regain a little bit of focus in the tag team division. The stars of this upturn was The Shield and once Dean Ambrose broke off into singles action it was left to Rollins & Reigns to continue the good work.

They were very good the entire year and were key in moving the belts from the comedy team of Team Hell No to the current position of having the belts mean something. This is also going to be the only year they could win, as Reigns is obviously being pushed for bigger things.

Ok I'm back to giving awards to New Japan but let's be honest it is well deserved. NJPW had a lot of really great shows such as Attack Invasion, Dominion and King of Pro Wrestling but none of them had quite the consistency or the number of great matches that the Dome show had. Tanahashi vs. Okada, Nakamura vs. Sakuraba, Devitt vs. Ibushi vs. Low-Ki and Nagata vs. Suzuki were all **** or better.

Notable contenders apart from the NJPW shows already mentioned were WWE Summerslam (a two match card that really delivered), DG Dead or Alive and PWG All Star Weekend 9 Night 2 which was an awesome event that was let down slightly by the main event only being good rather than great.

Feud of the Year: Hiroshi Tanahashi vs. Kazuchika Okada

Yet again an obvious pick, well it was if you follow New Japan. They had four fantastic singles matches which were all above ****1/2 and had fantastic heat from the crowds watching. Right up there with the best in-ring feuds that we've ever seen.

There aren't really any notable contenders for this award.

Babyface of the Year: Daniel Bryan

See I'm not completed blinded by how great NJPW were in 2013. This is one of the most obvious picks in any category and if somehow you aren't convinced then let me remind you of the Slammy Awards show on RAW.

Not only did he scoop several awards for himself but the crowd hijacked the main event angle to illustrate just who they thought should be main eventing the WWE product. As Triple H was trying to promote 'the most important match in WWE history' between Orton vs. Cena, the fans were having none of it, they chanted non-stop for over two minutes Daniel Bryan's name. It was a very cool thing to see.
Again there isn't really anyone else who could have won it.

Heel of the Year: Bully Ray

Although things haven't been great for TNA especially in the last couple of months, there was shining beacon especially in the first six months. That was the antics and the promo ability of Bully Ray, whether it was explaining the nonsense of Aces & Eights or trying to get fans to rally behind Chris Sabin as a challenger. Bully was pretty great.

As most people know this airs on Challenge after Impact on Sunday nights and is on for a mere 30 minutes. I've tried a number of times to sit through it and maybe actually enjoy it. I've failed every time out. It might be that I'm too much of a wrestling fan and so it's not catered for me but that logic doesn't make any sense, the questions and conversations that Joel Ross and friends have seem so lame and generic and appear to only exist for their own personal amusement. It really is a terrible show.

Promotion of the Year: NJPW

I don't think I need to explain this at all.

Worst Booking Idea of the Year: The Booking of Daniel Bryan

There were two ideas that really bothered me this year and I'm going to give the second creative idea a different award. However with Daniel Bryan the WWE seemed to be intent of getting this badly wrong.

Fans don't really like a babyface being gifted a title shot like Bryan was at Summerslam, it's far better if the guy you want your fans to support actually earns it so they can get behind his quest to be successful.

However since Summerslam through to Hell In A Cell, it seemed that the best way to make him a genuine difference maker was by telling you how he wasn't. No top babyface as ever been beaten up as many times to close out TV shows and in the end all the excuses were that it wouldn't matter because he would win in the end. Not quite, to see where it all went wrong compare the booking of Daniel Bryan to the frankly great booking of Stone Cold in 1998. It's quite frightening to see the differences.

Why Bother? of the Year: The Booking of AJ Styles

In some ways this was even more stupid than the WWE's handling of Daniel Bryan. Styles supposedly had a contract that finished sometime round August/September time but following a year long storyline TNA wanted him to win the Bound for Glory series and then win the world title.

After you book that, apparently Styles agrees only to a contract to the end of the year and will not commit to anything longer or the two sides can't agree to terms. He still wins but fans only remember being treated as a child by owner Dixie Carter rather than getting a major and memorable moment by beating Bully Ray.

He then leaves, copying the CM Punk angle of 2011 but returns a few weeks later to drop a unification match to interim champion Magnus and now he's supposedly left for good. I don't care if Styles returns to TNA or not, I'm not invested in this story of if he has gone permanently or if he'll make a victorious return in a few weeks. I look at the storyline and all I can think is what a waste of time.

Breakout Star of the Year: The Shield

It was only just over a year that they made their WWE debuts saving CM Punk in his feud with Ryback, but since then they have played major roles in a number of PPV events and countless TV shows. They have benefitted from great booking where they have been kept strong and have been involved in feuds with all the major stars.

It's a shame that it looks they are on borrowed time as a unit but they had a fantastic 2013 and all three members should continue to succeed in the WWE.

So that's my thoughts for 2013 if you've got any opinions on anything I've said in these awards then you know how to comment.
Posted by WrestleFigsUK at 14:02