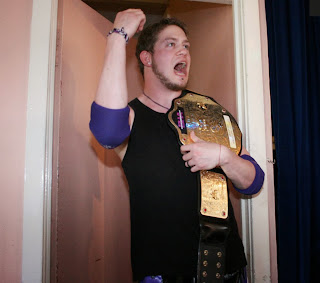 As some of you may be aware that follow Harvey Dale and Gareth Thompson on Facebook and/or Twitter, in the Summer of 2013 there was a very heated war of words regarding allegations made against Gareth Thompson's wrestling promotion, Bradford Wrestling Alliance. These allegations included shows being put on with no insurance, performers not being paid and certain performers on shows not having been trained. The war of words that followed between Gareth Thompson and House Of Pain Evolution promoter Harvey Dale ultimately led to Mr. Thompson pulling the plug on his BWA promotion.

The show that sparked the most controversy took place on June the 2nd in Wibsey WMC, the event which was a packed venue of wrestling fans of all ages featured a hardcore match main event in which drawing pins (thumbtacks in wrestling lingo) and blood were on display. Despite the great response from the crowd at the time, later on there were complaints from some parents regarding the level of violence on show for what was a family event. As someone who was in attendance that day I would like to go through the event match by match and break down by opinions on the show, the performers and how the show that brought an end to the company did overall.

The show began with the Anarchy Inc. team of Sean Only and PJ Rockerfella coming out to celebrate their birthday, despite this being my first time viewing the pair I though they showed great confidence of the microphone and as a team. Their celebrations were cut short when Priscilla Queen Of The Ring came out to give the guys a special present, then after a two on one beatdown of Priscilla, Lewy Ripper Paradise came down to make the save. This then led to BWA promoter and champion Gareth Angel coming out to book the match, it would be Anarchy Inc vs the team of Priscilla and Lewy Paradise to kick off the show. The opening match was a great way to warm up the crowd because you had the aggressive style of the Anarchy Inc team put in the mix with the likes of a quick flyer like Lewy Paradise and the always always always entertaining Priscilla, after a great back and forth it was the newly formed team of Priscilla and Paradise who picked up the win, I though this match did a great job of warming up the crowd and I though the right performers were sent out to do just that.

The next match on the card was a return match from the previous show which had Chris Taylor squaring off against Matt Marsay, this was a change in style from that first contest as we saw more of a ground grapple based match but despite that the crowd were 100% into it. The match had showcased a different style of wrestling from what was on show in the first match in which Taylor picked up the victory to level the score at one victory a piece. After the match Marsay got on the mic to ask Taylor for a third and final match for the next show, Taylor accepted, shuck Marsays hand and then Taylor did the classic heel move of sucker punching Marsay with the microphone. Overall I though this match did a great job of keeping up the level of excitement created from the opening contest.

Moving along the next match featured a performer who is making a great name for himself in 2013 making appearances for the likes of NGW and most recently Tidal, this man was Liam Lazarus. Lazarus did a great job of getting on the mic and gaining heat from crowd to get them riled up before his opponent the much bigger Bubba The Butcher Morris came out. This match was a great comedy affair which featured many chops to the chest for Lazarus as well as him being made fun of by the crowd and playing up to the crowd brilliantly. Liam Lazarus really is such a bright talent who I see great things for in the future. Bubba was the one who picked up the victory in this match which led to Lazarus being chased out of the building by the kids in attendance, that was a very funny moment.

Up next on the card after the intermission was the geek of British wrestling and in my opinion as I have said before one of the best comedy wrestlers on the UK scene, JG Nash going up against the grappler Paul Harris. This match was billed as a number one contendership match to the BWA title for a shot at the belt on the next show, JG Nash's Pocket Money In The Bank briefcase was then strangely also put on the line after some mic antics by both men pre match. This was yet again continuing with the theme of the show a very entertaining match perhaps even the match of the show mainly due to the work of one JG Nash who always has the ability to get crowds in the palm of his hands with his comedy work in the ring and on the mic. This wasn't the great "wrestling" contest that was seen earlier on in the show but it had the it factor that a professional wrestling match requires and that is be able to suck in a crowd and keep them entertained, this match did this. Harris was the one who picked up the win in this match which sent the crowd in to silence for the first time in the show and strangely like I said this meant that Harris was not only the number one contender but also had a case to cash in anytime he wanted.

And now I bring you to the main event, the match which was the start of the controversy surrounding BWA and that is the hardcore for the BWA title featuring the champion Gareth Angel (Gareth Thompson) taking on Sebb Strife. Now of course the issue of the promoter of the company making himself the champion is always a controversial thing to do if you are working on the independent scene, if it was me I would never book myself as a champion or main eventer purely to avoid that type of backlash that you are bound to get from fans, workers and other promoters. An added stipulation to this match was that fans could bring the weapons but of course with it being a family show it would be the style of fans bring the weapons match you would see in CZW. I know this match did cause some controversy but as somebody who was in attendance at the time I can honestly say that the crowd of kids and parents were 100% into the match which ended with a win for Angel. This lead to a surprise appearance from Matt Slater who Angel beat to become the champion, we then saw a three on one beatdown of Angel at the hands of Slater, Strife and his tag team partner Paul Harris. The show ended with Slater, Strife and Harris raising each others hands and the newly won pocket money in the bank case which personally I thought would of set up some interesting things to come.

Overall I would give the show a definite passing grade and yes I do know that the show is up on Youtube and no it probably isn't all that good to what but then again nor is wrestling show with no commentary or promos etc. Watching a wrestling event live is completely different story, you are right there to experience it all face to face but when I buy a wrestling DVD/Blu-Ray if it doesn't feature any commentary or promos in between matches then I find it so very hard to watch this can even be said for the early PCW shows. I think the people who actually attended the show would have a completely different view to the people who have only seen it online, it really is far from the same thing.

On a final note, should someone be running a wrestling promotion and not sorting out insurance? Of course not and I think Gareth will admit he was in the wrong there, the thing is he was probably more excited about having a wrestling promotion and bringing regular wrestling to Bradford that he didn't do his research fully into what was needed to run a show. I don't think he intended any harm or to bring British wrestling into a bad light (it doesn't need much help to do that anyway), he was just a fan with a dream who didn't do his homework before hand that is all. I think if Harvey Dale was instead willing to offer out a hand of support being a successful promoter himself instead of trying to bury Gareth the perhaps BWA would still be here and the would be doing business the proper way.