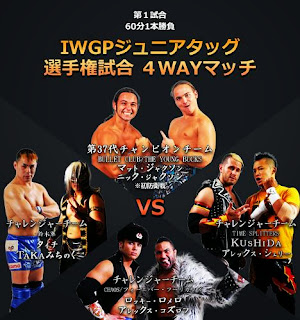 Over the last eighteen months NJPW has been on a tremendous role, with a number of outstanding shows. Last years Tokyo Dome, Attack Invasion, Dominion and the King of Pro Wrestling PPV events would all be considered as worthy contenders for Card of the Year. They now look to keep that role going into the new year.

Shinsuke Nakamura vs. Hiroshi Tanahashi for the IWGP I-C Title

Surprising to some, this battle for New Japan's secondary title gets to main event the show. However they are both incredibly charismatic performers and it's a match that the fans haven't seen for over two years in a major meaningful contest. Nakamura has done an excellent job in making the relatively new title into something of importance. Tanahashi due to the stipulation of the KOPW main event can't challenge for the world title until Okada loses it.

A strong case can be made for either man to win, Nakamura is the major star who hasn't had the opportunity to challenge for the world title so if he wins then that would be the next step. Tanahashi needs to be keep prominent until Okada drops the title, having him have a run as I-C champion maintains his presence at the top of the card. It also doesn't hurt the belt having someone like Tanahashi be the champion.

Kazuchika Okada vs. Tetsuya Naito for the IWGP Heavyweight Title

Okada must be incredibly frustrated not to get to main event slot, but that decision is down to the fans reacting to Naito rather than Okada. They teased a title vs. title match, as Naito is currently the NEVER Openweight champion after beating Masato Tanaka in September. Okada did a promo saying the title was beneath him and he didn't want it, these two had a fantastic match in February 2012 in Okada's first title reign and I'd expect another really great match.

Prince Devitt vs. Kota Ibushi for the IWGP Jr. Title

Devitt's heel turn and becoming the leader of the Bullet Club as from a storyline perspective being a major highlight in New Japan this year. He's also spent the majority of the year battling the heavyweights and challenging both Okada & Tanahashi. What that as meant is that his title run as Jr. champion as been pretty forgettable.

Ibushi has signed a contract with NJPW, so he's now a part of both NJPW and the DDT promotion which is a first for NJPW. He's a big favourite with the fans and he has great chemistry with Devitt so this is going to be another superb match
.
Prediction: Kota Ibushi

These two have had some of the stiffest and hard hitting battles you could ever have seen, with the highlight being at Dominion. NJPW could be accused have going to the well too often and we've seen the double knock out spot along the way.

Goto has been out of action since the G1 Climax tournament with a broken jaw and this will be his return to action. In the world of parity booking that you see in the WWE then Goto would start with a win. Shibata is one of those wrestlers that fans really want to see and seems to be on the verge of great things and then he's booked to lose. Here's hoping that the Shibata's latest roll doesn't come to an end.

This is a match that can only end in a TKO, knockout or submission. Fale is Devitt's enforcer and by NJPW's standards he's a huge guy. He's picking up his wins using Hernandez's Border Toss where the guy ends up leaving on a stretcher.

Makabe is a pretty good brawler but can do more although that won't be the case here considering he's facing Fale who is very limited. Technically this won't be great but they have built this up for a quite a while so it should have some heat. Look for antics of the Bullet Club to be the difference.

Will this rather tedious feud between Suzuki and Yano ever end? The thing is that Suzuki should really be in more important matches, he's already beaten up Yano more than once. Yano and his regular partner Takeshi Iizuka are fine in the first couple of matches of a show but that's really it. Yano hasn't announced his partner yet, Suzuki says he knows it's Bob Sapp and he doesn't care. To be honest I don't care about this match either.

This is billed as NJPW vs. Gracie Jiu Jitsu, with the idea of using memories of Sakuraba's golden period in 1999/2000 in Pride where he faced and defeated a number of Gracie family members. Who knows if anyone will care about the Gracie clan in 2013, this will be a completely unique match compared to anything else. Expect ratings from a DUD to ***+ depending on your perspective.
Prediction: Yuji Nagata & Kazushi Sakuraba

Rob Conway vs. Satoshi Kojima for the NWA Heavyweight Title

Conway has been defending the NWA title on NJPW shows for the majority of 2012, including wins over Kojima, Nakanishi and Liger. Conway his a decent worker but he's yet to really click with the Japanese audience. He's booked as the arrogant foreigner who needs outside interference to get the job done.

Kojima is trying to get revenge after losing at Attack Invasion to Conway and if regular tag partner Tenzan needs to take a break then this gives him something to do.

It's pretty unusual for the tag title match not to feature any Japanese wrestlers, all though this could be the start of a feud between Suzuki-Gun (KES are members) and the Bullet Club.

Anderson & Gallows won the tag league to earn this shot, Anderson has been a major star in NJPW for a couple of years now but as a habit of losing the really big matches. So a win here would be a nice reward for him.

This should be all kinds of fun and incredibly fast paced action with lots of dives, it will also be the biggest match of the Young Bucks career and they are the defending champions. This really could be a match that any team could win, it's also Alex Shelley's comeback and as the Time Splitters are the only obvious babyface team I'll go with them.

There is also a pretty good chance of another match being added as there are still a number of fairly big names that don't have a match yet. Among those still waiting is Tomohiro Ishii (he had a great 2012), Jushin Liger, Tiger Mask, Takeshi Iizuka (the guy who always attacks the announcer), Tomoaki Honma, Captain New Japan, Yujihiro Takahashi and YOSHI-HASHI to name a few.

The top four matches all look outstanding and the two tag matches to open the show should both be really entertaining. After the tag matches though there isn't really anything special that stands out until the Shibata/Goto match. It doesn't quite look as good as the 2013 Tokyo Dome show which was an amazing show, but it should still be an awesome show and one that wrestling fans should be hyped to see.
Posted by WrestleFigsUK at 09:40