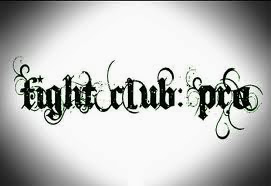 How many times can one man rain praise on a promotion? Well it will already be a lot by the time review rolls out, and that alone should speak volumes about Fight Club: PRO. But it also sets a bar consisting of a high level of expectation and a promise of greatness, and all things should be judged by how well they meet their promises. You enter FCP expecting strong wrestling, moments of awe and an engrossing atmosphere. As such, these are the ideals to hold it up to.

Fight Club: PRO remains in the basement of a nightclub with a bar providing any alcohol you require. Surrounding a ring is a metal fence which has been pounded into submission by many an excited fan. Fun and rowdy sums up the crowd's personality. Chant what you like and gain a few laughs at the mention of Tyler Bate's moustache or gain a few retorts from Mark Haskin's sharp tongue. All give a great sense of involvement which make being an audience member rewarding. Isn't fun the best way to get your wrestling fix?

And this is wrestling of course, FCP are never one to dance around that. Arguably it was Trent Seven, Chris Brookes, Daniel Mahoney and Wild Boar with the match of the night. After leaving the opener with the hard task of warming up the crowd, the four came out with non-stop action which simply couldn't be matched. Thrills came in quick succession along with moments that generated audible gasps and deserved applause. Each competitor was on high form, with Trent Seven reminding fans why he is a top flight roster member and Chris Brookes putting in one of his best performances to date. Mahoney and Boar complimented the match too, as they begin to stand out as competitors at FCP. Honourable mention has to go to MK McKinnan and Dave Mastiff for providing the excitement a ladder match should deliver. The pair created the most awe inspiring moments of the night, managing to find the right chemistry to put together a strong match.

FCP continues to excel in the field of wrestling, and push forward into the new year with plenty of promise. A challenger seeks a fair fight. A title holder continues to bulldoze the competition. A tournament winner awaits a title match. And a returning Dan Ryder seeks to raise hell. These stories look set to unfold in outstanding fashion, so get to the facebook and the twitter to follow Fight Club: PRO as they reveal their future plans. All in all, it makes 2014 look like a solid year to pay five pounds for a great wrestling event.
Well done for 2013 FCP, and here's to many more.
Posted by WrestleFigsUK at 07:21