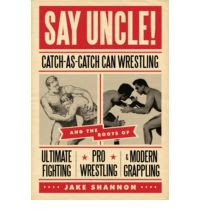 Jake Shannon an author of many subjects varying from hypnotism to catch-as-catch-can wrestling, he is currently the Chairman of the Libertarian Party of Utah and a life long member of the Cauliflower Alley Club, Jake is also a well respected grappling historian. He has been trained by many of the true legends of catch-as-catch-can and also learned in other forms of grappling, Jake is also the inventor of the Macebell.

Say Uncle! Is not an in depth look at the history of professional wrestling, UFC or modern grappling, it is more of a guide to what it takes to be a catch-as-catch-can wrestler. Starting with an introduction to the author, Jake Shannon, explaining his training and how he has studied the traditional sport of catch-as-catch-can. Then going on to lay out the basic rules of the sport followed by a small explanation of what is required by a participant, this is all very useful providing just enough knowledge to understand what it really was like in the late 19th and early 20th centuries. Jake naturally then flows on to how the sport has effected the sports or forms of entertainment mentioned in it's title, all the while providing sources for information at the bottom of each page, including stories that explain exactly how catch-as-catch-can directly influenced other forms of grappling. The main focal point of the work is the collection of 10 very interesting interviews with various legends and modern day grappler’s such as Karl Gotch, Billy Robinson, Gene LeBell, Yoshiaki Fujiwara and Josh Barnett. Some of the interviews are quite lengthy whilst others are more straight to the point, discussing the history of wrestling, where they trained, who they were trained by, what the training consists of and certain holds. Shannon wraps up with his conclusion, which he quotes the ever acclaimed opening of Martin “Farmer” Burns' Lessons in Wrestling and Physical Culture II.

With the included 51 page manual breaking down catch-as-catch-can in a scientific manner including tips, methods and techniques, all of which are explained using examples of how it would work. Covering principles, conditioning and a 32 page pictorial demonstrating holds and transitions, the book is a necessity for any aspiring catch-as-catch-can grappler and for any other form of grappler at that. Then taking into consideration the short but captivating history at the beginning of the book, the interviews, Karl Gotch's modern rules to the sport combined with the lexicon Say Uncle! Catch-as-Catch-Can Wrestling is a real gem of a book for any wrestling historian also.