Will The Nightmare End? By Stephen J. Sutton 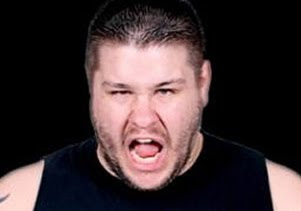 Ever since his return during the Best In The World Internet Pay Per View back in 2011, Kevin Steen has been causing controversy within the Ring Of Honor company and on the Ring Of Honor roster but a former “friend” could put the nightmare to rest in one of the companies rare stipulation matches at Final Battle 2012 .

The anti Christ of professional wrestling left the promotion in December 2010 after losing a Career vs. Mask match against former tag team partner El Generico at Final Battle; Steen stayed away from the promotion until he was invited by Steve Corino and Corino’s sponsor Jimmy Jacobs to announce that he has left his evil ways, Jim Cornette wasn’t convinced and but was convinced by Corino and Jacobs to allow Steen to return at Best In The World and to prove that he has changed for the good.

At the Hammerstein Ballroom the New York faithful blew the roof off the Ballroom when Steen returned through the crowd ready to what denounced his evil ways but Steen had other idea grabbing the ring mic and shouted “F*** ROH” then hitting a package piledriver on Steve Corino and was carried out of the Hammerstein Ballroom in the crucifix pose; in a interview with United Kingdom’s Powerslam’s (conducted by Fin Martin) Kevin Steen said

“The Best In World” was pretty emotional. It had only been six months since the match with Generico – but people might not just how dedicated and obsessed I was with ROH. Especially throughout 2010: 95 percent of my time was spent thinking about how to keep things interesting and what to do next in ROH. So, being away for six months was really tough.

Making that return appearance was something I had pictured in my head a thousand times before it happened. Literally, from the moment I got in the car and started the drive home from NYC in December Final Battle 2010, I was thinking (about) how it should happen, how people would react etc. So yeah, it was a big deal to me when I did go back. Very intense moment.”

It wasn’t till Death Before Dishonor X that Steen’s presents was felt again interfering in the match between El Generico and Jimmy Jacobs, Cary Silkin attempted to calm Kevin down but that never led to nothing when Steen attempted to package piledrive Cary Silkin but the ROH locker room came out to help Silkin and remove Steen from the building (after Jim Cornette got a shot on Steen); then he cut an anti Ring Of Honor promo outside the Manhattan Centre after Death Before Dishonor.

“Did you enjoy the Ring Of Honor event? Did you enjoy the Davey Richards match? Before you mother f****s cut this mike off me I have three things to say.
1 Generico I’m never going away
2 Corino your in Japan right now if you see Davey tell him he’s a f*****g p***y if he’s a real champ he’ll be right here.
3. Jim Cornette, Vince Russo can kick you a*s; and just to p**s him off “Let’s go Russo.” Even I won’t chant that but Jim, Vince Russo won’t kick your a*s but you know who would and you know who will ... me.
Jimmy Jacobs this is for you think you can change people all you doing now the same s**t you did with Age Of The Fall, back then you where changing people into a******s now your turning them into p***yies I think it’s time you start changing them into d***s mother f***r !

“Ring Of Honor will not to business with Kevin Steen and if he don’t like that he can sue me.”

Kevin responded to those comments by filing an injunction against the company and Jim Cornette, Steen asked to be reinstated to the Ring Of Honor roster or information about Cornette will be released. Kevin had decided to do things the Cornette way and he is coming back to Ring Of Honor and he’s not going away! He’s frustrated that he is not in the best company in the world because that is where he belongs and to prove it to Cornette that he’s best even if that means beating Davey Richards for the ROH Championship and he will.

Steen turned up to Television (with three of his lawyers in toe) to confront Jim Cornette, Jimmy Jacobs and Steve Corino; Corino offered Steen a match at Final Battle 2011 in which if Steen won then he is reinstated into the promotion and can be made reference in the company’s historical references; and as promised from the promo outside the Manhattan Centre at Death Before Dishonor it wasn’t a match it was a fight which saw Steen reinstated and putting the Generic Luchador through a ringside table.

Next time the Generic Luchador and Wrestling’s Worst Nightmare was at Wrestlemania Weekend during the Showdown In The Sun show night one where they met in a La Revencha Last Man Standing match and once again this wasn’t a wrestling match it was an all out fight seeing barricade’s, chairs, tables even the Canadian maple leaf flag used as weapons to render each other to answer the ten count; the lost for El Generico wasn’t enough, Jimmy Jacobs an ally El Generico thought he had collected in his battle against Steen turned his back on him to join Kevin Steen and spiked him in the head with a railroad spike. Next time El Generico stepped into the ring with Kevin Steen was at Unity where Steen teamed with his new found ally “The Princess Zombie” Jimmy Jacobs to take on El Generico and someone from Jacobs past who can brawl with best of them and was returning to the promotion after a four year absence BJ Whitmer (last appearance being back at ROH A Next Level in New York City); once again this wasn’t your bog standard wrestling contest this was another fight and saw Steen using a tennis racket as a weapon; although BJ and Generico won the match, Generico was attacked the following night at Rising Above 2012 and then disappeared from the promotion.

While Generico disappeared from the promotion; Jim Cornette’s nightmare was realised at Border Wars where Kevin Steen captured the ROH Championship from “American Wolf” Davey Richards. In a interview on Monday Night Mayhem Kevin Steen said

“Achieving that (winning the ROH World Title) is a great accomplishment and something I will always look back upon fondly when my career is over, but to be brutally honest, I wanted to win that title because it would help me kill the company. It’s not the same since Jim Cornette took over. I love Ring Of Honor, and I don’t want to see it in the state that is it now, so I figure why not put it out of its misery.”

Cornette hated the fact that Steen was ROH Champion; he threw challengers in Steen’s path from Davey Richards to Mike Bennett; Cornette got so desperate he even brought in Chikara’s Grand Champion Eddie Kingston to attempt to take the Ring Of Honor Championship from Wrestling’s Worst Nightmare but was unsuccessful. It was after the championship defense at Glory By Honor X against which got interesting.

After a hard fought victory against “The Unbreakable” Michael Elgin, Steen started to gather his breath back until Ringside Colour Commentator Nigel McGuiness stepped into the ring and handed Steen a package and in that package was an El Generico mask; Steen stood in the ring with a face like he’s just seen a ghost in which he thought he’ll never see again. It wasn’t announced till the television tapings by the new Ring Of Honor match maker Nigel McGuiness that Kevin Steen will defend the Ring Of Honor Championship at Final Battle in New York City in a Ladder War!

Outside the Ring Of Honor promotion Steen and Generico have been feuding in both the United States and in Canada. They have fought forty seven times with eleven of those matches being fought in Ring Of Honor, thirteen of them have been championship matches. Generico has beaten wrestlings worst nightmare in Ring Of Honor on two separate occasions one being the match that sent Steen packing from the company he much loved.

Can this Sunday mark the end of wrestling’s worst nightmare?
Or
Will the nightmare continue in ROH ?