Feeding My Habit By Rock Rims 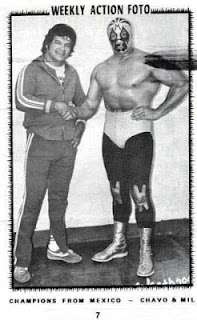 I was addicted. There’s no two ways about it. While the people who were close to I thought I was doing one thing, I was actually doing another. I was sneaking around in the middle of the night, always worried about being discovered, paranoid, jumping at every sound… and I was only 7 years old…

Yeah…that’s right… a 7 year old addict. Because when I was supposed to be sleeping, I was sneaking out of bed and getting my night time television Wrestling fix. I was always worried about getting caught, because I knew if I did, I’d probably get as bad a thrashing as any of the wrestlers on the TV show I was watching. But to me it was worth the risk. Those are just the kind of risks that an addict is often willing to take. Not that I didn’t take precautions though. I’d turn the volume on the television down really low, sit so close to the set that you’d think I was in the ring itself, and I’d shove a blanket under the door to my parent’s bedroom so that they wouldn’t see the flickering light from the TV set. And of course I’d pray that my Stepdad didn’t have too many beers before he went to bed, and as a result have to make a late night trip to the bathroom.

But in reality, he was partly to blame for my addiction. After all, one of my first memories was when I was 3 years old and living in East Los Angeles (Yeah, I’m Latino), and we were both climbing the fence in the backyard, in a hurry to catch the bus in order to make that evening’s wrestling matches. Even now, I can vividly recall the excitement and anticipation I felt that night, and it truly was a supercharged night, due in large part to the main event that evening. For the main event was going to be a feud match between “Classy” Freddie Blassie and “Maniac” John Tolos. The year was 1971, and when I got older I would learn what a special place that feud would hold in Los Angeles Pro Wrestling History. But in all honesty, even at 3 years of age, a couple of years before I would even learn to read, I knew that the match was something special. We sat high up in the nose bleed section, but the drama of that intense and bloody match was strong enough to be felt even where I was sitting.

And I was hooked, hooked for life. And my first Halloween memory was from the age of 3 as well. I don’t remember anything about the candy, but I definitely remember that my parent’s had a hell of a time trying to get me out of my wrestling mask at the end of the night. It was itchy as hell, but there was no way I was going to submit.

And through the years I would have many more pleasant experiences as a result of my love for wrestling. And during those critical formative years, before the days of cable TV, before wrestling programs were being broadcast from various territories around the country, and before tape and DVD trading would expose fans to international wrestling, there was only one wrestling world for me. And that wrestling world was Mike LaBelle’s Southern California Wrestling Territory, particularly wrestling from the famed Los Angeles Olympic Auditorium. And what a world it was!

Through the years, I’d watch either on television or at the occasional live event, local mainstays and future legends such as the Guerreros, Carlos Mata, The Twin Devils, Black Gordman & The Great Goliath, Bad News Allen Coage, Victor Rivera, Maniac John Tolos, Classy Freddie Blassie, The Hollywood Blondes, and many more. And then there were the visiting greats, people who up until that time I had only read about in the wrestling mags, or heard being hyped about by Jeff Walton either during the television programs or in his souvenir wrestling programs. People like Harley Race, Superstar Billy Graham, Terry & Dory Funk Jr., Wahoo McDaniel, the Original Sheik, El Halcon, Moondog Lonnie Mayne, Rowdy Roddy Piper, Adrian Street, the Eighth Wonder of the World Andre the Giant, Tatsumi Fujinami, Seiji Sakaguchi, and my absolute favorite visiting wrestler, the legendary Mil Mascaras.

But as great as it was to have those visiting greats (some of whom I’ll be writing about in the near future), it was always the mainstay local wrestlers who were the foundation that the territories were built upon in those days. These were the talents that the fans would watch week in and week out, and these were the ones that the fans became emotionally invested in. And of those mainstay wrestlers in L.A. during the 70’s, the one who stood head and shoulders above everyone (in esteem and position if not physical stature) was Chavo Guerrero Sr. And for the rest of this piece, I’m going to drop the “Sr.”, because no offence to his son, who is talented in his own right, but there really is only one Chavo Guerrero.

From 1975 through 1980, Chavo Guerrero, the eldest of the legendary Guerrero brothers was the main “face” in the L.A. territory. In addition to having a great wrestling pedigree, being the son of the Mexican Wrestling Legend Gory Guerrero, Chavo had a great wrestling background, having been an accomplished amateur wrestler in addition to having trained in judo. And more importantly, he was trained from a young age by his father in the fundamentals of professional wrestling, and had great athletic ability.

But it takes much more than physical attributes and skill sets to become a success in the world of professional wrestling, especially when it comes to the long term, something that many of today’s “stars” fail to recognize. For one thing, one has to be willing to learn from the veteran’s, and fortunately, Chavo was both willing and able to do that. When visting veterans and World Champions like Terry Funk, Dory Funk Jr., Harley Race, and Superstar Billy Graham would come through the territory, they would talk, and Chavo would listen. This on the job experience paid off both for Chavo and those of us who would watch him.

And another thing that Chavo had going for him was that he understood the importance of good ring psychology. He understood and practiced the art of telling a story in the ring, of building a program, and getting the fans to become emotionally invested in him, the match, and the program. And it’s that high emotional involvement, and that escapism, that are such critical factors in a wrestling fan’s enjoyment. And Chavo understood that and delivered.

And those qualities contributed to his appeal. For while we all knew and had faith that going into a match, Chavo could beat his opponent, he did a great job of leaving us hanging, wondering if he would in fact defeat his opponent. Because another part of ring psychology that Chavo understood was that when you make your opponent look good, you look good. For another part of good ring psychology is putting over your opponent. After all, how fun is it to watch a wrestler beat a nobody, someone who appears to be infinitely inferior? And that’s another thing that some wrestlers fail to recognize. In their fixation to get in their “spots” or as many spots as possible, in their fear that their opponent getting in any offense will make them look “weak”, they often fail to build a story or put over their opponent. And yet, if you watch videos of some of the all-time legends in Pro Wrestling, like Harley Race, Ric Flair, Bret Hart, and Superstar Billy Graham just to name a few, you’d see them bumping all over there place for their opponents. And their place and stature in Wrestling History cannot be disputed. Fans who truly appreciate the true art of professional wrestling want to eventually find themselves sitting on the edge of their seats with anticipation. And Chavo was one of the ones who both understood that and delivered.

Without a doubt, as both a young fan of Pro Wrestling, and a Mexican-American growing up in the L.A. area, Chavo Guerrero was one of my boyhood heroes. I don’t think that when he started out in the wrestling game that he set out to or even imagined holding such an important place in the hearts and memories of those that watched him perform. I don’t think that any Pro Wrestler sets out to do that in the beginning. But some do accomplish that very thing, especially for those of us who grew up during the territory days, and hopefully, just hopefully for some of those who will grow up with the Independent Wrestling promotions.

I finally had the pleasure of meeting Chavo in person several years ago, and we enjoyed a pleasant conversation together, talking about our memories of the 70’s L.A. promotion. He said then what he’s also said on many other occasions, that he was just “in the right place at the right time.” While I agree with that, as that’s really the case with anyone who ever earns a place in history, it really doesn’t tell the whole story. While he benefited from being Gory Guerrero’s son, while he was in the right place at the right time, Chavo still had to have the ability to carry the ball and run with it. Even if a football coach can get his son on a team with his connections, and even if the offensive line can create a “hole”, the running back still has to be able to run with the ball. And Chavo ran, and ran hard.

And he’s one of the ones that contributed greatly to my being hooked on the true art of Professional Wrestling. And I don’t think I want to find a cure.