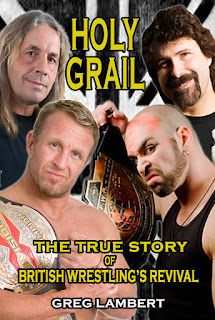 Pro wrestling in America is a multi-billion dollar business. Pro wrestling in Britain is skint and hasn't been on national television since the days of Big Daddy and Giant Haystacks. For British Wrestling, a resurrection is long overdue. But with no money and no TV deal, the revival was never going to be easy…

Greg Lambert was just a wrestling fan until one night, he innocently turned on the radio and life was never the same again. As Britain’s unlikeliest ring villain and head of its most famous wrestling company, the FWA, Greg embarked on the quest for British Wrestling’s Holy Grail - a five-year odyssey of ecstatic highs, depressing lows, extreme violence, financial meltdown and encounters with wrestling superstars like CM Punk, Daniel Bryan, Mick Foley, Bret 'The Hitman' Hart and Jake 'The Snake' Roberts. Crammed with Greg's personal experiences, opinion and insight into some of the biggest British Wrestling events, issues and personalities of the past decade, this is the inside story of how a hungry new generation of UK wrestlers fought to emerge from the shadows. This is the true story of British Wrestling’s revival.

Holy Grail: The true story of British Wrestling’s revival is now on sale in paperback priced £11.95.

Order now from the Authorhouse website at http://www.authorhouse.co.uk/Bookstore/BookDetail.aspx?Book=430978 and from www.xwawrestling.com

The author will donate 25% of royalties from the book to UK anti-bullying and child protection charity Kidscape (www.kidscape.org.uk)

Greg Lambert is available for interview and copies of the book are available for media reviews on request. Please email enquiries@xwawrestling.com 0567945.