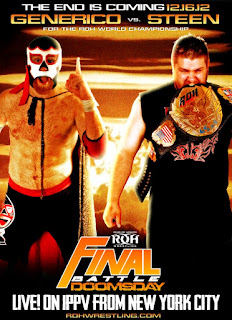 Please allow me to use a quote from a recent post regarding the history of The Ladder War via the Ring of Honor Website. “If their Career vs. Mask fight at “Final Battle 2010” is any indication of the lengths Steen and Generico will go to when they fight one another, if the previous three Ladder Wars are a portent of things to come at The Hammerstein Ballroom on Sunday, then Final Battle 2012 may prove to be a true doomsday not for ROH, but for the careers of both Kevin Steen and El Generico,” (Via rohwrestling.com).

As concise as the above quotation is, it appears as a perfect indication of what Final Battle 2012’s focal point is and has been since a specific turn of events took place at Glory By Honor XI in back in October. There is generous portion of go out of your way to see matches scheduled for the iPPV this Sunday. However it is no secret the ROH fan-boys that Matt Hardy has referred to, are in more of a dire need to pop for El Generico than for him and/or his match against Adam Cole. Allow that to stand as testament to the enormity of Final Battle 2012, rather than a partisan display of passionate fandom. The Ladder War 4 between El Generico and Kevin Steen is obviously the main-event; it obviously stands alone on the card. What seems like one more final battle to end a series of final battles obviously pulls the majority of the weight for this show. However, as I previously alluded to, this show contains plenty of time-worthy bouts, bouts that each and every ring of honor/independent professional wrestling fan should be able to appreciate, justify and furthermore enjoy. The matches below have the potential to range from just okay, to show stealer, to match of the year candidate. The card will be topped off by two men with two incredibly bloodstained resumes re-engaging in warfare; as these same two, two of the greatest stars of honor re-initiate one of the greatest rivalries this promotion has ever seen. Once again, from top to bottom ROH has put together one of the stronger cards the independent professional wrestling scene has produced throughout all of 2012. A succinct sample below, previewing what is to come at Final Battle 2012 on Sunday. December 16, will hopefully provide enough of a snippet needed to justify my eagerness to declare Final Battle 2012 as a spectacle, and nothing other.

Sit back and have a good chuckle. You will be hard-pressed to find better comedic work produced anywhere else in this entire industry. Case in point.

This match may be composed of less intrigue than a lot of the others set for December 16 but the added stipulation surely does more for this match-up, than less for it. Spontaneous is the word that defines how these four came to bumping heads. Kenny King leaves for TNA in the middle of a WGTT/ANX feud, Rhett Titus is left handicapped and BJ makes the save. End of story. It is simple enough, but incredibly real enough also, therefore as a bit of a closet Titus fan, this serves as a much better viewing opportunity than watching him be hung to dry following the loss of his tag-partner and tag-team championships. These teams have met before in the ring, including once before on iPPV at Glory By Honor XI. Whether you like the team of Whitmer and Titus or don’t, or whether you are fans of what WGTT has done in ROH or not, there won’t be much wrong with what these four could dish out in New York City under street fight rules.

After a spitting incident that led to a massive brawl between Cornette, Steen, Lethal and even Lethal ‘s Mother, back in October at the Killer Instinct event, Lethal was subjected to a stipulation claiming he cannot compete for the world title until Steen is no longer the champion. Therefore unfinished business with Steen has led him to new business that he would like to finish at Final Battle 2012 on Sunday. Wondering what happens to Lethal and where he goes from here stands as a solid reason for any potential intrigue regarding this match; but that is not to take away from what they can deliver in the ring.

A lot can be said for the potential American Wolves, Fish/O’Reilly show stealing tag-team contest. Although I do believe if that label is going to be contested for, this match-up, that officially features the full implosion of the House of Truth, is the match that will make the attempt to do so. Elgin has not only had one of the best years in ROH out of anyone the roster dishes out to compete, and better yet the same can be said on a much larger scale. Elgin has had one of the best years in all of professional wrestling throughout all of 2012. These are facts and these facts are single handedly large enough to apply some rather hefty expectations prior to the opening bell on this contest. Meanwhile, remaining inside ROH, the build from disagreement to bitter enemy tells the tale of how these two ended up in a grudge match at a show known for putting together feud settling match-ups. This will be wrestling.

This Sunday, there may have been just enough room for one more Mondo/Bennett encounter but with Mike Mondo’s injury that took place against Bennett at Glory By Honor XI in October, Mondo’s bad-luck shifts into another crack at a wrestling legend for Bennett following his trilogy in ROH this year with Lance Storm. When someone like Storm or Lynn is there to carry you through a match, the content they are capable of providing shouldn’t take much thought, as it has been out of the bag since they became legends in this industry. Boston’s Bennett gets heat in New York and potentially a Legend puts him over, seems fair and justifiable enough to me. Lynn has an ROH resume that includes and ROH World Title run. Many may argue the final page of his resume should have been formatted a little differently, but with that said, Bennett or no Bennett, too many of us are looking forward to Lynn’s appearance, to over, or even under evaluate.

Bobby Fish will be making his ROH iPPV debut at Final Battle this Sunday and that fact alone suggests the effort put forth in this particular match-up will declare it as 15-30 of the most enjoyable minutes of the entire iPPV. Add the heart and soul of who is now a well-known Kyle O’Reilly. In addition, the hunt is finally back on for The American Wolves, who at one point in time stood alone as the most dominant tag-team in Ring of Honor. These suggestions probably do this match enough justice. What has been noted as depleting tag-team division in ROH, receives its largest infusion in recent memory. If there is any truth regarding the mal-nourished state of the tag division in Ring of Honor at present time, this is bound to not only be refreshing, but the potential for it to nourish the division is also there. Similar to the feeling behind the Generico, Steen reengagement, the past becomes the present and stale becomes fresh. Show stealing?

Hardy knows he is about to be eaten alive by the Ring of Honor New York City crowd, but that basic idea is partially what makes this match-up incredibly worth seeing and incredibly valuable to the delivery of Final Battle 2012 as a whole. New York City’s admiration for Cole, and furthermore the ROH faithfull’s admiration for Cole has soared since he pinned Davey Richards at the 10th Anniversary show inside New York’s Hammerstein Ballroom. Those who have followed ROH all year long are most likely on the Cole band-wagon to some level, and the desire for his success in the company is overwhelmingly translucent right now. What is also translucent is the lack of appreciation for Matt Hardy’s return to a Ring of Honor Wrestling Ring. Despite all of the negative connotation placed on-top of this contest directly upon the announcement of it, more often than not fans find a way to appreciate high-end performance, and there is no doubting that both Hardy and Cole can provide that in awe-inspiring fashion Speaking exclusively for myself, I look forward to what could take place between these two on an “ROH level.”

The second most interesting outcome of the night is most likely this one, next to the main event of course. There is one question that will remain as the one and only question that can come out of looking at this match prior to it going down. Will SCUM retain the tag-team titles prior to Steen defending his World Title? A potential outcome that could bleed into the main event, literally, is the only thing in question here. After all who would dare to question whether these three teams can give us one of the better tag-team contests in Ring of Honor this year? Even though it is no secret that the ROH tag-team division has been stronger in years past, there is substance in saying The Briscoe Brothers and Coleman and Alexander are the most worthy opponents for Jacobs and Corino. Therefore, not only is there the need for this match to take place, but there is a desire for it to take place as well.

Their feud inside Ring of Honors walls commenced at Final Battle 2009 and a final battle finally has potentially at Final Battle 2012. Hype does not describe this match whatsoever. Build-up barely describes it either. What does describe it is massive. I honestly leave it at that. If you have no idea about any of the history between Steen and Generico as enemies, inside and outside of Ring of Honor, looking at the opening sentence of this paragraph probably seems outright ridiculous. However, prepare to be told off if you have those thoughts. Very rarely do things feel like they happen at the perfect time in this industry, and I am almost certain that everyone, on both sides of the guardrail feel that way. The same cannot be said for this year’s Final Battle 2012 Main Event. El Generico has not been seen in ROH after back to back losses against Steen and Jacobs at Showdown in the Sun during Wrestlemania Weekend. His absence may have been one of the more bitter pills ROH fans have ever swallowed but a guaranteed buffet table is what Final Battle 2012’s LADDER WAR 4 seems like to most. This will be a spectacle. As I once again allude to the beginning of this entre piece, if there is any indication of what these two have given to those that put their butt’s in the seats at venues and order iPPV’s month in month out; you can confidently leave your expectations at the “Order Now” button or at the door if your just that damn lucky!