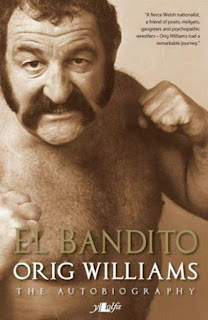 I've decided [for what may or may not be a one off occasion] that I am going to write this review in first person. I bought El Bandito with zero knowledge of Orig Williams or his professional wrestling background as a performer or promoter let alone his career as a footballer [soccer player]. Spotting a quote from Dave “Fit” Finlay on the back of the book combined with the reasonable price I decided to purchase Orig's book and hope it was a tolerable read.

What I found printed between the covers was more than I could have ever asked for, from the moment I started reading I did not want to put the book down. Personally, I have less interest in football than I do in the latest TMZ 'news' coverage, much to my surprise his tales of being both a player and a manager kept me interested with the antics he got up to. Then El Bandito grabbed my attention even harder as he speaks of his time on the legitimate traveling wrestling booths around England and Wales, which led to his first tour overseas to Pakistan. The chaos he wrote of didn't let me lose interest for a second. The next thing I realised I was reading stories of him promoting his own shows, training young aspiring wrestlers both male and female. I found myself fascinated by the troubles he encountered from priests and other large hall owners mixed with the business ways of the Irish which he recalled in great detail, especially when the women wrestlers were involved. All the time I was engulfed in his story something about the way it was told, the way it was written just captures your imagination, drawing you into Orig's world almost as if he is sitting there telling you the stories in person from the Welsh Football Association, to his many contacts across the world or just simply speaking of his patriotism for his beloved Wales.

When I had finished reading El Bandito: The Story of Orig Williams, my first thought was, I have to write this review in first person to truly express how much this book about a wrestler who never made it to the big time, had his own promotion with a television program on a channel that broadcast only in the language of Wales, a man I had never heard of, entertained me for the entire time of reading. My second thought was, I really don't know much more about Orig Williams now I've read his autobiography. I realised there had been hardly any dates through-out the book and in a lot of cases you could tell that huge parts of time and explanations for how he got to where he was and other background workings of the business hadn't been told, but during the book you're having so much fun you don't want to stop to think about it. I definitely was left feeling I'd read more of a memoir [as in a recount of certain events] rather than a full autobiography. Having said that though, if I were to go back and had the choice between buying or not buying the book, I would still choose to buy it again.