HIAC: Death of a Gimmick By Shaun Nichols 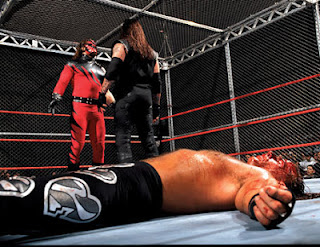 Above: Kane & The Undertaker squaring off as Shawn Michaels lays battered & bloodied in the first Hell in A Cell match back at WWF Badd Blood in October 1997

Hell In A Cell as been one of the better creations in the WWE over the last 15 years. The concept made its debut at the Badd Blood PPV in October 1997 when Shawn Michaels defeated The Undertaker to become the number 1 contender to the WWF Title.

The match was a fantastic one, with two great performances and a match which was filled with lots of drama. It was a tremendous success and was a definitely a step up from the old school cage matches we had seen before. The concept worked because it was billed as The Undertaker's match of choice and he was going for revenge against Shawn, the man who had accidently cost him the WWF title at Summerslam.

The second HIAC match was actually a tag match on Raw in June 1998 which ended in a no contest. But thankfully less than two weeks later was the match which made the HIAC a legendary gimmick. The Undertaker's victory over Mankind which featured two infamous spots which saw Mankind crashing through the commentary table right at the start and then later on was chokeslammed through the structure's roof. The match saw Mankind become a genuine main eventer and the HIAC had secured its status as the place where feuds should come to their conclusion.

The following few outings came nowhere near the quality, The Undertaker defeated Big Bossman in a decidedly average affair at Wrestlemania 15. However the following year we got the third HIAC classic. At the No Way Out 2000 PPV, Triple H defeated Cactus Jack to retain the WWF title in a match which saw Cactus Jack have to retire. Sadly he was back a few weeks later as a part of Wrestlemania 16's main event. Triple H's success against Cactus Jack helped him solidify his ability to be a credible top draw with an ability to produce strong and violent matches.

At this point we see a change of strategy from the company, it should be clear that HIAC works best when you have two main eventers involved in a strong and extended feud and the HIAC would be the final and fitting chapter. It's next outing was at the Armageddon 2000 PPV where Kurt Angle defended the title in a six way, despite the talent involved which included Triple H, The Rock, Steve Austin and The Undertaker. The main spot was Rikishi taking a fall off the roof. Although it was a good match it simply lacked the drama of the earlier outings.

Following HIAC matches of Triple H defeating Chris Jericho at Judgement Day 2002 and another Triple H win this time over Kevin Nash at Bad Blood 2003 were pretty underwhelming due to different factors. The Triple H vs. Chris Jericho lacked the intensity of the great feuds and wasn't helped by the fact that Jericho was booked in such a way that no-one saw him as any kind of threat to Triple H. As for the Kevin Nash feud, it was clear that Nash had his limitations that could not be hidden.

Between those average encounters was arguably my favourite HIAC match between Brock Lesnar and The Undertaker for the WWF title. Although this wasn't the finale of a long and violent feud it told a simple and straight forward story. Lesnar was portrayed as unbeatable and went over all the top stars but here was a new challenge. Having to defend the title against The Undertaker, in a match that the challenger was considered unbeatable in, as the WWF did a nice job in re-writing the history so the fans forgot he actually lost the first HIAC match.

Lesnar was successful and was fully cemented as a main eventer for the rest of his first WWF run. Over the next few years we typically had one HIAC match a year. Some matches had more reason for taking place than others and it was the matches with the long and careful build that were to be the most successful and more memorable matches. The longest HIAC match took place at Badd Blood 2004 between former partners Triple H and Shawn Michaels which went over 45 minutes with the set up being that both men wanted to beat Chris Benoit for the World Heavyweight title and therefore kept interfering in one another matches so they met here to settle things once and for all.

Batista got a major win at Vengeance 2005 over Triple H, this again benefitted from a decent storyline. Batista had defeated his former Evolution partner at Wrestlemania and had gone onto successfully retain at Backlash. Frustrated Triple H had attacked Batista on Raw and challenged him to a HIAC match where he had enjoyed great success but also that Batista had so far not wrestled in a HIAC match. Putting Batista over gave him three straight victories over Triple H including wins at the biggest show of the year and also in the HIAC demonic structure.

Things started to go arguably wrong with the DX winning a match against Big Show, Vince & Shane McMahon where the big spot was DX forcing Vince's face into the Big Show's backside. Comedy had entered HIAC and at least in my view it wasn't particularly welcome. The Undertaker had two further HIAC matches against Batista and Edge in 2007 and 2008 which were reasonable but didn't leave the same impression as the great HIAC matches of earlier years.

From 2009 we have had the Hell In A Cell PPV which featured three matches all fought in the structure. The problem was now we had a PPV and therefore they had to book matches in the cell rather the match needed or should be put in the cage. Feuds were put in the cell halfway through the programmes when common sense should dictate that HIAC works best as the final installment.

At the 2009 show, the card actually opened with The Undertaker beating CM Punk in less than 15 minutes. DX beat The Legacy (Cody Rhodes & Ted Dibiase) and Randy Orton defeated John Cena. The HIAC was only a stepping stone in the Cena vs. Orton feud that dominated the second half of 2009 and at the next show they wrestled a 60 minute match and it was like their HIAC match counted for nothing.

I don't think any of those matches were particularly memorable and that's really been the story at least at those HIAC matches that have featured at the same titled PPV. In 2010 there were two HIAC matches which saw Randy Orton beating Sheamus in an entertaining affair and Kane beating The Undertaker in arguably the worst HIAC match out of the 26 that as actually occurred.

In 2011 it became clear that we had long since seen the end of blood in these matches, it also became apparent that making matches to take place HIAC without the proper timing is a underwhelming experience. There is little doubt that having HIAC as a PPV draw used to be a tremendous success but over time the concept as been over played to the point where it no longer as that special feeling attached to it. The lack of blood I think as also watered down the effectiveness of the HIAC match.

The Undertaker's victory over Triple H at this year's Wrestlemania was a rare example of a match which did deliver. But it did have the advantages of a long build up and the storyline that this match was the end of an era. They had Shawn Michaels as a part of the story with the intriguing question of if Shawn would call it straight down the middle or not. They also could get away with flaunting the no blood rule which I don't think any of the current roster would be able to do so at least not for the foreseeable future.

Looking back at the history of Hell In A Cell matches shows that it did deliver a lot of really good matches but not many in the last few years. So it might be time to put away the cell for a while or take a step back to realise what made the legendary HIAC matches so special. And it wasn't because it's October's PPV so we better put a couple of matches into the cage with no rhyme or reason. Which is what we have seen over the last four years.
Posted by WrestleFigsUK at 11:04