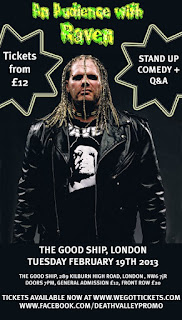 Former WWE/TNA/ECW legend Raven will be performing a night of stand up comedy in London on the 19th February 2013. After spending much of 2012 supporting comedian Bob Levy across the US, this will be the first time Raven performs his comedy act abroad. The show will be combine traditional stand up comedy with numerous stories from his many years on the road with the worlds biggest wrestling promotions. He will hope to follow in the footsteps of Mick Foley, Chris Jericho and William Regal, all of whom have performed successful spoken word events in the UK recently.