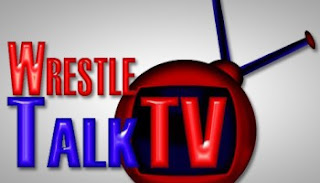 I shall shoot straight on this, I never watched the internet version of this show so my opinion is based purely upon the TV product, as readers of my column will know I am hugely passionate about wrestling and in particular about UK indy wrestling but when I watch this show I get annoyed, angry and even bored!

The show itself is incredibly poorly produced, you have the main presenter Joel Ross who is much more interested in talking about himself then he is putting over the product he is supposedly talking about, I thought that the art of selling is something those in the business are expert at! Patrick Lennon the journalist on the show just talks in such a deadpan manner exuding absolutely zero enthusiasm about the subject matter and whenever a topic is discussed or more in particular certain individuals he just turns into one of those annoying nodding dogs that you sometimes see in the back of cars and just agrees with everything everybody says and he also sucks up yep really sucks up big time to the guests.
Francesca Woods has to be the most pointless person on British Television every single week she says hello and then that is it her part is over and done with apart from the occasional involvement in the yes yes yes no no no segment which they do.

The theme of the show appears to be to have the odd comedy and oddball spot which is fair enough in terms of entertaining us, explaining the meaning of certain wrestling terms which again is fair enough and then the odd bit of news which is usually old news given that the show is clearly shot a few weeks before it is actually aired making that segment totally null and void and then interviews with guests and incidentally the Lennon interview with Hogan could make television history as it appears that we are going to see snippets of this interview on each show between now and probably 2014 by which time the content of the interview will be even more out of date than the other stuff which they put on the show!

But what really is so wrong with this show and this is the important bit is this:-

Here we have an eagerly awaited opportunity for UK indy wrestling which is thriving in so many respects to have a national television outlet for putting over our product for the fantastic product which it so often is, up and down the country week after week shows are put on which are so professionally put together, individual matches witnessed match or often exceed the quality of those on WWE and TNA, the development of characters and the scripting of storylines which then run and are well executed again are typically much more exciting and written out to a superior level (e.g. we actually get to see the conclusion of the story as opposed to it being suddenly abandoned in mid flow without explanation sorry WWE and TNA but you both do this frequently!).

On this show the opportunity exists within that hour for discussion to take place about the scene, for references to be made about how certain storylines are progressing, for interviews to take place with wrestlers involved so that they get the opportunity to demonstrate their character on television, for edited highlights from certain shows to be shown (I spoke to one of the most prominent indy show promoters this morning who said he was happy for them to use any of his 60+hours of HD quality footage).

I have watched in the past fortnight three absolutely superb you tube videos which exist to build up interest in feuds and matches, they are brilliantly done and if aired on this program would really help a new audience to buy into what the rest of us already know and love, let us remember about the timing of this program, it follows on directly from TNA Impact which is watched by large numbers, this Wrestletalk show could if executed properly be used to attract some of those mainstream fans into the indy scene, these people are clearly already wrestling fans and they are probably quite unaware of the indy scene and how good it can be so show these videos, show edited highlights, have wrestlers appearing in character.

I would also have a promoter on each week so that he has the opportunity to detail what his product is about and I would have a different promoter on each show so that no bias is shown, the same promoter I referenced earlier was not sure about this idea as he said that promoters are not actors but I said to him you do not need to be an actor just speak from the heart, if promoters have gone as far down the line of creating a promotion with all of the work which that involves and money then very clearly they are extremely passionate about the business so just speak from the heart it would make for great television as well as being extremely insightful into the indy scene.

They should also have a segment trailing the forthcoming shows around the UK, it needs to tie in logically if they spend a chunk of the show how I would like them to then if you have sold the product to a potential new audience you then need to inform them of where and when these events happen.

If this was done properly it could be the key factor in turning our business on its head in a really positive way.

Why for example are they bothering interviewing Leroy Kincaide who is primarily an actor and who has not wrestled for a year or so and who by his own admission only wrestles when he feels like it yet they interview him and push him for the TNA boot camp, this is so disrespectful to all of those guys and girls out there who every single week are working up and down the country doing shows putting on great wrestling for us, THEY are they ones who should be getting a televised push NOT Leroy Kincaide!!!!

We could have chats with people who work within the business and how they got into it, what does a show day mean for them, why did promoters set up their promotion, why did a wrestler get into the business, there could and indeed should be recognition for the wrestling schools up and down the country, features on them etc.

What really made me mad though even more than the above was during the Leroy Kincaide interview they made a point about him doing this massive show in front of 30 people strongly hinting that his talents were wasted in the UK as nobody watches it!! Also in the same interview they openly said that American wrestling was much better than UK wrestling because whilst we have the pretty wrestlers who can do nice moves we do not possess wrestlers with character, wrestlers who can speak, we do not run storylines and garbage such as this.

Apart from all of that being blatantly wrong they are not only failing to sell the UK indy product they are openly mocking it and this is happening on the highest profile show which our product currently has in the UK, I am worried that people who might go to our shows but to date have not been to any, they listen to this crap and believe it as they do not know any better and we have lost a potential fan for good.

That is the most infuriating part!

I do not know how this can be turned around, the show which is heavily influenced by Alex Shane very clearly has its own agenda, it appears to be a case of they will pander to each other’s ego’s, they will talk to and sell for people who are within their clique but they have no intention at all of promoting the UK product in a successful and fair manner, I would absolutely love them to prove me totally wrong as my interest and my passion is UK Indy wrestling and my only motive here is to get that promoted as well as possible so I’d be delighted for this article to look dated after their next show but how much faith do I have in that happening…..

If you enjoyed this article or wish to debate it further please contact me on @Shadetheshoot.
Posted by WrestleFigsUK at 06:47