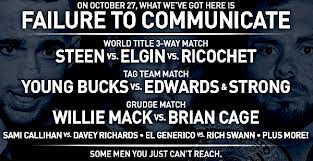 Pro Wrestling Guerrilla returns to the American Legion Hall in sunny Reseda, Ca. October 27th, 2012 for "Failure to Communicate". After an almost two month lay off, FTC is the follow up to "Battle of Los Angeles 2012" a two day extravaganza that took the indy wrestling world by storm.

Packed to the rafters with an abundance of indy wrestling talent from all over North America, this card has a little something for pretty much every type of wrestling fan.

PWG tag champs Super Smash Brothers will not be on the card for the second straight show due to personal commitments. BOLA '12 champ Adam Cole decided to not take advantage of his title shot that came with his BOLA victory.

In spite of these three great talents not participating in the show, PWG has put together another superb card that no doubt will once again have the Indy world in an uproar.

Three very unique styles come together for this incredible three - way match. You have Steen's mix of brawling and speedy big man skill set. You have Ricochet's acrobatic aerial assault style. You have "Unbreakable" Elgin's power, explosion and strength. This match allows for so many possibilities.

The main theme of this match is Payback. Steen was upset by Ricochet in the 1st round of BOLA. Meanwhile Elgin defeated Ricochet in the semi - finals of the event. throw in the ROH connection between Steen and Elgin and I look for this match to be as brutal as possible which caters to Elgin, with a nice mix of aerial spots from Ricochet and yes, even Steen.

This match I find interesting for a couple reasons. Edwards and Strong, two veterans who in this match represent wrestling that was prevalent throughout much of the last decade versus the Bucks, representing what is NOW in Indy wrestling. Edwards reality based sort of Japanese style combining with Strong's innovative technical style provide a nice contrast to The Bucks sinister high flying, win at all cost style. Personally I look to this battle to steal the show.

At Threemendous 3, Brian Cage channeled his inner Booker T while cutting a promo on both Steen and Mack, who battled that night. The high jinks and run - ins between the three have continued ever since. Recently Willie Mack's father, affectionately known as "Foot's" passed away, so no doubt he will still be wrestling with a heavy heart. I anticipate Willie coming out and giving the performance of his life as a tribute to his father. Cage meanwhile will no doubt look to "get his shit in" with the intention of taking another step toward the PWG title. Considering those involved, I think we will be provided with a few moments that will no doubt make the "hype' video for this show.

I think its safe to say that this match will be an all out war. Non stop destruction. In recent PWG appearances the human battle ram Callihan has gotten way over with the SoCal fans. With his hard hitting and no fear style, Callahan is pitted against someone who just might be the perfect candidate to catapult Sami up another notch. With his ultra-realism, high intensity, shoot style wrestling Richards I feel is a perfect fit vs Sami. Say what you want about Richards, but he has shown he is not afraid of giving shots to up and coming young wrestlers.

I mentioned I thought Edwards/Strong vs The Bucks would steal the show at FTC, that said this match also has me excited. If you don't follow Dragon Gate/Evolve you might not be familiar with Rich Swann. if that is the case, stop reading this and go on youtube and type in Rich Swann vs AR Fox..waiting.......cracking knuckles.......ok, your back? Swann is the consumate DG/Evolve talent. Cruiserweight size, acrobatic and ultra talented. What separates Swann from other DG/Evolve wrestlers is his charisma. The guy can work a crowd, not only with his wrestling but with his confidence and humor. Generico meanwhile, is Mr. Charisma! Whether he's working a 50 person show or a 500 person show, Generico brings his A game. He has been known to bring the best out of young talented wrestlers and I feel this will be no different. Don't be suprised if when you see the DVD to this show, you hear the rabid PWG crowd begging Swann to "Please come back!!!" after this match.

Also on the card B-Boy and Famous B will be taking on SoCal hipster tag team The Rockness Monsters and Joey Ryan will be facing Ryan Taylor.

"Failure To Communicate" looks to be another classic PWG production, I cannot wait!!!!