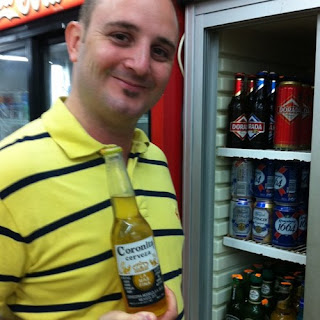 I have wondered about this question for some time, if I had the wherewithal, the time and financial opportunity in theory it is something which I would love to do but like the vast majority of us I think about it, I dream about it but I do not actually do it.

(Below: This is the finish to a match from SWE's Speed King Show as 'The Man That Gravity Forgot' PAC faced off against Kris Travis)

I spoke to somebody who has done it and in my book having experienced a number of his events has done it extremely well, Ben Auld who runs Southside Wrestling which is a promotion for those of you who are not aware that runs shows in St Neots, Stevenage and Nottingham.

The main emphasis of the shows is a mixture of high quality wrestling matches which utilise a combination of the best UK talent and imports but also integrates into that some extremely promising young wrestlers coming out of the outstanding House Of Pain Wrestling School in Nottingham which has the reputation of being one of the best if not the best wrestling school in the UK, in addition to the matches you get comedy from the hilarious Mad Man Manson, some outstanding tag team action, there are themed events such as their annual Speed King Tournament which is all about if you like x division type of wrestlers, the small quick guys and they also have outstanding storylines running which currently have two fantastic themes running, one is the longest running feud in UK wrestling history and that is two masked men Ego Dragon and El Ligero who have had a series of increasingly hard hitting matches and at St Neots on 28 October the feud will end and the loser shall be demasked in a no ropes no rules match.

(Below: a great promo video for the match mentioned above - Ego Dragon vs. El Ligero)

In addition to that an outstanding invasion angle has been running with the aforementioned House Of Pain Wrestlers invading Southside shows with the story being that House Of Pain have long been the only wrestling company in Nottingham now Southside is invading their territory and House Of Pain want it back, House Of Pain (HOP) currently hold the Southside Heavyweight title and the tag title and plan to move in on the Speed King title next, the feud is currently due to conclude in Nottingham on November 30 and is main evented by a last man standing match between Stixx and Mark Haskins, these two have already held what I consider to be the best singles match I have ever witnessed in person so this is something not to be missed.

So that is a bit of background, the show in St Neots on 28 October is their 2nd anniversary show so they have come a long way fast so I asked Ben Auld some questions in relation to Southside Wrestling Entertainment (SWE) and both the questions and Ben’s responses are below, I hope and I think that you will find it fascinating reading.

What made you decide to form an indy company?

I decided to form my own promotion as I was travelling all over the country to watch shows and realised there was a big gap here.

What were your main concerns before you started building it about what could go wrong?

I guess my biggest worries were that it might not work in so many ways , financial , quality wise.

What were your biggest hurdles to making it happen?

I don't think there were any particular hurdles , quite a lot of small ones. I guess one of the most difficult things is dealing with international talent with regards to organising everything to make sure they arrive at show.

Since you have set SWE up has it gone how you hoped?

It has definitely gone to plan , I had a plan of stages I wanted at at certain times and have achieved them. Everything that we have made financially has been invested back into Southside , we have got to the point where we have grown the shows slowly in regards to talent , building up trust with the fans but now have almost all equipment we need , lots of merch , belts , website etc etc so now we can take the next step and invest even more into the shows.

What have been the biggest benefit to you personally about running the promotion?

Biggest benefit - I guess just the killer buzz of when a show goes very well !

What has been the worst part since you have been up and running about running the promotion?

Worst part is easily the time and sacrifices that I have given.

SWE is quite unique to my knowledge in the UK in terms of being a small company which actually runs shows from fairly diverse geographical locations, this has both positives and negatives from I guess, it builds your fan base across the southern and central parts of England but the drawback to the fan who is unable to travel is because you run really good consistent storylines you can miss the next part or even the conclusion of a story you’ve been following carefully, do you consider this an issue or do the benefits outweigh the potential downsides?

It certainly takes a lot more thought running storylines across different towns , it helps with the internet but if you do it right on show day and tell the right story then it can work . It's just a more complex way of doing it.

The current feud with the House Of Pain in my book has been expertly done, the most recent event in Nottingham was as good a show as I’ve ever been to from any promotion of any size, everything was clearly planned out so carefully and performed so expertly, do you have any concerns given the amount of heat and promotion on the social media being generated from this feud that once it has concluded the aftermath may feel quite flat in contrast e.g. less traffic on social media with no feuding to be done on there, lower crowds at Nottingham without the House Of Pain contingent present?

Well if the SWE v HOP fued does die out then it's my challenge to grip the fans with something new , I have lots of plans for next year and am really excited about them. I'm at the point now that fans keep coming back , they know we are going to put on a great show , with great talent and do things that will entertain on the night.

Along with others I heard on The Indy Corner podcast recently the interview with Kris Travis, whilst it was an entertaining listen and apparently a typical Travis interview he was pretty scathing about Southside and you personally as a businessman although he did qualify that by stating that he holds a high opinion of you in your personal life, he strongly hinted that you were up to your neck in it which I could only interpret as being you were struggling financially with Southside, would you like to put your side to this story to enable the public to hear both sides and also to reassure us SWE fans that all is well?

No I won't comment on Kris Travis , I can confirm that Southside is very strong , people love to talk rumours in this business but there is not a single fact why anyone could suggest that we are struggling financially. How many other companies can go into a bowling green and transform it like us . Everyone is always paid on time , in fact often early.

Would you consider merging Southside with other midlands promotions if it was felt that it would benefit the UK indy scene if there were less indy promotions but more good ones?

No I would never merge Southside at the end of the day I have worked far too hard to share it, it’s my baby and it’s staying that way!

Do you subscribe to the notion of creating a regulatory system which all promoters new and current have to register with and had your H&S procedures independently assessed then assuming you pass! Your name goes onto a register of approved promoters, this would be to protect the wrestlers from appearing for a dodgy promoter who takes risks with their health?

I could talk for ages about all of these poor companies out there - somebody is going to get really hurt.Everything about them is hurting British Wrestling but the fact is that there really isn’t a way to govern them - I wish that there was.

What is the best match in your opinion that you have put on?

I really couldn’t tell you which the best match I’ve put on is far too many, I guess I could say the Ego Dragon/El Ligero is my favourite thing that I’ve done - proud of what the 3 of us have achieved.

What is your dream match that you would like to put on if you could use any current wrestler from any promotion including WWE/TNA?

Dream match wow - Dolph Ziggler vs. Austin Aries at the moment but I could name 100 if asked lol(just to mention that I came very close to booking the dream match for me PAC vs. Davey Richards)

What would your dream match be if you could use any wrestler including retired/deceased?

So many of my favourites are dead Curt Henning, Eddie, Benoit

Who is your favourite big name in wrestling that you’ve met and why?

Where do you see Southside in five years time?

Where do you see UK indy wrestling scene in general in five years time?

Not sure about the British scene it really all depends upon TV.

Can I thank Ben Auld for this interview please, like so many of our other promoters Ben besides running and promoting Southside also holds down a full time job and is a family man,he makes big sacrifices of his time to enable us to go along and have a fantastic time and I for one am very grateful to him and other promoters for doing that.

I would like to finish off by highly recommending taking in a Southside show to anybody out there who enjoys indy wrestling events, you will be blown away trust me!

For more details on forthcoming Southside events you can contact them on the following social media outlets:-

You can follow me on @Shadetheshoot.
Posted by WrestleFigsUK at 13:27