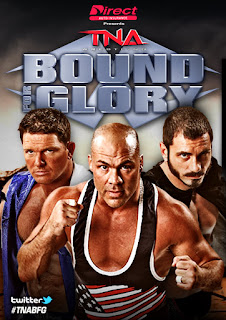 TNA's Bound For Glory PPV is their biggest show of the year, the TNA version of Wrestlemania. What it was clear watching the show is that there is very little buzz or excitement about the promotion. It was a decent PPV offering but it did not come across as anything really special, it did not have a fantastic build up. It was basically just another show in which for the second time this year was built up to Hulk Hogan having a match and then finding out that he couldn't wrestle. But let's start at the beginning with Rob Van Dam winning the X-Division title from Zema Ion. RVD was one of the most over wrestlers on the show that tells me that a decent percentage of the crowd were ECW/WCW fans from the late 1990's. RVD has not been a part of the X-Division at any point of his TNA career but was given the title shot because TNA couldn't find a different opponent for Ion and they also wanted Van Dam on the show. Giving RVD the title clearly indicates that TNA at the moment really do not care about the X-Division and it will probably be a minor part of TNA in the next few months.

Up next was Samoa Joe successfully defending the TV title against his former tag team partner Magnus, this was a pretty good match because Joe had his working shoes on so it was probably in the *** range. The last couple of minutes was actually very good with the reversals and Magnus avoiding Joe's attempts to lock in the choke. However what became evident to me is that Magnus who has a decent look and is a good talker, really missed the chance to go out and make a strong impression. He has improved a lot in the last few years but here the match was all about Samoa Joe.

Up next was the battle of Beer Money which for most of 2012 was expected to be the show's main event. Bobby Roode and James Storm still had a really good match but the fans didn't care as much as you would think. The fans cared more about RVD then watching James Storm finally get his revenge against his former tag team partner. The feud seems to have come to an end as Storm used a beer bottle to help him get the win which was the same tactic Roode used to beat Storm for the TNA title nearly a year earlier. I also have no idea why they had King Mo out there, he wasn't involved in the finish and he doesn't look to be heading into a programme with either Storm or Roode. He just look awkward and out of place, he wasn't helped by the fact the fans didn't know who he is.

Worst match of the show was Joey Ryan winning a TNA contract by defeating Al Snow, Snow wrestled in gear that should only be worn on a low budget indy show. Did he not realise this was his employers biggest show of the year? Anyway the story was that Ryan was hopelessly outclassed by an agent but got the win thanks to the returning Matt Morgan. Why should we care about a wrestler who is booked to be so bad that he can't be competitive by someone who isn't even an active wrestler. I have no interest in seeing Ryan, Snow or Morgan anytime soon.

One of the most anticipated matches were the WTTCOTW (Daniels & Kazarian) defending against Kurt & AJ and the team of Chavo & Hernandez. This started out pretty slowly and then became excellent when Kurt Angle got the hot tag and went wild on the other two teams. Match carried on really well from there with lots of big spots including Kaz nearly killing himself with a huracanrana to the outside on Hernandez. Chavo got the win on Daniels after the frog splash, fans did not react that big to the title change but that might be because although Chavo & Hernandez are a decent team they are not at the same level as the other two teams. Hopefully Daniels & Kazarian get the belts back pretty soon as their tag team name only works when they are the champs. Chavo mentioned Eddie in his post match interview which the fans liked.

Tara won the Knockouts title from Brooke Tessmacher in a match which was ok and only went about 6 minutes. She then made out with her Hollywood boyfriend which was revealed to be someone called Jesse who was in Big Brother. Nobody cared.

Speaking of something that TNA fans don't really care about it was time for Aces & Eights to go up against Sting & Bubba. Fans expected Bubba to turn on Sting, the problem with the Aces & Eights is that we don't know who they are and the feud as basically not moved in the last two months. We really need to see this feud start developing quickly, will it happen here? The Aces & Eights team are represented by Luke Gallows & Mike Knox although they aren't actually revealed. Running interference was Wes Brisco and making the save was Joe Park who finally weeks after been kidnapped broke his handcuffs so we assume is now a free man. A second masked man ran in and gave a Bubba a spinebuster through a table for the win. This allows Aces & Eights access to the Impact Zone, how exciting is that? Before then though we got to see Hulk Hogan hobble his way to the ring. The masked men then very nicely ran into his fist and then acted dead, this left the mystery man alone with Hogan, Sting & Bubba. They than unmasked him to reveal Devon Dudley who despite facing a 3 on 1 situation started laughing, our babyface heroes looked shocked and let him leave as Devon said 'It was me all along'. Can't see Devon as the leader, surely Eric Bischoff will be the final reveal because TNA obviously thinks we need to see another tedious Hogan vs Bischoff feud. Fans again that did not react to any of the Aces & Eights antics and the problem is that this is going to be the focal point to TNA for a long time to come.

What the fans did care about was the main event which saw Austin Aries defending the TNA title against the company's biggest star and babyface Jeff Hardy. The major problem with that is the crowd in Phoenix was very pro-Aries and Jeff Hardy found himself being booed on a numerous occasions despite Mike Tenay trying to claim otherwise. This was a very good main event and was pretty close to being in the **** range, Hardy became the new champion after hitting Aries with the twist of fate followed by a senton for the clean pin. Fans did react positively to that but they saw a good match and a title change.

The show on it's own was a thumbs up show it had three very good matches which were the main event, the three way tag team match and the Bobby Roode vs James Storm brawl. The only thing which was bad was the Joey Ryan vs Al Snow match and that can be blamed on how the match was laid out which was terrible. The big issue for TNA is that the biggest feud in the company is not clicking with their audience and they do not seem to be aware of the fact.

Back at the Impact Zone, Jeff Hardy should not be met by the boos he encountered in Phoenix and a re-match with Austin Aries should deliver another strong match. It'll be interesting to see just how quickly Jeff signs a new contract now he's been giving the title.