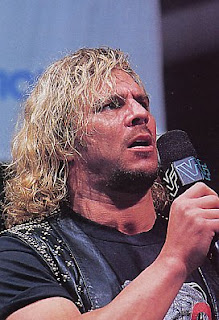 Yes, it’s been 15 years since the former ‘Flyin’ Brian Pillman passed away on the night of the Badd Blood PPV.

Pillman had a troubled life; he went through quite a bit at a young age. Pillman developed multiple throat polyps as a child and had over 40 operations before the age of three. After a stint in American football, Pillman began to train as a wrestler in November 1986 in Calgary under Stu Hart & his sons.

With being trained by the Harts his first foray in wrestling was with the Stampede promotion right there in Calgary.

In 1989 however, Pillman returned to the United States where he joined the ranks of the NWA which of course went on to be WCW.

His first taste of gold in the promotion was alongside Tom ‘Z-Man’ Zenk as they won the US tag team titles which they held between February & May 1990. Pillman would go on to feud with Barry Windham and would lose a ‘loser leaves WCW’ match but Pillman came back under the guise of the Yellow Dog which was a gimmick used in Florida some years before. Pillman would go on to be re-instated and would go on to hold the short lived WCW Light-Heavyweight title feuding with the likes of Brad Armstrong, Jushin ‘Thunder’ Liger, Richard Morton & Scotty (Raven) Flamingo. One of Pillman’s notable matches at this time was his match with Liger at Super Brawl II.

In the fall of 1992, Pillman turned heel as he was frustrated that Brad Armstrong got injured and Pillman would be unable to challenge for the aforementioned light heavyweight title at Clash of The Champions. Pillman would go onto form a team with his former nemesis Windham, the two were unable to take the straps off then champions Shane Douglas & Ricky Steamboat and in the spring of 93, Windham went after the WCW title and Pillman was left to start again.

As the old saying goes, every cloud has a silver lining, following the split from Windham, Pillman would go on to team with ‘Stunning’ Steve Austin and form The Hollywood Blondes. This for me was up to that point the most I had enjoyed Pillman, already set in his heel ways and along with Austin who had only been in the business himself about 4 years himself at this point the two were a tremendous tandem. In March, The Blondes did what Pillman & Windham couldn’t; they dethroned Douglas & Steamboat for the tag team straps. After a number of rematches, The Blondes then got embroiled in a feud with the legendary Four Horsemen. This all started with The Blondes appearing on the sketch show of WCW at the time ‘A Flair For The Gold’ in which Flair who wanted to do nothing but put The Blondes over was on the receiving end of a barrage of insults along with Flair’s right hand man Arn Anderson. This was hilarious and the video is posted below.

The two teams would face each other at COTC XXIII on June 13th 1993. It was a 2/3 falls match which the Horsemen won but one of the falls was a DQ (due to interference from Windham) so the titles did not change hands. However, by the time the next COTC rolled around, Pillman was injured and Austin teamed with Lord Steven Regal to defend the titles against the Horsemen (this time Anderson & Paul Roma).In what a lot of fans at the time, myself included, were left scratching their heads, WCW split The Blondes up, a lot of people said this was because they were getting just too popular with the fans, and if this is the reason, then it’s terrible. Pillman faced and lost to Austin at COTC XXV in November of 93.

Pillman, a singles wrestler once again would challenge WCW TV champion Regal for that title and he in fact wrestled him to a 15 minute time limit draw at the Spring Stampede 94 PPV (Please, if you can, check this PPV out, it was excellent).

Also around this part of a deal with ECW, Pillman ventured to Philadelphia to team with Shane Douglas in a loss against Ron Simmons & Too Cold Scorpio.

Pillman returned to WCW in late ’94 and he would eventually go on to be a member of the Four Horsemen along with Flair, Anderson & Canadian Wrestler X. Pillman wrestled in the very first match on the very first Monday Nitro show from The mall of America on September 4th 1995 against Jushin Liger.

At the end of 95 Pillman became the ‘Loose Cannon’ the image he once had as ‘Flyin’ Brian and even Hollywood Blonde Pillman had gone and the new rugged looking Pillman was born and oh boy, wrestling was going to change with Pillman leading the way. Pillman would face Eddy Guerrero at COTC XXXII in January of 96 and the ‘Loose Cannon’ gimmick kicked in as Pillman jumped out the ring and began to pull the jacket off colour commentator Bobby Heenen who was at ringside which him to say out loud “What the fuck are you doing”? Heenen would go on to say he thought it was a fan that was grabbing him.

From there Pillman would go on to get embroiled in a feud with the then booker of WCW Kevin Sullivan, Pillman made it knowledge that Sullivan was the booker and at the Super Brawl VI PPV Pillman would say on air “I respect you booker man” and then leave the ring (this however was cut from the VHS release of the show) so the ‘strap’ match that was supposed to take place between the two didn’t and Arn Anderson stepped in for Pillman.

Following this show, Pillman was fired by Eric Bischoff who later said it was planned for Pillman to go to ECW and then later return to WCW with legit heat, as we know, this never happened. When Pillman did make it to ECW he was awesome and some of the bits are just great. Pillman after many skits both in and out of the ring was scheduled to face Shane Douglas but on April 15th 1996, Pillman crashed his Hummer into a tree which left him in a coma for a week and one of his injuries was a shattered ankle which the doctors had to fuse together.

Pillman would go on to sign a contract with the WWF in June of 1996; he was the first wrestler to sign a guaranteed contract with the WWF as WCW had been coming in and ‘taking’ WWF talent such as Hall & Nash. Pillman, acted as a commentator while he recovered from his ankle operation, then worked his way back in as a wrestler after attacking a fan on an episode of Shotgun Saturday Night. Pillman would try and get in his former partner Austin’s good books but Austin noticed Pillman was being favourable to his nemesis at ht time Bret Hart and this led to Austin attacking Pillman at a WWF Superstars TV taping in October 96. This would go on to to lead to the infamous ‘Pillman’s got a gun’ angle that took place at his house as Austin went there to tackle Pillman, long story short, Austin finally got to Pillman, the feed got cut off then came back on with Pillman holding a gun to Austin and said “I’m gonna kill that son of a bitch”, Pillman would also say “fuck” on air and as it was live it was unable to be cut from the broadcast. Eventually the WWF & Pillman would apologize for the whole angle.

Pillman would eventually align himself with Bret & Owen Hart, Davey Boy Smith & Jim Neidhart to form a new Hart Foundation who were the anti American’s.

Leading up to his death, Pillman was embroiled in a feud with Goldust in the battle for Marlena.

At the Badd Blood PPV he was scheduled to face Dude Love (Mick Foley) but he never arrived at the arena and he was found dead in his hotel room in Bloomington, Minnesota. He was a mere 35 years old, an autopsy found that a previously undetected heart condition, arteriosclerotic heart disease, had led to his death, the condition had also led to the death of his father, Pillman's use of drugs and alcohol also contributed to his death.

All the above can be found online but this is my views on Pillman now. I got into watching wrestling in 1990 and when I discovered WCW Pillman was one of the wrestlers I liked to watch because of his high flying style. I have stated earlier, I loved his team with Austin as The Hollywood Blondes and I loved the ‘worked-shoot’ stuff he did with Sullivan and of course, I was a BIG ECW mark at the time and his stuff there was tremendous. His WWF career didn’t really take off because I think he never got over the injuries that plagued him his whole career.

He was taken way too soon, R.I.P. Brian.