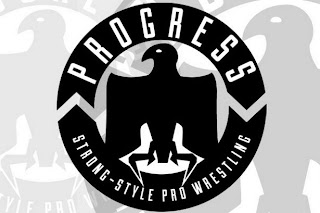 Progress Wrestling’s debut show, Chapter One, was heralded by those that attended it as one of the best wrestling shows that the UK had seen in quite some time. Highlighted by Marty Scurll and Zack Sabre Jr, the sellout crowd also saw excellent performances by Noam Dar, El Ligero, Colt Cabana and the man who claimed their inaugural championship (but don’t call it a nazi staff...), Nathan Cruz.
Wrestling fans are natural pessimists, so I’m sure that there were some ‘keyboard warriors’ wondering if the inclusion of Colt Cabana was the reason for the sell-out. Was it a one-off? Could Progress owners Jim Smallman and Jon Briley capture lightning in a bottle once again and sell out the Garage nightclub in Islington? Would the quality of the matches on the card match or even surpass those on Chapter One?

The answer to all those questions...is yes, yes, yes!

Chapter Two was not only as good as it’s predecessor, is was better.
The venue was sold out, infact they squeezed in even more people it seemed as places where I stood previously that were out of the way were now packed with fans.

The opening match was two debutants for Progress, Stixx against Lion Kid. Now, I have to apologise to Stixx as I’d seen him in IPW twice this year and I didn’t think that he had the personality or skill levels to get over with the Progress crowd. Remember, these aren’t your normal fans who just sit there and don’t interact with the wrestlers. From the word go, the fans chant (sometimes nonsensically) or just call out to get a response. Stixx responded in kind and had a running dialogue with ringsiders who berated him for his hairy chest. He also wrestled a damn fine match with Lion Kid, so my hats off to you Stixx, I was wrong! Lion Kid got the win after a roll-up but I’m sure that we’ll be seeing both these guys in Progress soon as this was a good match.

Match Two was again fought by two debuting wrestlers, Wild Boar and BWC Scarlo champion Mark Andrews. For me, this was the match of the night (and it had some serious competition later on!) as Boar turned a hostile crowd on his side with some brutal moves. Andrews, who played to the crowd and got them to chant for “Draco Malfoy” due to his white hair, had some great high flying moves but looked to be down and out after a pair of package piledrivers. The crowd went nuts when Andrews kicked out, then he suddenly got the win with a roll-up. I wasn’t too crazy in the finish, but both guys deserve credit for their crowd inter-action and Wild Boar especially, who was a cross between Tazz and Samoa Joe, and was really over.

After the bout, former BWC champion Xander Cooper ran in and almost knocked me over (the fiend) on his way to attacking Andrews – who made his own comeback as both guys fought to the back.

Match number three was the man who is facing AJ Styles later in July, Noam Dar and one half of the Bhangra Knights, Darrell Allen. Allen had suffered a serious injury at the last show so it was good to see him back, although he still wears a shoulder brace after popping it out last time! Dar is just amazing. He has so much character and personality it’s scary. And he can also wrestle pretty well too, as can Allen, so they put on a good match here. Again, crowd inter-action was in full effect as Dar pulled his chewing gum out and attempted to force Allen to eat it (that has to be a first in wrestling) and when Dar threw it in the crowd, they threw it straight back at him and hit him! This match also had one of the funniest chants of the night, when Dar was biting Allen as someone near me shouted “That’s not kosher” is reference to Dar’s Jewish background. Progress fans really are a clever and funny bunch! But back to the match, Dar caught Allen with a submission and despite valiant attempts to get out eventually submitted after kicks to the upper chest.

No time for a break, as match four was the culmination of the #BookHavoc campaign. What started out as a simple twitter request for names for the 2nd show, escalated as Jimmy Havoc re-tweeted it to his followers, then video submissions followed by blogs dedicated to reasons to #BookHavoc and then finally a hilarious training video montage complete with rousing soundtrack – this really was a great example of using social media to drive a storyline. Jimmy’s opponent was his former trainer, Danny Garnell. A great storyline twist, which only added to the great dynamic that was already in place. The fact that Jimmy Havoc can wrestle is well known, but the crowd pretended that he couldn’t, and they popped for the arm bar submission attempt like Zack Sabre Jr was about the win the WWE title at Wrestlemania! The match itself was laugh out loud funny.

On paper, it is hard to describe the hilarity of ‘foreigh objects’ (a spoon), the crowd chants (‘spoon the ref’, ‘fork him up Jimmy’) and the match itself was no joke – Danny Garnell playing the perfect straight man to Jimmy’s attempts to not revert to his hard-core tendencies. In the end, Garnell was the winner, but the crowd got what they wanted – Jimmy was also booked for the next show – and then both combatants did an impromptu spooning session with Jim Smallman. You had to be there...

Intermission, thank god, it was stiflingly hot in there – get some air-con ;-)
Next up, the newly formed tag team of The London Riots against the Velocity Vipers. Unfortunately, one half of the Vipers (Alex Esmail) broke his leg in 2 places after landing awkwardly after an exploder so the match wasn’t what it could have been. As it was, London Riots beat the crap out The Vipers much like The Pitbulls in early ECW used to destroy young babyface tag –teams. William Ospreay attempted a 720 (I think, I lost count of how many revolutions he did!) but he missed and one lariat later it was over. The Riots looked awesome and when Alex gets better the stage is set for a return grudge match maybe?

Triple threat match next, as El Ligero, Greg Burridge and RJ Singh battled to get a shot at the champion, Nathan Cruz. With the dynamic of 2 faces and 1 heel, Ligero and Burridge dominated (with some comedy added in for good measure, #ethnicsubmission anyone?) but then Burridge was attacked by Singh’s entourage and the tide turned. Eventually, Ligero pinned Burridge with a roll-up by holding the tights. Would Ligero turn heel to win a title? Time will tell, but this was a great match with non-stop action from start to finish.

Main event time – Nathan Cruz defending his title against Marty Scurll. I can’t wait to see this on DVD as there was so much going on, the match lasted 30 minutes, that I’ve forgotten most of what happened. I do know that they fought in the crowd and up the stairs at one point! Eventually, at 1 fall a piece, El Ligero came in and inadvertently super-kicked Scurll to give Cruz the victory. Or did he? Ligero simply shrugged his shoulders and walked away.

So, Chapter 2 left us with some intriguing storylines and angles to ponder over until the next show in September. Every wrestler on the card put forth a steller match, it’s a clique but they all could have been main events. And I must also give credit to referee, Chris Roberts, who also gets into the fun! Some fans were shouting “Ask him!” during submission spots before the wrestlers did so Chris would address them and tell them that the opponent said ‘no’...subtle but very funny!

If anyone hasn’t been to a Progress show, you really are missing out. This review doesn’t capture the fan inter-action, the comments by Jim Smallman between matches, and the work-rate that these guys produce. It was hot and humid yet Cruz and Scurll went 30 minutes. Good luck seeing a match of that caliber on your WWE or TNA UK tours!

Progress seem to have created something new and unique in wrestling. The combination of great workers and comedy (from all angles, the workers, Jim Smallman and the crowd) has created a unique mixture that transcends from just being ‘pro wrestling’ into a hybrid of wrestling and comedy. Much like Lucha Britannia, they have captured an audience that might not have gone to a UK indy show and the sky really is the limit for the promotion.

Check them out at www.progresswrestling.com as tickets are on sale for chapter 3 right now and they’ve sold out the front already!

Progresss.
Posted by WrestleFigsUK at 14:06