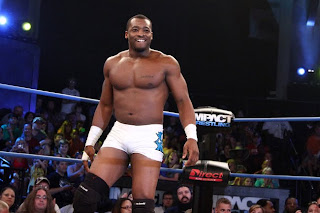 This past Thursday, TNA as a part of their X-Division Championship tournament featured a match between two popular independent wrestlers: Johnny Yuma aka Lars Only of PWG and NWA Hollywood fame and one half of the RockNES Monsters and Kenny King, one half of the current Ring of Honor Tag Team Champions with Rhett Titus as the All Night Express. The match itself was good featuring nice back and forth and some fun high spots. In the end Kenny King came on top and will now take part in TNA's Destination X PPV along with 7 other wrestlers to win the X-Division title. However later that same evening ROH spoke on the Kenny King situation.

In article posted on the company's website and Facebook page, ROH stated that Kenny King's contract with the company had expired 11 days ago and that ROH and King had come to a verbal and hand-shook agreement that extended the contract while King looked at another companies and possible another contract under the agreement he not appeare on television. At the same time, King would still work at ROH while another contract between the two was being written up. However, on Tuesday July 3rd King informed ROH officals that he had a meeting in Orlando with TNA officials on July 5th. The outcome of that meeting was Kenny King offered a match on television that night. King told ROH officials this and the officials warned that he was not allowed under his agreement. King took part in the TV match anyways so ROH made the decision that going forward the company with not being doing business with Kenny King. This also results in him being stripped of the Tag Team Titles, leaving his partner Rhett in a tough spot.

In my opinion, Kenny King made a judgement call. Kenny King is 30 years old with a daughter and has been wrestling with ROH since 2007 and in that time he has never really been pushed hard up until recently. Kenny King is a very underated performer and deserves a chance to shine. My hope that in TNA and maybe even one day WWE, he can do that. At the same time I do not blame ROH for ceasing doing business with Kenny King. King appeared on another wrestling company's television show and without permission. Seems pretty cut and dry to me. However this does leave the company in a bad way. The roster is already thin to begin with and few credible tag teams exist in ROH right now. So hopefully this will inspire the company to bring in more talented wrestlers to help out their roster.

In the meantime, I can only hope for the best for Kenny King. A truly talented wrestler that any company would be smart to sign. I will be sure to watch Destination X this Sunday in the hopes of seeing Kenny King win the X-Division title and have a new King reign in TNA.