CM Punk Anti-hero On the Rise By Dani Mitchell 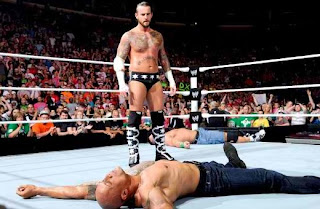 Well after talking about it for months, the WWE finally decided to do what I have been wanting. CM punk heel-turn! Let's face it, CM Punk is the ultimate Anti-hero, you love him for all the reasons you should hate him. Cena's storyline has just been bland as of late , and finally at RAW 1000 the two were to meet.

Cena was suppose to cash in his MITB for a win (never in the history of Money In The Bank, no winner has ever lost when cashing it in). The face of WWE was the first to let it be known when he was going to cash it in, and well what could go wrong with that.. Ohhh yeah I know, the fact that BIG SHOW has it out for you and is bent on destroying you. I mean really would it never cross your mind that he could interrupt the match and cause a DQ , forcing you to ultimately lose your MITB win? Duh.

Well , once the DQ happened, CM Punk looked on struggling with what he should do, when The ROCK entered the ring. The Rock the only man right now the trumphs Cena's popularity wise with all ages. Of course earlier in the night he announced that he was given the chance to face the WWE champion at the royal rumble. This obviously is everything the Punk is against. The fact that he has worked so hard to get to where he is while people like Cena are given all the glory. Cena's the Hulk Hogan of the Industry (just okay skills but loved by all due to his image and like-ability). Now, the Rock who has been off in Hollywood has come back and just automatically given a shot to face the Champ... Of course that is going to piss off our anti-hero. Punk has worked his way up the ladder, He's been a joke, a heel, a face, now we are gonna see heel again. Let's face it... Some Superstars are just more loved, more cheered as Villians. People love the bad guy.

Punk who has been known of setting off "Pipebombs" about the industry and the stars , has said before "the only person better at kissing Vince McMahon's ass (then Cena) was Hulk Hogan" .. then he continued with "Duane's a pretty good ass kisser too". So now, what does CM punk have ahead of him... He's still the WWE Champion, he could be pursued by Cena (although, now I think there is going to be more of a Cena / Show dispute). His Rivalry with Daniel Bryan has gone stale. The Rock obviously isn't going to be back week after week, I suspect we can see him more often though now til Royal Rumble. So whose left... Is he just going to turn on the WWE world, all the fans, and anyone else that gets in his way? And now with A.J. as the RAW GM, hows HEEL CM PUNK going to handle that, we all know he's not one for sucking up to authority figures.

The Weeks leading up to Summerslam are going to be exciting. Storylines are beginning to evolve, change, and take shape. Randy Orton is set to return after his suspension and make an appearance on Raw.. and I am sure the Raw Champion Punk won't hold back his feelings on this. This might be the beginning of some change in the WWE... Could we start weeding our way out of the PG era, and back to the attitude era! We could use it. With way too many faces in the WWE, We need Heels. CM Punk turning heel, Maybe Randy Orton returning as heel (which he does much better than being a face) , there's even been hinting on twitter via Kevin Nash of a NWO revamp/reunion, maybe with a new member or two.. ahem our new heels...Would be an awesome way of kicking off new RAW.

Thoughts as always can be tweeted: @Buckeyebrain

-Dani Mitchell
Posted by WrestleFigsUK at 13:10