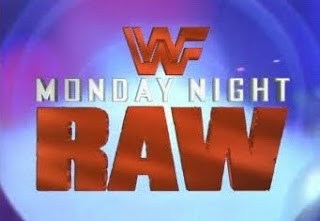 So, next week is Raw 1000. I must be old because I watched Raw 1 and i think Ive seen over 900 of the episodes ever since. I'm either old or I have the social life of Sheldon Cooper with mononucleosis. Raw has become entwined with American pop culture and a world wide event. There are moments in time on Raw that have stood the test of time and make people actually remember where they were. I still know where I was the night Mick Foley won his first world title. I know where I was when they announced Chris Benoit's death. I recall the night Stone Cold came out with the beer truck and the night Kurt Angle brought out the milk truck. For a wrestling fan, Raw is like going to Church. We may not always enjoy the sermon but sometimes we do see miracles take place. This is the countdown of my favorite 5 Raw matches (apologies to Booker T. It's on like neckbones.)

Growing up in North Carolina, you either loved Ric Flair or you despised him. there was no middle ground. As a young boy, I could not stand him. I didn't like his arrogance or his dirty tricks. I didn't like how he always overcame the likes of Sting, Dusty Rhodes, and Nikita Koloff. As I grew older I learned to appreciate more and more of the nuances of his character and became a big fan of his. the same could be said for how I felt about Edge. When he debuted in WWE, I thought he would be around for a couple years and gone to be repackaged as someone else in WCW. He just didn't seem to have a personality for a long time. Then the real Adam Copeland seemed to come out during the days of E&C and I became a fan. When this match took place, Flair was in his twilight and Edge was at his peak. I never thought I would see Flair in a TLC match but it fit his style perfectly. In many ways, Flair was fighting a younger version of himself and everything came together seamlessly in this match.

As some of you who listen to The Still Real To Us show may know, I'm a pretty big mark for Shawn Michaels. He was my favorite wrestler ever since throwing Marty Jannetty through the window of The Barber Shop back in January of 1992. When Shawn came back after his back surgery, you could always tell he was cautious in the ring for the first couple years. He only really wrestled guys he trusted. Then around 2004, he finally trusted his body again and we got to see some incredible matches. One of these was the match with Shelton Benjamin, who in my opinion, is the most athletically gifted athlete the WWE ever had. This match is known for the superkick Shawn delivered to close out the match but if you watch the match, it is a stylistic blend of technical skills and amazing athleticism.

On paper, this looked more like an execution than a world title match. Jeff hardy had only recently embarked on a singles career and had yet to reach main event status in the WWE. The undertaker was going through his American Bad Ass stage in his career and most people thought this was his way to avenge a partial loss he had to RVD just a couple weeks earlier. The match itself may not have been the best ladder match of all time, but in retrospect it solidified Jeff Hardy as a guy who could step onto the big stage and help carry a match. this is also one of, if not the only, ladder match i can recall Undertaker being in. The match really plays on the whole rooting for the underdog vibe. Even if you are not a Jeff Hardy fan, you find yourself pulling for him and hoping he can come out with the win. In the end, you wind up with Undertaker coming out on top but giving Jeff the Rocky_Apollo creed moment of mutual respect.

Now, I am no John Cena fan nowadays. I have not been a fan since he was with B squared in his early rapper gimmick era. But, the guy can put on a good match when he has to and if your wrestling Shawn Michaels then you know you have to. This match was a rematch from Wrestlemania 23 match and this one topped the Wrestlemania match. These two men went at it for over 45 minutes with more near falls than little boys wearing John cena wristbands. There were multiple F-U's and sweet Chin Musics done in the match and no outside interference. just a classic 45 minute match on Raw. I can' even remember when we had a good 30 minute match on Raw. Just a classic of a match between two stars who had tremendous chemistry in the ring. http://www.youtube.com/watch?v=WRk42W0wUVA

This was not their best match between them. This was not the prototypical technical opera that one might expect from these two grapplers. This match was a showcase in story telling and building an angle. A science that seems to be lost in most professional wrestling realms. The match featured two men at the height of their careers telling a story in the ring that was so eloquently done, De Gas couldnt have painted it better. Another great aspect of this match was having Jim Ross and Jerry Lawler call the match along with Stone Cold Steve Austin playing up his heel character. Hearing Ross call Austin a psycho still cracks me up to this day. This match was brutal and hard hitting all the way through and had two spots from the top of the cage; Angle missing a moonsault and Benoit hitting the top rope headbutt. This match is really underrated in the annals of wrestling lore and should be looked upon with respect for the battle waged in the ring and not for what happened outside the ring years later.

That is my rundown for my favorite 5 Raw matches from the first 999 episodes. http://www.blogger.com/img/blank.gifHopefully, You guys will be reading me when we get to Raw 2000 a mere 19 years and 3 months from now. I'll be watching. maybe Bob Backlund will be there for that one too. Until next time, It's been OBVIOUS!

Be sure to check out The Still Real To US show every Thursday at http://wrestlechat.net or http://facebook.com/WLH11
Posted by WrestleFigsUK at 13:58