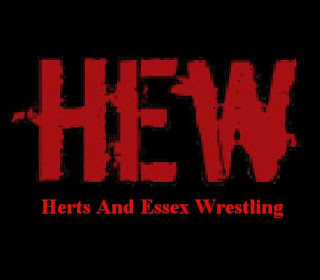 HEW’s Age of Blaze had a strong buzz going in, the poster alone is easily my favourite event poster HEW have produced, following on from the heated ending at the end of the last show. The word certainly seems to be spreading as every seat in the building was taken, the staff even had to take down one of the merchandise tables to make space for the extra crowd. On paper the card stood out a bit featuring for the first time in ages the Devil’s Playboys weren’t booked and the first time in even longer none of the Knights were on the card. It also featured an extra match giving the crowd on hand more bang for their buck. The production over the last few shows has also stepped up for each show with this one looking as professional as any other match has. While there were some last minute changes to the card the matches everyone had come to see were the same.

The match that opened the show featured “World of Sport Legend” Danny Boy Collins taking on Marco Marinelli in a fantastically hot opener. Collins can move as well as some of the cruiserweights on the scene right now despite having 15-20 years on some of them. Marco plays the evil foreigner very well but it was Danny who was bending the rules to get, at times, unfair advantages, including getting a number of kids from the audience to grab Marco’s legs and post his on the ringpost. While Marco had control for most of the match up Danny managed to grab a flash pin for the finish with the crossbody, considering he is the HEW no 1 contender it makes the most sense for him not to be beaten before he faces Erik Isaksen.

The next match of the night featured Danny Blaze taking on ‘the Bully Buster’ Milky O’ Hagan. I can’t decide if it is a stroke of genius or a stroke of irony having a skinny, pasty ginger guy playing a bully buster character but the kids in the audience seem to have really connected with him. It also helps that Danny seems to be one of the most hated people on the roster right now, this match does seem a step down for him thought when you look at the level on some of his other opponents. That didn’t seem to stop Milky bringing his working boots and at times looking like he could pull off the upset. Danny pulled off the win in the end by hitting his new impaler/unprettier finish, the End of Blaze, pulling Milky up at 2 and rolling him over into the crossface for the submission win.

The last match of the first half saw the HEW debut of King Kendo, accompanied by Jetta, as he took on Brad Slayer. Kendo was sporting a lot of the old Kendo Nagasaki gimmick with the entrance robes as well as the ceremonial salt throwing at the start of the match. I noticed a couple of Brad Slyer shirts in the audience showing how you don’t need to win all the time (I don’t remember Brad’s last HEW win offhand) to get over with the crowd. The match started off with Brad getting most of the crowd to get on the case of Kendo setting the pace for the rest of the match. Jetta wasn’t endearing herself to the crowd much by interfering whenever she could. Eventually Brad ducked a baseball slide from Kendo that took out Jetta. It still didn’t help Brad who was flattened by a Vader Bomb for the Kendo win.

The first match of the second half saw Mitchell Starr take on Aaron Frost. Originally Aaron was supposed to be facing Danny Collins to decide the undisputed number one contender following Aaron being taken out before his title match back in January. Mitchell seems to improve every time I see him with his inring work getting smoother, his gear is looking the part and he has the attitude to match. The match went together really well with both guys looking great. One botched spot does stand out in my mind where Aaron went for a frog splash and Mitchell rolled the wrong way taking Aaron’s knees across his back. The match picked up again after that leading to Aaron picking up the win with his finish.

The next match saw the ladies mix it up with Skarlett taking on Finland’s Aurora Flame. I don’t know if it was the fact it was the first HEW women’s match (to my memory) that didn’t feature a Knight but the crowd really weren’t into it. Skarlett tried her hardest to get the crowd into the match. Aurora didn’t seem to have the same connection, while technically there was nothing wrong with what she was doing and she definitely has a good look, she seemed to lack any character and didn’t have any real fire to what she was doing. Skarlett dominated a lot of the match with her submission moves but eventually lost to a surprise roll up. She didn’t react too well to this as she fought Aurora all the way to the back.

The main event saw Death Row (The Rage and Dominator), accompanied by Danny Blaze and Skarlett, take on the Young One (Alex Young and TJ Daniels) for HEW contracts. The match itself made a lot of sense. When Death Row attacked the Devil’s Playboys at the end of the last show it was the Young One’s who they’d just beaten and with the Playboys banned from the arena it the Young Ones were the logical choice to take their place. The trouble is it made it difficult for the crowd to believe the Young One’s could ever really win it as they wanted to see Death Row/Playboys and only a Young Ones loss would lead to this. That didn’t stop the Young Ones from putting on some entertaining sequences with the two bigger men. The trouble is, from where I was sitting, the most entertaining thing was when Skarlett and Danny Blaze hijacked the announce table. Death Row picked up the win following The Rage’s moonsault, which was impressive not only because of Rages size but the height of the ceiling in the venue as well.

Much like the last show it was what happened after the main event that the crowd really got behind. Following the match the Commissioner informed Death Row that while they had won contracts they weren’t allowed to come into contact with the Playboys outside of a sanctioned match. Danny then got on the mic and claimed that with the match done Death Row were now officially employed and it was time to go and walked out the door. There was a crash heard outside and Danny crawled in bleeding. During the commotion the Devil’s Playboys had snuck in behind Death row and a massive brawl erupted between the two teams resulting in the whole locker room coming down to try and pull them both apart. Eventually Commissioner Cox split them up and informed them that if they weren’t to touch each other again if they wanted to have a match. The challenge was then made and accepted for the next show to feature the two teams facing off in a Street Fight for the Playboys Tag Titles at the next show in Braintree with the added stipulation that if the Devil’s Playboys won then they would have 5 minutes in the ring alone with Danny Blaze.

The last few HEW shows have certainly all been worthwhile lately. The always hot crowd seem to be really behind the Age of Blaze/Devil’s Playboys rivalry. The lack of the Knights and the Playboys surprisingly didn’t stand out too much as the rest of the roster more then made up for the gap they left. The build up to the next showhttp://www.blogger.com/img/blank.gif has been incredibly well done and I’m more then looking forward to heading to Braintree to check it out. While there was no standout match the overall story of the Age of Blaze takeover more then made up for it. I only hope that the Braintree main event payoff lives up to the hype.

For more on HEW check out www.hewwrestling.com

For feedback you can find me on twitter @el_j
Posted by WrestleFigsUK at 09:15