Undertaker vs Kane in 2010 -WHY?? By Shaun Nichols 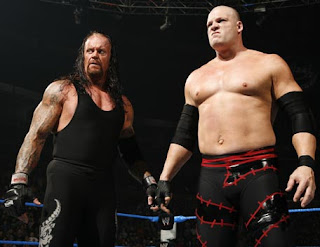 If you to were to blindly follow the WWE' s view then you would say that the Undertaker vs Kane is one of the great WWE rivalries of the last 20 years, that is something that I cannot agree with. Let me explain why.
If you had to explain this feud to someone who had no interest in wrestling and also did not know who these guys are, how would explain it? Well here goes, the Undertaker who arrived first as the elder brother and was successful in the company winning titles and becoming a main eventer. Several years later his younger brother appears apparently unhappy with how his elder brother treated him in the past to get revenge. This idea can work great for example the 1994 feud between Bret and Owen which was centred on Owen feeling that Bret wanted to keep him in the background which bred Owen's jealousy however the feud lasted months and featured some fantastic matches. Now also remember this feud as being fought on and off for the last 13 years, not 13 months but years it's ridiculous. Worse still everytime they feud it is exactly the same feud, Kane as the heel becomes jealous of the Undertaker and off they go with matches which are typically boring and don't particularly draw very well. The Undertaker always wins in the end and will no doubt win again this time. N£0 wrote in his review of NOC that you aren't going to switch channels during Taker-Kane, well because I didn't watch it live I had the option to fast forward and move onto the next match which is exactly what I did. Throw in the which wrestler has magic powers to turn off the arena lights at will or to disappear whenever they want to and are you losing interest yet?
I will give Kane credit on his delivery on his promos, it is just a shame that he is talking a lot of shit about being the most powerful demon or some such thing. These promos are typically taking over 15 minutes TV time and the Undertaker's interviews are only ever effective when they are greatly restricted in numbers, having him talk week after a week is just foolish. To up the ante or increase the ludicrous nature of this feud, Paul Bearer was brought back who despite being the victim of being buried in concrete at the Great American Bash 2004 by the Undertaker, as not only forgiven his former charge but as somehow restored the Undertaker's magic powers. Now despite this being in a lot of ways quite a camp feud which you can't really take it seriously, the WWE see this currently as the main PPV draw for both the Night of Champions and the HITC PPV on 3/10/2010. Which again is one of the reasons why buyrates are really struggling especially in the US.
Also ask yourself if here in the UK you had to buy the NOC PPV on Sky box office would you have paid for it? I'm guessing not.
Posted by WrestleFigsUK at 07:07