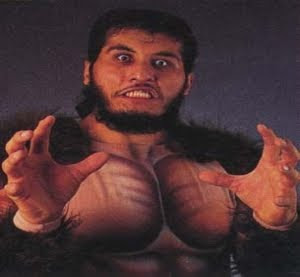 The local media in Argentina is reporting the passing of Jorge Gonzales, who wrestled for WCW as El Gigante before moving onto the World Wrestling Federation as Giant Gonzales. Gonzales, who was very ill with complications of diabetes and other physical issues stemming from his 7’7″ height, was 44 at the time of his death.

Gonzales was a basketball star in his native Argentina before being drafted by the Atlanta Hawks. After he failed to make his mark, Turner Broadcast shifted his contract over to World Championship Wrestling. Gigante debuted at the Capital Combat 1990 PPV, coming out during a Ric Flair vs. Lex Luger steel cage match as a surprise.

Gigante worked from 1990 through 1993 for WCW, including a house show run where he challenged then-NWA champion Ric Flair. Although at his height, there was some attention and interest in him due to his size, he was never considered a great in-ring performer and was extremely limited.

Gonzales was signed by WWF in early 1993 and debuted at the Royal Rumble that year as a massive giant (complete with airbrushed, furry body outfit), attacking and laying out The Undertaker. That set off a feud between the two that went back and forth for months, including a Wrestlemania match at Mania IX in Las Vegas.

WWF built Gonzales as a huge monster, including angles where he laid out all the major babyfaces of the era at house shows, including Randy Savage and Curt Hennig. Gonzales was managed by Harvey Whippleman during the run, where ended after a Summerslam loss to Taker in a “Rest in Peace” match. WWF set the stage for Gonzales to turn babyface but he soon left the company afterward.

Outside of the United States, Gonzales made a few appearances for both New and All Japan Pro Wrestling and appeared in a memorable episode of “Baywatch” where he played a sad, bullied giant.

After his WWF run ran its course, Gonzales returned to Argentina, where it was said he owned and ran a farm. Last year, he was scheduled to return to the United States for a convention appearance, but his health took a turn for the worse and he canceled the appearance not long after it was announced.