Matt Hardy: What's With This Guy By Stuart Rodgers 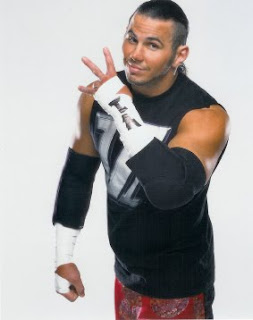 Matt Hardy is creating an internet buzz at the moment but the last time he was big on the internet for his personal life was in 2005 when his relationship with Amy Dumas (Lita) was ripped apart after Dumas had an affair with Edge. Hardy got the sympathy vote from the fans but it still led to him being released by the WWE which led him to do a few dates on the indy scene more notably ROH. But soon enough, he was back in the WWE and the real-life situation between himself, Lita & Edge was turned into an on-screen angle which because it was pro wrestling made a lot of fans think it was a work in the first place. Fast forward to 2010, his brother Jeff is in TNA and despite people trashing TNA's product and saying that WWE is far superior to the TNA group Jeff seems happy at where he is now and sometime ago there was a page on facebook set up entitled 'Free Matt Hardy' and now with all Hardy's crazy antics on twitter and youtube is a release exactly what he is aiming for? After listening to the current Still Real To Us podcast (link on my page) the hosts seem to think that if Matt was released and after 90 days went to TNA to join Jeff it wouldn't be that big of a deal but yet, they also say the reason he hasn't been released is because WWE fear Matt will go to TNA to give us a Hardy Boyz reunion. I really don't know what to make of this whole thing really, but it could be a work, maybe WWE are willing to try a different route away from their current product, maybe they want to create a new 'Loose Cannon' character. I think though he wants his release, wether to go to TNA or not, I just think Matt Hardy wants out of the WWE. I would like it to be a work in a way and see WWE go down this route of having Matt as a 'loose cannon' character because the direction the WWE is going no isn't the best really. We'll have to wait and see.
Posted by WrestleFigsUK at 21:51