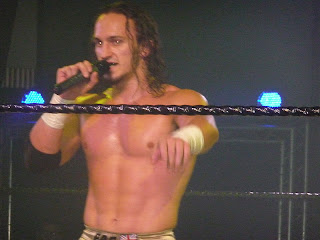 Congratulations go to PAC who won his first singles Dragon Gate championship in Fukuoka on August 29th. He won the Open the Brave Gate title, which is DG's secondary singles belt. The title was vacated by Masato Yoshino after he was victorious in a title vs title match against Osaka Pro's Tigers Mask on August 14th.
The championship was decided in a eight man tournament held in front of nearly 2500 fans. During the tournament PAC secured wins against Genki Horiguchi in the first round, in the semi finals he defeated KAGETORA. Which set up a final against current co-holder of the Open the Twin Gate titles Susumu Yokosuka. After 20 minutes it was PAC that emerged triumphant after nailing Yokosuka with the Shooting Star Press to claim the gold.

To follow whats happening in Dragon Gate including results, schedules, archives and roster information. I recommend http://dgusa.puroresufan.com which I think is a great site.
Posted by WrestleFigsUK at 14:18