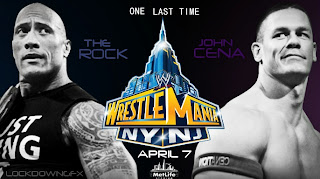 Wrestle Mania is on the horizon, once in a lifetime will now be twice in a year and everyone is asking, will this be the year the streak ends?

Yes, John Cena will once again face The Rock at Wrestle Mania, the fact it's happening again is not why I wanted to write about this it's because there still seems like there are issues with Rock being on the show taking a spot away from another guy on the roster. It's fair to a point, maybe one of the younger guys could get some good exposure and the 'rub' but in the bigger picture, it's a business for the WWE and along with the live gate they expect in excess of a million PPV buys and it will all trickle down and the guys on the undercard and they will get a bigger payday than normal. I just can't see why there is an issue here.

On the wrestling side of things, people are harping on about the fact last years encounter between Rock & Cena being 'once in a lifetime' but they are doing it again this year and let's be honest, business decision aside, Cena had to be given his chance of retribution. The Rock has been featured quite a bit on WWE TV this year, yes he has movies coming out but let's not forget,he's not an actor in the WWE, he is a WWE wrestler who made it big in Hollywood. Like with the Wrestle Mania buy rate, I would imagine, when Rock is involved on RAW, those segments are probably some of the more higher rated parts of the programme.

It would be a surprise to me I must say if The Rock came out of Wrestle Mania with the WWE strap, I fully expect Cena to beat him for it but I don't necessarily think Cena will leave the Met Life stadium as the champion. I said above how there maybe other wrestlers who should be elevated further up the card and given their chance at the top of the card at Wrestle Mania but for the reasons alreay stated, i think they were always going with Cena/Rock II but there is a young man working in the WWE right now who gets a hell of a lot of plaudits and he carries around a briefcase with a contract that guarantees him a shot and any title in the WWE, yes, my call is at Wrestle Mania after John Cena defeats The Rock to once again become the WWE champion, Dolph Ziggler will cash in his Money in The Bank shot and win the WWE title. I imagine there will be many that will totally dismiss this but this is what I think will happen so we'll just have to wait and see. 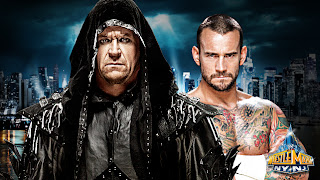 The other big match set for Wrestle Mania is of course The Undertaker vs CM Punk. Will Wrestle Mania XXIX be the one that the streak finally goes, should the streak ever end, if so, is CM Punk the man that should be the one to end it? Three questions that dominate a lot of wrestling podcasts and websites, my thoughts, well, looking in from the outside as someone who doesn't really watch the WWE's product but was watching up until The Undertaker got to about 11-0 I'm undecided to be honest. The Undertaker doesn't have much left in the tank, I've heard plenty say he should be able to retire with the streak intact because it's gone on for 20 Wrestle Mania's what would be the point of ending it? The Undertaker has been a great servant to the WWE, he has been very well paid for the privilege but still, the thought of retiring being undefeated at Wrestle Mania is a big thing. I said above I was undecided but now I think he'll go over Punk and then come back for one final Wrestle Mania to make it 22-0 at the 30th show.

I do look forward to see how this all pans out both with Rock & Cena and if my prediction comes to fruition about Ziggler and I am interested in seeing if indeed CM Punk can end the streak or The Undertaker rolls on for one more Wrestle Mania.

Feel free to tweet me @WLHSTU with any thoughts/comments on this article.

This has been Stuart Rodgers, owner of http://wrestlingslasthope.com