PBW Live At The Pavilion Review By Calvin Berry 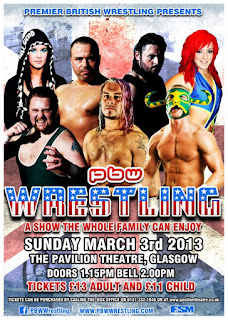 In what was a big day for wrestling in Glasgow Premier British Wrestling kicked it off with an entertaining show at the Pavilion Theatre.

Returning to the Pavilion for the second year in a row, PBW put on a show full of top action that kicked off with the PBW Tag Team Titles on the line as Blaze and Rampage faced off against against one of the best tag teams in the UK today, Project Ego.

This was a good way to start the show with a fast paced tag team match and the crowd was fully behind the team of Blaze and Rampage as Project Ego’s antics wound them up. Blaze and Rampage finally managed to retain the titles after a double muscle buster on Martin Kirby.

The 2012 King of Cruisers Noam Dar was in action next as he took on Red Lightning.

This was a fun comedy match with the crowd trying to put Red off during the bout by chanting “chubby” at him as Noam Dar egged them on. Red Lightning had the last laugh however as he pinned Dar to win in a roll up with his feet on the rope out of the ref’s sight and Red left laughing at the crowd saying he was “off to KFC.”

It was time for the first half main event as Wolfgang, TJ Rage, James Scott and Jack Jester battled in a fatal four way to determine the number one contender for the PBW Heavyweight title.

Wolfgang struggled in the early stages as TJ Rage, Jester and James Scott teamed up on him however the three began to argue over who would pin Wolfgang and the action broke out all over the Pavilion with Jester and Wolfgang fighting their way through the crowd!

Wolfgang finally managed to pick up the win, piling the three on top of each other, hitting a Senton bomb on them and covering all three at the same time to become the number one contender for the PBW Heavyweight title and end the first half on a high.

Back from a short break the action resumed with a rematch from last year’s PBW show at the Pavilion as Colosus Kennedy with Charles Boddington took on ‘The Mexican Sensation’ El Ligero.

Colosus Kennedy was out for revenge after Ligero picked up the win last year and he dominated most of the match using strength and with some help from Boddington at ringside.

Boddington’s interference however backfired as he laid out Colosus his briefcase when trying to hit Ligero and after laying out Boddington with a super kick, Ligero hit Colosus with a top rope splash and covered to pick up another win over the big Russian.

There was some mixed tag team action next as the team of Stevie Xavier and Kay Lee Ray took on Carmel and the PBW Heavyweight Champion ‘Bad Boy’ Liam Thomson.

It was main event time and it was a Battle of Britain main event as Scotland’s BT Gunn took on ‘The Showstealer’ Nathan Cruz from England.

The crowd in Glasgow was firmly in the corner of BT Gunn as he entered the ring with a Scotland flag and the two put on a really good main event as they battled for the victory.

BT Gunn was able to pick up the victory after a top rope elbow drop to end the show on a high note and send the fans home happy.

PBW Live at the Pavilion was a really good event in front of an impressive crowd of over 800 fans who packed in to watch a fun show full of top action. Hopefully PBW will return to the Pavilion sooner rather than later.
Posted by WrestleFigsUK at 01:12